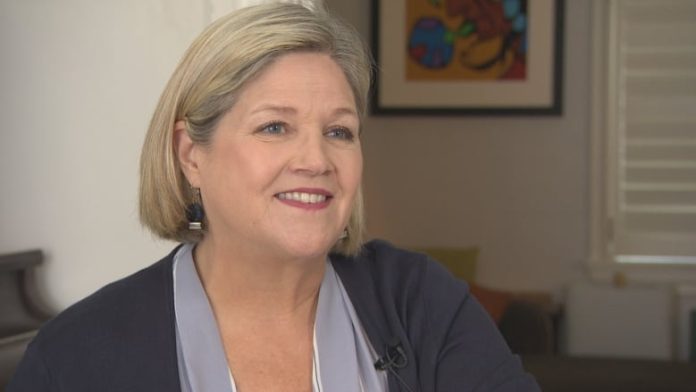 Andrea Horwath says she is running for mayor in Hamilton to help the city “realize its potential.”

The former leader of the Ontario New Democrat Party (NDP) is set to make a formal announcement Tuesday morning that she will leave her post as MPP for Hamilton Centre to enter the mayoral race.

“The work I’ve done all my life has been for Hamiltonians and this would be a really exciting time to be part of the realizing of the great opportunities that are ahead of us,” she told CBC Hamilton in an interview on Monday, ahead of the public announcement.

“Like most Hamiltonians, I’m a fighter. I don’t give up until the job is done and I’m also prepared to do the hard work,” Horwath said.

Horwath, born and raised in the city, was Ward 2 city councillor from 1997 to 2004 before becoming Hamilton East MPP for the NDP. In 2007, she became Hamilton Centre MPP and eventually leader of the Ontario NDP.

During her time as leader, she helped the NDP go from not having official party status to being official opposition twice. The party won 40 seats in 2018 but the recent election in June saw that number decrease to 31.

She announced her resignation as party leader the evening of June 2, once results came in. In the weeks that followed, speculation that she might run for mayor grew.

“At this stage in time, the best opportunity for me to work on behalf of the people of Hamilton Centre and the entire city is in the mayor’s position … the work I can do will be much more impactful,” she said.

Horwath didn’t offer many details about specific policies or actions she would take as mayor, saying she is in the “vision” stage of her campaign and will be hearing more from residents as a next step.

When asked what she saw as the top three issues for city residents she said “that’s part of the conversations I’m going to be having over these next number of weeks.”

She did however share thoughts on several issues, from road safety to climate change to the bid for the Commonwealth Games.

Horwath did say she doesn’t want to expand the city’s urban boundary and wants to ensure the city continues to grow without losing the “unique character” of the communities within Hamilton.

She also said residential zoning should focus on meeting people’s needs rather than just increasing the number of units.

Horwath didn’t share her view on the city’s approach to encampments, which has involved tent teardowns across the city, but said there needs to be “collaboration” with various levels of government and community agencies for more support on sometimes related issues such as addictions and mental health.

Horwath said she sees road safety as a key issue in this election and praised some of the city’s recent efforts to improve safety by aligning with a Complete Streets approach.

“But also, we need to work on raising the awareness of drivers … in terms of the car and what it can do to hurt other road users,” she said. “We need to remind people that driving is a responsibility and not just a luxury.”

Horwath added that greater use of public transit, especially with the development of the light-rail transit (LRT) line, will help alleviate traffic on roads. She wouldn’t say if she thinks area rating — which sees residents pay some taxes only for the level of services they receive in their area — should be eliminated, only saying it should be a community discussion.

When it comes to climate action, Horwath said the city needs to make all of its decisions through a climate lens instead of a separate department or priority.

On Indigenous reconciliation, Horwath said consultation with Indigenous groups should be proactive and done at the earliest of stages on any project or discussion. When it came to the future of the John A. Macdonald statue, which was toppled last summer, she said it wasn’t her decision to make but one the community had to lead on.

When asked about fighting local crime, Horwath said both policing and support for vulnerable youth are important, and she praised initiatives like COAST, which pairs police with social services.

While she said it’s important to allow community agencies to help manage mental health crises in the community, she didn’t say that would prompt a change to police funding.

“I don’t know if it’s a matter of an increase or decrease in budgets … it’s about the people who need the services and how to prevent the services from being put on an organization that doesn’t have that mandate,” she said.

As for a bid for Hamilton to host the 2030 Commonwealth Games, Horwath said hosting such an event can bring many positives to the city’s “sports loving” residents and potentially help with other city issues. “What I would hope is there are positives that come as a result of hosting,” she said.

Ward 4 Coun. Sam Merulla, who also isn’t running for re-election, worked with Horwath between 2000 and 2004, when they both were councillors.

He said Monday he was encouraging her to run.

“More so than ever before, we need a strong person with the experience, strength and relationships at all levels of government that will get the job done,” Merulla wrote in an email to CBC.

“Being mayor isn’t an entry level position … Andrea was there with me at the beginning of the renaissance in this city.”

Bird said Horwath will have some advantages in the race such as name recognition and a “real positive association with Hamilton.”

“She’s well-known, she’s highly experienced, she’s a serious candidate and people will be interested in her for that reason,” Bird said of Horwath.

Although Bird — whose work focuses on the political representation of women and marginalized groups — said Horwath will likely have to reckon with the gender bias of some voters.

“It’s still unfortunately a persistent issue, so that can present a barrier to Andrea and to women in general running for the role of mayor,” she said. “Yes, she has a shot, but it’s not a cakewalk.”

Bird said Horwath is a “supremely talented” politician but noted Horwath’s unsuccessful attempt to become Ontario premier could hurt her.

“A lot of people may see her as not part of a change, but part of a history as something we’ve tried before,” Bird said.

“They may see her also as someone who’s not been successful at a provincial level.”