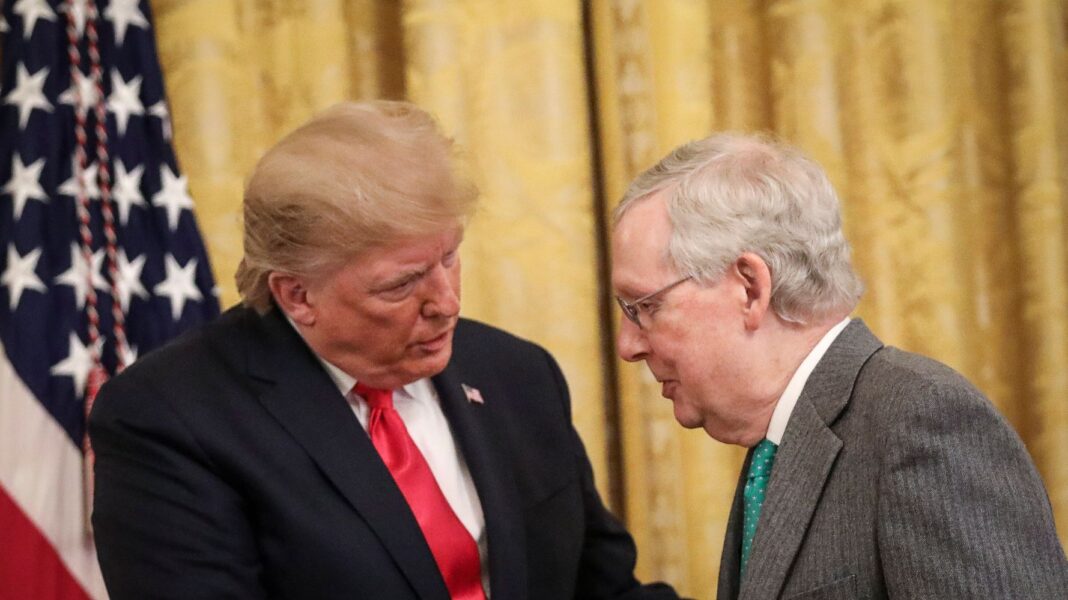 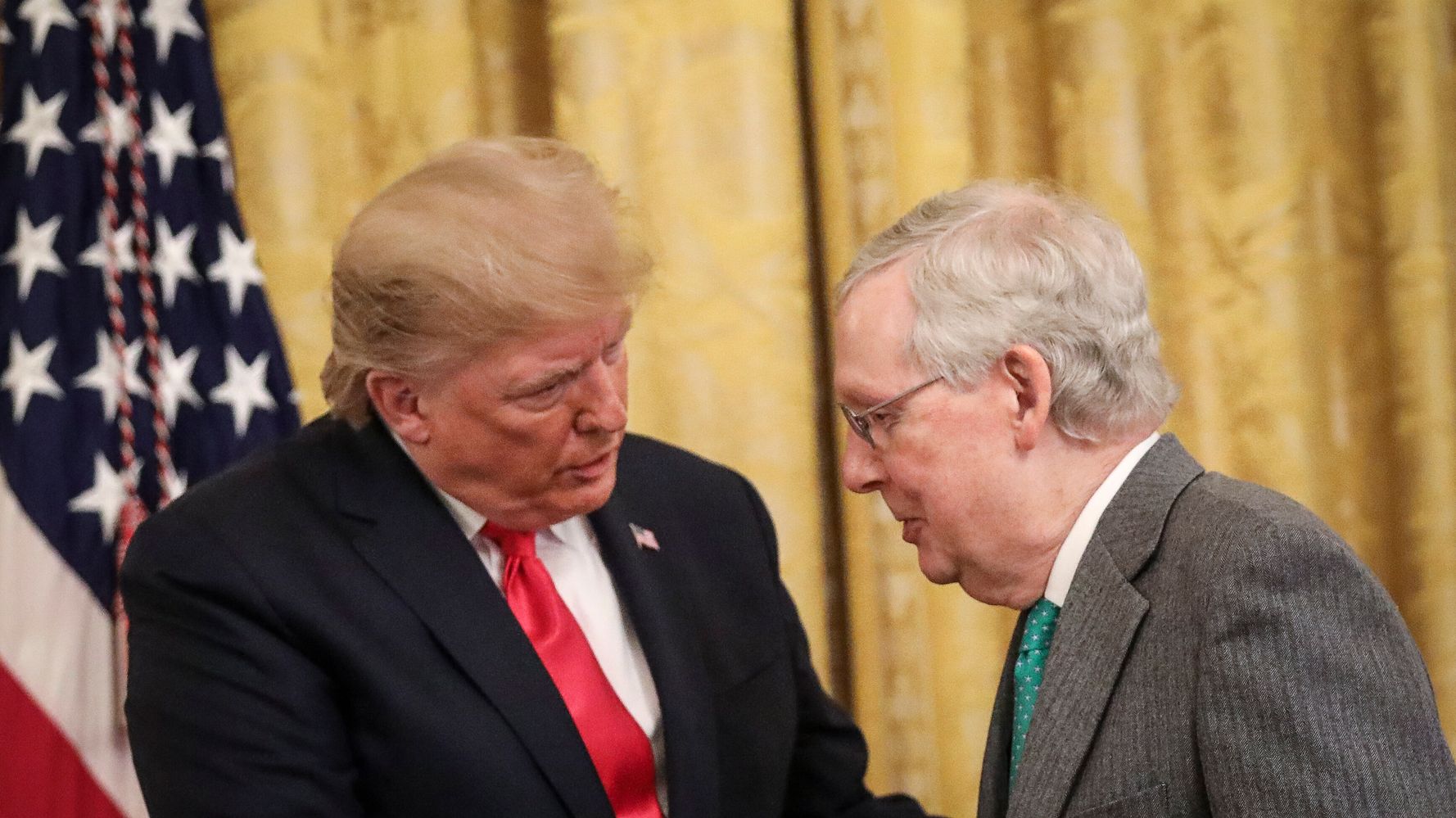 Polities Impeachment Trial Rigger For Donald Trump is Mitch McConnell’s New Legacy, Polities  ― Years after professing admiration for the “Great Compromiser” Henry Clay but then engineering a dramatic remake of the federal judiciary, Mitch McConnell is now earning a different legacy: The guy who rigged a Senate trial to protect a president impeached for trying to cheat his way to reelection.

With even members of his own caucus agreeing that Donald Trump behaved badly by leveraging $391 million in taxpayer-funded foreign aid to damage a political rival, the Senate’s majority leader is on the brink of acquitting Trump without hearing from a single witness ― defying the three-quarters of Americans who say they want witnesses.

“Sadly, the constitutional travesty that he orchestrated here will serve as his legacy,” said George Conway, a prominent Republican Trump critic and husband of a top White House aide. “Not the legions of fine judges he has put on the bench, judges of the sort that would have been nominated by a President Pence even if Trump had been removed, as he rightly should have been.”

An aide to Senate Republican leadership, speaking on condition of anonymity, rejected the idea that protecting Trump would become the most noteworthy part of McConnell’s record. “If you don’t think his legacy on courts and the Merrick Garland decision will be at the top of his legacy then you just aren’t in touch with reality,” the aide said, referring to McConnell’s decision to block former President Barack Obama’s choice for a Supreme Court vacancy and instead to leave it open for the next president.

History is going to remember him not for being a great legislator, but as a wingman to Donald Trump. He’ll be seen as the leading sycophant to Donald Trump.
Rice University historian Douglas Brinkley

Other Republican defenders said McConnell was simply doing what both his constituents in Kentucky as well as most Republicans nationally wanted him to do.

Missouri Republican Sen. Roy Blunt said McConnell handled the situation properly. “I don’t think the leader is affected in any way by trying to figure out how to move through that and get to the work that needed to be done,” he said.

“You play the hand you’re dealt,” said Scott Jennings, a Republican political consultant who has worked for McConnell’s campaigns, adding that steering the GOP caucus toward removing Trump from office was never a possibility. “I don’t know that that’s Mitch McConnell’s decision to make.”

Yet that was precisely the decision that Arizona GOP Sen. Barry Goldwater made in 1974, when he visited President Richard Nixon at the White House to tell him that he and many other Republicans in the Senate would not support him in an impeachment trial. Nixon announced his resignation the following evening rather than face removal for using the powers of his office to cover up his campaign’s break-in at the Democratic National Committee.

“It’s like Nixon redux,” said Rice University historian Douglas Brinkley. “When the conservative leader of the Senate found out he had been lied to, he balked at Nixon. And he has a fine place in history. Mitch McConnell is going to be remembered as a lackey for Trump.”

From Henry Clay To Donald Trump

Thirty years after McConnell was first elected to the Senate in 1984, Republicans took control of the chamber, elevating him from minority leader to majority leader and thereby allowing him to realize a lifelong dream.

Just a few years earlier, he had famously declared that his top priority was to make Obama a one-term president. Obama had nonetheless won reelection in 2012, and McConnell spoke in conciliatory tones about working with the Democratic president on bipartisan priorities.

In a news conference after the 2014 midterm election, McConnell said he wanted the chamber to start working together for the common good again, as it used to. “The Senate in the last few years basically doesn’t do anything. We don’t even vote,” he said.

Whatever comity McConnell might have hoped for, however, dissipated when he essentially ended judicial confirmation hearings for Obama’s picks, and then vanished entirely when he refused to even acknowledge Obama’s nomination of Garland for the high court after Justice Antonin Scalia’s death.

Then, when Trump unexpectedly won the 2016 election, McConnell suddenly had the opportunity to fill, assembly-line fashion, over a hundred federal court vacancies he had helped hold open with conservative nominees pre-screened by the Federalist Society.

It is also a squarely mainstream Republican agenda, along with tax cuts and regulatory rollbacks ― all of which Trump, who has little personal knowledge or interest in legislation, was happy to give him and House GOP leaders.

Which was the state of affairs right up until an intelligence community whistleblower’s complaint in August accused Trump of trying to coerce Ukraine into conducting investigations politically useful to Trump by withholding a White House meeting and $391 million in military aid.

House Democratic leaders began an impeachment inquiry, then formal proceedings, and just before the Christmas recess, voted to impeach Trump ― dropping the question of whether to remove Trump directly into McConnell’s lap.

An Acquittal For The History Books

On Friday, Rep. Jason Crow, a Colorado Democrat and one of the House’s impeachment “managers,” asked at the trial: “What do you want your place in history to be?”

If the question was designed to shame Republican senators, it appears not to have had that effect ― and certainly not with McConnell, who wore a broad grin after Democrats’ attempt to open the proceedings to witness testimony failed by two votes.

That tally capped Senate Republicans’ implicit approval of Trump’s unprecedented stonewalling of the House. In sharp contrast even to Nixon, Trump refused to turn over a single requested document and ordered all executive branch employees not to testify.

McConnell openly telegraphed his intention to stand with Trump even as the House was completing impeachment proceedings in December.

In a Dec. 12 appearance on Fox News, McConnell said there was “zero chance” Trump would be removed from office. “I’m going to take my cues from the president’s lawyers,” he said. “We’ll be working through this process hopefully in a fairly short period of time, in total coordination with the White House counsel’s office and the people who are representing the president.”

Indeed, on Friday, McConnell made sure to get Trump’s approval of his plan to finish the trial with a Wednesday acquittal before announcing it on the floor.

“McConnell will always be remembered as the majority leader who turned the United States Senate into a kangaroo court in order to save Donald Trump from being justly convicted and removed from office,” said Rick Tyler, a GOP consultant and former aide to Texas Sen. Ted Cruz’s 2016 presidential campaign.

Other Republicans, among them Trump critics, said McConnell’s push to get conservative judges will ultimately outweigh his facts-be-damned acquittal of Trump. “If the judiciary rules in a more conservative direction for the next 20 years, the trade-off for what a few insiders may view as a legacy seems unimportant in contrast,” said Rory Cooper, once a top aide to former House Majority Leader Eric Cantor.

One McConnell supporter, a former Republican National Committee official who would only speak on the condition of anonymity, even cited Trump’s vindictiveness and the fanaticism of his core supporters to justify McConnell’s approach. “Removing Trump would have ignited a firestorm from which we will not recover,” he said. “I think prudence dictates they did what they did.”

Historians, though, were dubious that McConnell’s name will ever be disentangled from Trump’s, especially decades after they are long gone, when all the details of Trump’s Ukraine scandal will finally come to light.

“Mitch’s hero was Henry Clay, his role model was John Sherman Cooper,” laughed Norman Ornstein, a congressional scholar at the conservative American Enterprise Institute. “Nobody has done more to blow up the rules and norms of the Senate and destroy its integrity than McConnell. I knew John Sherman Cooper, and he would be appalled by his onetime protégé. The way he has handled impeachment is in some ways an extension of his utterly immoral behavior, but very likely it will lead the obituary.”

And Brinkley, the Rice University professor, said whatever thoughts McConnell might have had for being known as a Senate institutionalist are gone forever. “History is going to remember him not for being a great legislator, but as a wingman to Donald Trump,” Brinkley said. “He’ll be seen as the leading sycophant to Donald Trump.”