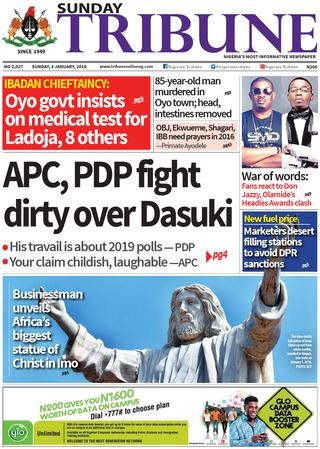 AS the ‘ember’ months draw near, the Oyo State police command has urged residents of the state to go about their businesses without fear as it had adopted strategies to tackle crime and criminals in the state.

Speaking during a parade of suspected criminals at the police headquarters, Eleyele, Ibadan, the state Commissioner of Police, Mr Abiodun Odude, said “as we would be transiting to the ‘ember’ months of the year, it is customary for citizens to express some fears of an increase in criminal activities.

“Conscious of this, we are determined to allay such fears by insulating the state from any form of criminal activities before, during or beyond the period.

“To this end, we have put in place new robust security strategies while reviewing the existing ones so as to curb crimes and criminality in the state,” Odude said.

He said a total of 10 suspects were arrested with five nabbed for armed robbery, two for burglary and three for stealing.

According to him, five locally-made pistols, 12 ammunition, four vehicles, one motorcycle, a CCTV decoder, jewellery, mobile phones and laptops were recovered.

Among the suspects was Lateef Olalekan, a 37-year-old automobile electrical engineer (rewire), who was arrested for stealing a Toyota Corolla with registration number GGE 67 DE belonging to one of his customers.

According to the police boss, the suspect had made an extra car key when his customer took the car to him for repair.

“After a couple of months, the suspect used the duplicated key to remove the car from where it was parked by the owner at the Oke Bola area of Ibadan three months ago.

“Operatives of the Special Anti-Robbery Squad (SARS) of the command, on July 12, finally arrested the suspect with the car during a routine patrol at the Apete area of Ibadan,” Odude said.

The police were also able to arrest suspected members of an armed robbery gang that had been terrorising residents of Ehin Grammar, Ayegun, Odo-Oba and other areas of the capital city. He said five guns were recovered from them.

The commissioner revealed that in one of the gang’s operations during the last Eid-el Fitr celebration, the suspects attacked several houses and robbed victims of mobile phones, cash and other property.

“During the robbery, the gang, comprising Jamiu Morufu (24), Sunday Peter (27) and Mohammed Azeez (28), killed a night guard and shot another victim in the eye.

“The suspects were picked up at their various hideouts in Ibadan while planning to carry out robbery operations in parts of the metropolis,” the police boss said.

Another paraded suspect, Victor Joseph (25), had allegedly stolen an Acura MDX saloon car marked KJA 170 DS from where it was parked at Allen Avenue, Ikeja, Lagos.

The suspect was arrested on July 18 at about 11.00 p.m. at the Lagos-Ibadan old Toll Gate while driving it into Ibadan, where a yet-to-be identified receiver was waiting.

Odude said the suspects would be charged to court upon completion of investigations into their cases.

The post Police strategise to curb crime in ‘ember’ months in Oyo appeared first on Tribune.