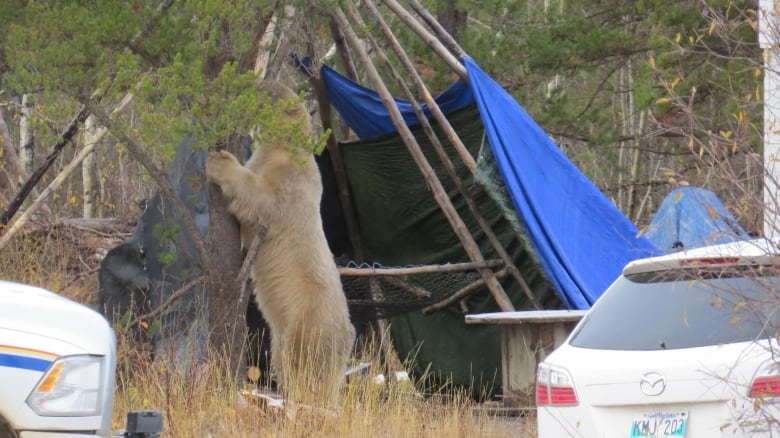 A polar bear is running loose in and around a northern Manitoba First Nation, the chief says, a fairly rare sight for the remote community more than 100 kilometres from Hudson’s Bay.

Shamattawa First Nation Chief Jordna Hill says it was first spotted about four days ago and hasn’t yet been apprehended by conservation officers.

“It’s kind of scary for us, the community members and everybody else,” he said.

It’s been several years since a polar bear was last seen in the community, Hill said. CBC News last reported on a sighting in 2010.

Hill said conservation officers struggled to find the bear over the last few days and told him they will return on Tuesday to take up the search again to relocate the bear further from civilization.

Doug Clark, an associate professor at the University of Saskatchewan’s school of environment and sustainability, says it’s not unheard of to see a polar bear stray that far away from Hudson’s Bay.

“It’s only 130 kilometres from the coast and for a polar bear, that’s not a particularly big distance. Polar bears have been observed in that part of the province before,” he said. One of Clark’s areas of research is polar bear and human conflicts.

“The bear … is doing what polar bears do when they come to communities. They’re responding to attractants that they’ve smelled and they’re looking for things to eat.”

What is unusual is the bear going right into the community, though, he said.

Clark doesn’t believe the bear travelled south because it was starving — the animal appears in good health, according to the images captured of it.

If anyone encounters a wild polar bear they should find a safe place like a car or building, and call the Polar Bear Alert line at 204-675-2327.