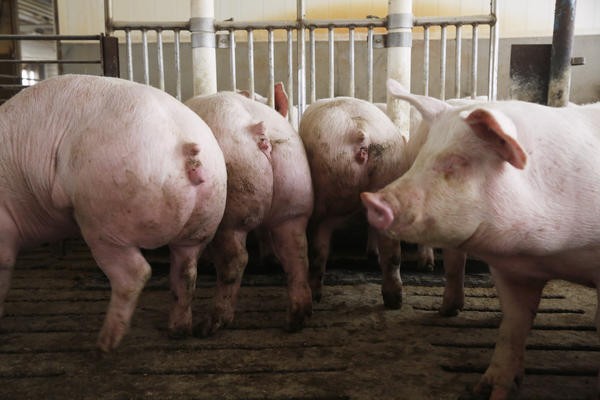 Despite the huge profitability of pig farming, many Nigerians are still overlooking this goldmine because of being ignorant on how it really works. While some don’t just get the fact that it is a money spinner, many who engage in it do it as a part time business. But if you can engage in this business fully, you will make millions.

It may come as a surprise to those of us in Nigeria that love pork meat; that pork has the highest consumption rate of all meat types worldwide.

About 36 per cent of meat eaten by humans annually is pork, followed by poultry (35 per cent), and cattle and goat (22 per cent). Lamb and mutton, come in at a distant four and six per cent respectively.

Many factors affect these trends. They include religious beliefs, environmental conditions, pricing and the growth of the human population.

Livestock producers continually strive to breed the ‘ultimate animal’ – one that grows faster and converts food to meat better, carries more meat in valuable areas of the carcass, and has a better temperament for ease of handling.

In many respects, pigs are ideal in this regard. They have fast growth rates and good feed-to-meat conversion ratios; are relatively easy to raise and do not require much space; have prolific breeding potential; and are docile.

These factors not only lead to increased profitability but also will surely assist in meeting the growing demand for meat in future. Pork consumption is likely to increase even more due to lower production costs.

Pigs, which belong to the Genus Sus, are very intelligent animals. There are 16 species, including warthogs and wild boars. Pigs interbreed quite easily and domesticated pigs will breed with wild pigs if allowed to.

Domesticated pigs vary according to breed, and some breeds have been line-bred to produce more lean meat than others have. There are hundreds of breeds of domesticated pigs, with about 25 being popular with commercial farmers.

It is possible to choose a specific breed or certain outcrosses to satisfy a particular market. For example, very fat pigs may not be useful for the production of belly or ‘streaky’ bacon, as the bacon will have more fat than meat.

Pigs are highly sociable, and communicate with one another via grunts of different pitch and duration. Pigs in the wild live in groups called ‘sounders,’ usually made up of one male with a number of sows.

Some sounders have been known to include 300 members. Males chased away by dominant boars often leave to form their own sounder in another location.

Pigs are remarkably clean and will often reserve an area in a sty solely for defecation.

Prolific breeders
Pigs usually breed twice a year, and produce about 12-20 piglets in a litter. These weigh about 1.1kg at birth and, unlike any other livestock, may double their weight in the first week of life if they obtain sufficient milk from the sow.

Piglets can be weaned at two to four weeks and can be slaughtered as ‘weaners’ at two to three months old. Other categories include ‘porkers’ (slaughtered at four months), ‘baconers’ (at eight months) and ‘sausage pigs,’ elderly animals that are culled.

In comparing pig growth rates and offspring numbers to those of cattle and sheep, it is easy to see why pig farming can accelerate profitability if undertaken properly in a humane, clean, and stress-free environment.

This is not only the correct thing to do. A lack of such farming practices can lead to great financial loss due to disease and stress-related problems.

Today’s domesticated pig has most of the qualities that the modern farmer looks for in livestock, including high profitability.

Investors should embrace piggery for quick returns and produce surplus food in Nigeria, to bring about the diversification of the Nigerian economy rather than expending billions of dollars annually in importation of frozen fish and meat.

Visit us for consultancy or attend Jovana Farms seminars nearest to you and discover how produce pigs! Can’t attend? Order for self-tutorial VCD & book. Visit: www.jovanafarms.com, e-mail:[email protected] or call: 080 33262 808, for more details. Choose also the nearest venue from our website.​