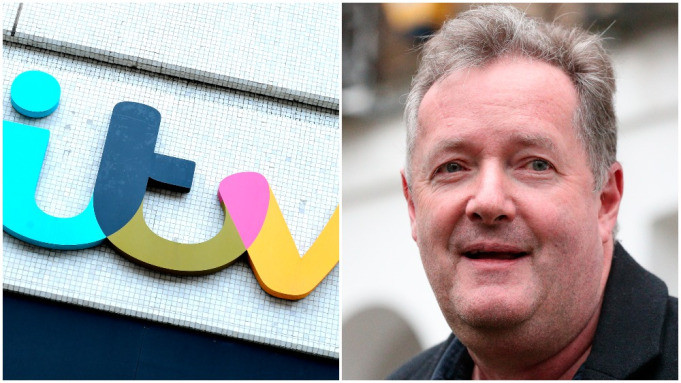 British media personality Piers Morgan has knocked ITV after the television station issued a statement saying that there are ‘no current plans to bring him back to Good Morning Britain after being cleared by Ofcom over his comments about Meghan Markle.

Morgan had quit GMB after being heavily criticized for his remarks about the Duchess of Sussex’s interview with Oprah Winfrey when he expressed doubt over her claim that she suffered suicidal thoughts.

It was reported at that time that the media personality ‘refused to apologize to Meghan on-air,’ with sources claiming his refusal to apologize was the reason for his abrupt exit.

In its 97-page ruling, UK media regulator Ofcom said that while Piers’ comments on Meghan did not breach the broadcasting code, the remarks were ‘potentially harmful and offensive.

“This interview became a major international news story and we acknowledged it was both legitimate and in the public interest for ITV to broadcast debates featuring presenters such as Mr Morgan scrutinising those allegations including the veracity, timing and possible motivations of the claims.

“Consistent with the right to freedom of expression, broadcasters can portray strong views on the matter, including views casting doubt on the claims made.

“Ofcom is clear that, consistent with freedom of expression, Mr Morgan was entitled to say he disbelieved the Duke and Duchess of Sussex’s allegations and to hold and express strong views that rigorously challenged their account.

“The Code allows for individuals to express strongly held and robustly argued views, including those that are potentially harmful or highly offensive, and for broadcasters to include these in their programming.

“The restriction of such views would, in our view, be an unwarranted and chilling restriction on freedom of expression both of the broadcaster and audience.

“This was a finely-balanced decision. Mr Morgan’s comments were potentially harmful and offensive to viewers, and we recognise the strong public reaction to them.

“But we also took full account of freedom of expression. Under our rules, broadcasters can include controversial opinions as part of legitimate debate in the public interest, and the strong challenge to Mr Morgan from other contributors provided important context for viewers.

“ITV might consider the use of timely warnings or signposting of support services to ensure viewers are properly protected.”

After Ofcom announced that he had been cleared, Morgan shared a tweet asking if he

Also Read SMS Marketing, How it can Increase Sales for Your Business

would get his job back. He wrote;

“I’m delighted Ofcom has endorsed my right to disbelieve the Duke & Duchess of Sussex’s incendiary claims to Oprah Winfrey, many of which have proven to be untrue.

“This is a resounding victory for free speech and a resounding defeat for Princess Pinocchio. Do I get my job back?”

Amid speculations that the watchdog’s ruling could result in Piers eventually going back to GMB, the broadcaster released a statement saying it accepted Piers’ decision to leave the program but will continue to work with him on Life Stories.

ITV also said that it welcomed the ruling from Ofcom that Piers’ remarks on GMB did not break broadcasting guidelines.

‘We welcome the Ofcom ruling that Good Morning Britain did not breach the broadcast standards relating to harm and offence.

‘The ruling sets out clearly that it was the balance and context the programme makers provided which was key in mitigating against the potential for harm and offence which could have been caused by Piers Morgan’s comments.’

ITV added that it was ‘because of the program’s editorial decisions and the opposing viewers which were forcefully expressed by other presenters and guests, that the program did not breach Ofcom’s rules.

Morgan, however, accused the broadcaster of giving a different interpretation to his clearance by Ofcom. He wrote; 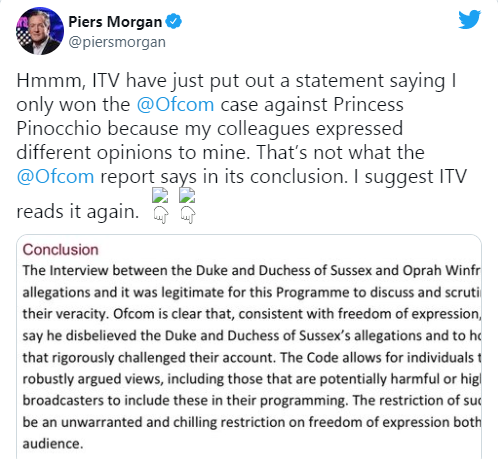 The media personality also dig at Meghan Markle while promoting himself as a nominee at this year’s National Television Awards.

‘I imagine the only thing that could irritate Princess Pinocchio more than me winning my [email protected] case against her would be me winning Presenter of the Year at this year’s National TV Awards…. So vote away!’