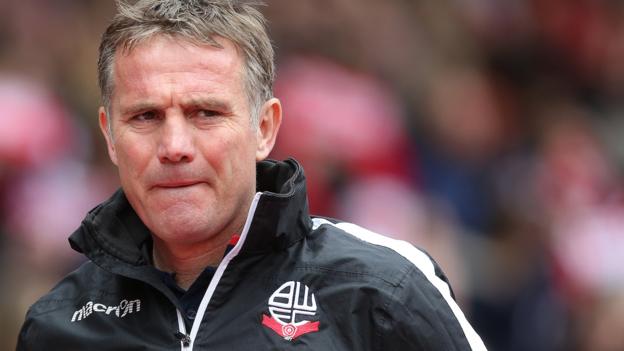 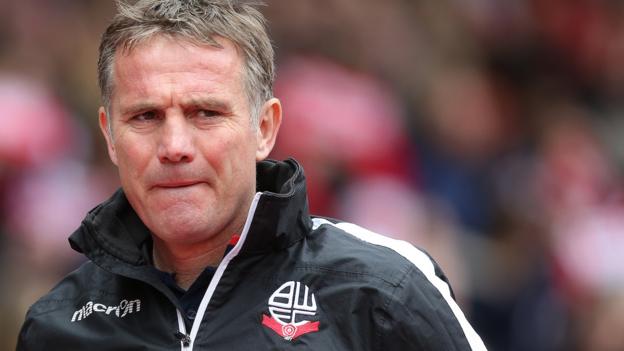 Bolton Wanderers manager Phil Parkinson and assistant Steve Parkin have resigned from their positions with the beleaguered League One club.

Wanderers have been in administration since May and said in a statement on Thursday they had accepted the resignations “with great reluctance”.

Tuesday’s fixture against Doncaster Rovers was postponed amid welfare concerns for younger players.

Academy boss Jimmy Phillips has been put in interim charge of the team.

“During what has been one of the most challenging periods in the club’s existence, both Phil and Steve conducted themselves with the utmost professionalism and dignity throughout,” said a club spokesperson.

“They leave the University of Bolton Stadium with their heads held high.”

Former Bradford City boss Parkinson’s final game in charge was Saturday’s 5-0 defeat by Tranmere Rovers, after which he claimed the club had contacted the English Football League over welfare concerns.

Wanderers have fielded teams largely made up of youth players so far this season, including their youngest-ever side in their draw against Coventry City.

After Parkinson and Parkin quit on Wednesday, Bolton said in a one-line statement: “The club has received the notice of resignation from Phil Parkinson and Steve Parkin and the matter is being considered.”

But 14 hours later the League One side confirmed the pair had left, with former Trotters defender Phillips taking first-team training.

Parkinson, 51, joined the club in the summer of 2016 – succeeding Neil Lennon – and oversaw promotion from League One in his first season.

Bolton stayed in the Championship on the final day in his second campaign, but were relegated last term amid financial struggles.

It was a season overshadowed by staff payment issues, postponed matches and players going on strike, before the club entered administration in May, leading to a 12-point deduction for 2019-20.

Over the summer, a protracted takeover by Football Ventures dragged out into the start of the current season, with the club having only seven senior players registered for the new campaign.

‘Hung out to dry’

In his final post-match interview following the defeat by Tranmere, Parkinson said the club’s staff and players had been “hung out to dry”.

On 8 August, the prospective takeover by Football Ventures was blocked by a court order issued by former Watford owner Laurence Bassini, who had tried to buy the club earlier this year before the deal fell through.

The sale appeared ready to go through, however, once that order was adjourned in court last week.

Speaking to BBC Radio Manchester, Parkinson said: “The combination of people not getting this deal to sell the club over the line and the tangled web which that is involved in, and making us play the game [against Tranmere], has hung all the staff and players out to dry.

“Honestly, it’s just unacceptable. This is Bolton Wanderers Football Club, a fantastic club with a great history, and we need a bit of help. If it’s not going to be sold, we need to be able to bring some players in.

“No new players in, no sign of the deal getting done, there’s signs of people out there wanting to buy the club but still no sign of it going over the line.”

The one constant for Bolton Wanderers throughout this chaos has been Phil Parkinson.

Despite strikes, late payment of wages and winding up orders, he’s kept a relatively cool head over his three-year spell at the club.

But in recent weeks, he has cut an increasingly frustrated figure on the sidelines. He has become more and more outspoken as a takeover of the club has dragged on.

His tactics were divisive, but you have to admit he was an excellent figurehead through this turbulent time for the club.