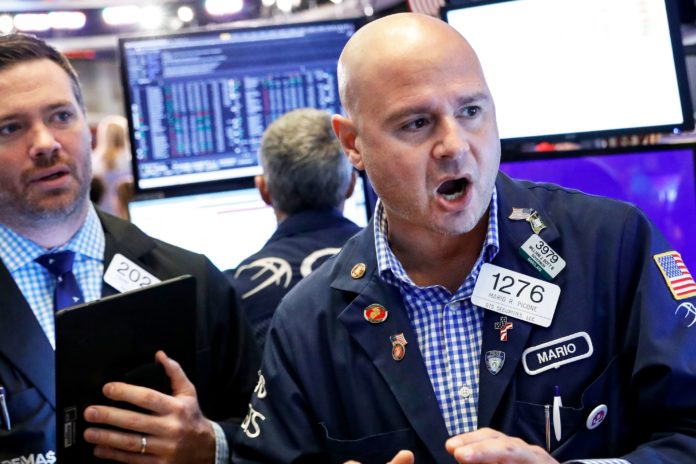 Traders work on the floor at the New York Stock Exchange.

With new risks from trade wars, stocks head into the final weeks of summer vulnerable to a pull back or even correction.

The market was down sharply in the past week, buffeted first by disappointment over the Fed’s more hawkish-than-expected policy outlook. Then they were beaten down by fears President Donald Trump is starting a new front in the trade wars with China that is unlikely to end any time soon.

“The real issue as to why there’s going to be a correction in our view is there’s a massive, massive vacuum here,” said Julian Emanuel, head of equity and derivative strategy at BTIG. “In essence, it’s a month and a half of a vacuum, if you think about the direction of the rhetoric. … The issues are China, the issues are the Fed and the issues are Brexit. In the first tow, you’re almost not going to hear anything.”

Trump, in threatening new tariffs on $300 billion in Chinese goods on Thursday, said the tariffs would go into effect on Sept. 1 unless China acts, but no new talks are expected before September. Economists said if the tariffs are put in place, the risks of a U.S. recession rise, particularly if businesses step back from investment, and possibly even hiring. But that could also prompt the Fed to cut interest rates to rescue the economy when it meets in September.

After a deluge of corporate headlines in the past several weeks, the earnings season is also winding down with just about 60 major companies reporting in the week ahead, and there are no really significant economic reports until the middle of the month.

Emanuel said the S&P 500 could see a decline to about 2,789, though he still expects to see 3,000 at the end of the year. Stocks started the past week near all-time highs, and the S&P 500 was was down more than 3% in the past week, but still up about 17% for the year-to-date. Odds are high that stocks pull back in August, since for the past eight years, the S&P 500 was negative during August in six of them.

Emanuel said if stocks decline too much or too long, he expects to see some action from the White House that will halt the selling.

“If you’re the president, there’s no way you’re going to allow an economic slowdown in an election year,” said Emanuel.

Barry Knapp, managing partner at Ironsides Macroeconomics, said Friday the escalation of the trade wars has made him more risk adverse, and he would lighten up holdings in the sectors he had favored—industrials, technology and transportation stocks.

“We could have a correction … then we’ll have to see how the policy makers respond to it,’ Knapp said. “The risks are significant. I think we’ll get a correction. … We could trade back to the May lows, somewhere around 2,750. then we’ll see how the administration responds. This was a seasonally vulnerable period.”

The Fed cut its target fed funds rate range Wednesday for the first time in a decade, but it does not have another meeting until Sept. 17, though Fed official hold their annual symposium in Jackson Hole at the end of August.

Fed Chairman Jerome Powell disappointed markets when he said the Fed was in a “midcycle adjustment,” not a longer term rate cutting cycle but by Friday, futures markets were indicating a nearly 100% chance the Fed will cut interest rates in September.

Emanuel said Brexit is also a risk for markets, as the U.K. gets closer to the Oct. 31 deadline to leave the European Union. “In all likelihood, if you hear something between now and then, it’s basically going to increase the perception that brinkmanship toward the Oct. 31 deadline becomes more a reality every day, and this is reflected in the fact the British sterling is collapsing,” he said. The market has been speculating that the odds of a hard Brexit are increasing, meaning Britain leaves the EU with no plan.

Currency markets were volatile in the past week, but the dollar index was basically flat by Friday afternoon. Traders were monitoring both the moves in the foreign exchange market and fixed income markets.

As for the bond market, the declines in yields in the past week were dramatic, with about a 30 basis point move in the 10-year yield in just two days. Treasury yields were bouncing along 2016 levels. The 10-year moved from about 2.07% ahead of the Fed news to less than 1.85% It was at 1.87% Friday afternoon.

Yields, which move opposite price, also had moved lower on the Trump trade threats.

“Now everybody is waiting for the next tweet. Unfortunately, there’s no economics calendar for when those come out,’ said Jon Hill, rate strategist at BMO.

Hill said the market will be watching ISM nonmanufacturing data Tuesday to see if the services side of the economy is still holding up. “It’s been a point of continued strength,” he said, noting at the same time manufacturing has been in decline.

Knapp said he is also worried that the dollar could strengthen on the trade war, and hurt emerging market currencies and U.S. profits. He noted that the Chinese currency weakened against the dollar overnight.

He said he is concerned currency volatility could “just start to have this big disruption that could be another factor that would just bleed into risk markets like the equity market.”