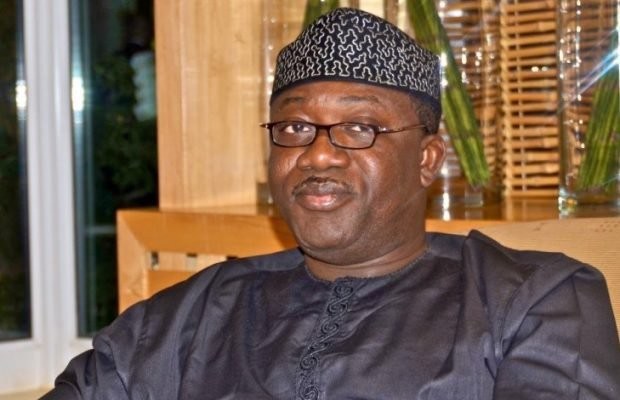 Socio-Economic Rights and Accountability Project, (SERAP) has urged Minister of Mines and Steel Development, Dr Kayode Fayemi, “to join us in promoting and supporting legislative measures to redirect public funds spent to provide life pensions to former governors for the benefit of the most marginalized and disadvantaged Nigerians.”

The group, in an open letter, asked the minister to tread the path rather than issuing threat of legal action “against us for exposing the existence of unfair and discriminatory life pensions states’ laws.”

The organization said, “Dr Fayemi’s dramatic accusation regarding the content of our letter to the Attorney General of the Federation and Minister of Justice Abubakar Malami SAN is unjustified, especially given that the law allowing pensions for governors in Ekiti was passed and/or facilitated and retained during his tenure as governor of the State. The Minister’s threat can only serve to undermine legitimate efforts to promote transparency, accountability and sustainable development in Nigeria.”

SERAP’s statement came after Dr Fayemi last week in a statement accused SERAP of embarrassing him by adding his name to the list of governors receiving double pay and life pensions while also receiving salaries and other emoluments as either senators or ministers. The Minister also gave SERAP 7 days to retract the statement or face legal action.

But SERAP in a statement on Sunday by its executive director Adetokunbo Mumuni said, “As a former pro-democracy activist, Dr Fayemi is well-known to us but we do not agree with the accusation that our letter targets the minister or intends to embarrass him in any way shape or form. Our objectives remain to promote the abolition of those obnoxious states’ laws, which seek to allow former governors to receive life pensions either now or in the future when friendly governments are in place in their states, and to secure full recovery of public funds.”

The letter read in part: “The problems of former governors receiving double pay and life pensions are real governance issues and deserve serious attention. These have to be put in the context of the allegation that state governors have over the years stolen in excess of N1 trillion including bailout funds meant for the payment of workers and pensioners in their states. By threatening legal action against SERAP on the matters, Dr Fayemi’s statement provides little more than unhelpful distraction.”

“Our aim is to let Nigerians know that such laws exist in several states, and to show how much state governments can do with our commonwealth if governors can focus on the right priorities—health, education, timely payment of ordinary workers’ salaries, and backlog of pensions for millions of pensioners struggling to enjoy the fruits of their labour—rather than on signing and passing laws that allow former governors to draw unfair pay and life pensions simply for serving for 4 or 8 years.”

“SERAP has no reason to apologise for doing our work, and will never back down from pursuing these matters, and will continue to work even harder to ensure that states’ laws allowing former governors to claim either presently or in the future life pensions are declared illegal and abolished.”

“The point is not just that several of the governors listed in our letter are receiving life pensions now but also that unless those states’ laws are declared illegal and nullified, other governors that may not be presently claiming life pensions will potentially be entitled to receive such pensions in the future when friendly governments are in place in their states.”

“These states’ laws allowing former governors to receive life pensions either now or in the future have a discriminatory purpose that involves an intent to discriminate against ordinary workers and pensioners. Such laws enhance the economic status of public officials and their families at the expense of the citizens that they are elected to serve, have no legitimacy at all, and cannot be justified either on legal or moral grounds.”

“SERAP is concerned that such laws have either the purpose or the effect of denying the citizens their right to the enjoyment of their commonwealth, and as such, prolonging the existing and entrenched poverty-gaps across the country. The implementation of these laws will continue to lock the citizens, especially the most marginalized and vulnerable groups, into lives of deprivation and hopelessness.”

“SERAP holds the firm view that there are clear casual and consequential links between implementation of unfair life pensions’ laws for former governors and violation of human dignity of citizens. Such laws deprive citizens of resources, capabilities, freedoms and choices necessary for the enjoyment of an adequate standard of living and sustainable livelihood.”

“The abolition of such laws therefore is a necessary first step towards delivering on the constitutional promise of equal protection and equal benefit of the law for a distressingly large number of Nigerians. Otherwise, public officials will remain seriously out of touch with a major source of poverty and discrimination in the country.”

It would be recalled that SERAP had last week in an open letter called on the Attorney-General of the Federation, Abubakar Malami (SAN) to within seven days challenge the legality of states’ laws allowing former governors to draw life pensions from their states.

The letter dated 14 July 2017 read in part: “Public interest is not well served when government officials such as former governors, deputies supplement their emoluments in their current positions with life pensions and emoluments drawn from their states’ meagre resources, and thereby prioritising their private or personal interests over and above the greatest happiness of the greatest number.”

“By signing such double emoluments and large benefits laws which they knew or ought to know that they would be beneficiaries, these former governors have abused their entrusted public functions and positions, and thereby obtained an undue advantage, contrary to article 19 of the UN Convention against Corruption.”