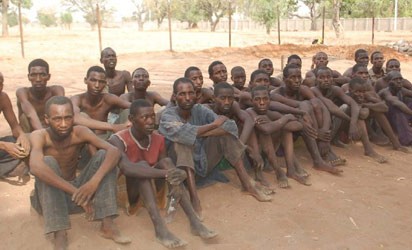 By Joseph ErunkeABUJA-FORTY three Boko Haram insurgents who recently surrendered to troops of Operation Lafiya Dole, were on Saturday, air lifted to join other surrendered insurgents in Gombe where they are to immediately commence de-radicalization and rehabilitation programme. 43 surrendered Boko Haram terrorists moved to de-radicalisation centre The programme, according to a statement by Colonel […]

Woman raped in churchyard by stranger

Italian man having coffee in a bar moments before killing his Nigerian wife, Amenze Rita

“You have been a worthy partner through the past 5 years” – Zahra Buhari praises her husband, Ahmed Indimi

#BBNaija: Jackie B and JayPaul evicted from Big Brother house