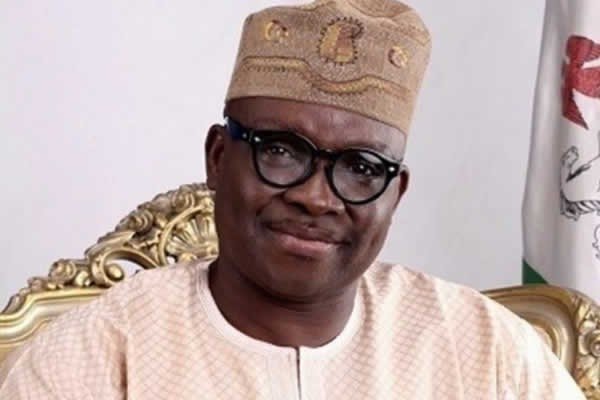 The People Democratic Party’s Governors Forum has backed the call by the 24-member Progressives Governors Forum for the urgent restructuring of the country to stop ongoing agitations in some parts of the nation.

The Chairman, PDP Governors Forum, who is also the Ekiti State Governor, Mr. Ayodele Fayose, in a telephone interview with our correspondent on Monday, said his colleagues, like the national leadership of the Ahmed Makarfi-led faction of the opposition party, were on the same page with the APC governors on the need to restructure the country.

This, he said, was because the present structure lacked the provisions that could enhance national integration, cohesion and prosperity needed to create an egalitarian society where social justice, fairness, equity and equality could thrive.

The APC governors had, last Thursday, called for reforms to Nigeria’s federal structure as a means of dousing growing ethnic-based tensions in the country.

The governors observed that the failure of leadership at all levels over the years and perhaps, the outcome of the 2015 general elections aggravated ethnic nationalism and extremist positions by Nigerians across the divide.

The statement partly read, “No separate Igbo, Yoruba, Hausa, Tiv or any individual ethnic group can fulfil the aspirations of its members or stand the test of time.

“Democratic governance offers Nigeria the a rare opportunity to reconfigure the Nigerian state to become a truly federal democracy that meets the aspirations of our citizens in which fiscal and political autonomy at sub-national level co-exist without tension with a strong national government capable of being a mirror for its constituent elements.”

Asked whether the PDP Governors Forum was in support of the call, Fayose said that had been the position of the opposition party and its governors.

He stated, “The APC governors have not just been saying it; Aregbesola said it; Ajimobi and a host of others in the APC have said it; and now, they have said it as a group and we support their call for restructuring. But the problem I have is that the Presidency is deaf to the voice of reason.

“The 2014 National Conference report is there and it contains recommendations made by Nigerians on how this country could be moved forward but the APC-led Federal Government is not interested in it and it has put the report on the shelf because everything about (ex-President Goodluck) Jonathan is bad.

“But if a government is always blaming yesterday for today’s failure and you are not showing us a promising future, then the APC government, as led by President (Muhammadu) Buhari, has failed.

“As far as we are concerned in the PDP Governors Forum and the party at large, this country must be restructured.”

Asked what kind of restructuring the PDP governors recommended, Fayose said if the Federal Government would not implement the 2014 confab report because of its “hatred for Jonathan,” it could as well organise another national conference where “Nigerians will sit together and agree on conditions for national integration, mutual understanding, cohesion, governance structure, peaceful coexistence and respect for one another.”

He added, “Even in marriage, you must first agree to live together before you can discuss how to handle your resources. The current agitation will not go away if you continue to suppress the people while a particular ethnic group is lording it over others. It’s not going to work.

“That is why they should listen to Nnamdi Kanu because he represents the thought of the new generations of the Igbo.”

Though Fayose commended the mature manner the acting President, Yemi Osinbajo, had been handling the ongoing agitation occasioned by the October 1 ultimatum some northern youths issued to the Igbo to leave the North, the governor noted that Osinbajo lacked the power to tackle the crisis.

“Osinbajo is a good man but he lacks power to perform because they do not give him the leverage because he has been made an overseer. That is why he has been reduced to or return to his pastoral work, ministering to people without actually taken concrete action to end the agitation. I pity him because he is in the midst of thorns,” he said.