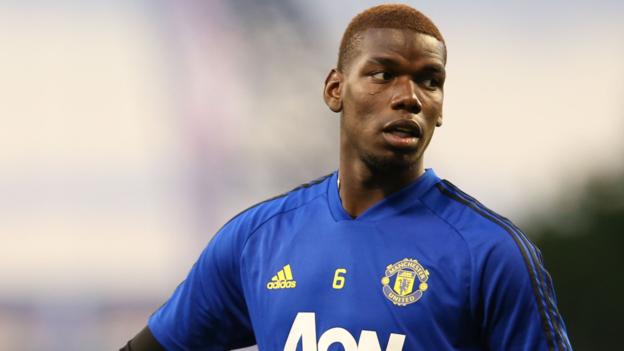 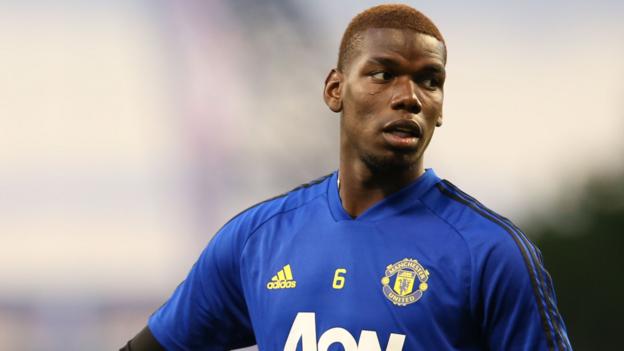 Manchester United boss Ole Gunnar Solskjaer says Paul Pogba has “never been a problem” and there is an “agenda” against the France midfielder.

Pogba’s agent Mino Raiola has said the 26-year-old wants to leave United and hopes “there will soon be a satisfying solution for all parties”.

Pogba, who is on the club’s pre-season tour, said in June that “now could be a good time to move elsewhere”.

Solskjaer says the club have not received a bid for any player.

In his first pre-season news conference in Perth, Australia, Solskjaer made reference to a video of £89m record-signing Pogba and team-mate Jesse Lingard that was reported as a bust-up between the pair.

“It’s an agenda against Paul, he’s a great, great professional, never been any problems, he has a heart of gold,” said the Norwegian.

“Jesse and Paul yesterday walking around was portrayed as a fight between the two boys and I know you’re here to sell papers and stories but they’re all professional.

“Paul’s never put himself out of the team, always given his best and I can’t report anything other than that agents talk all the time.

“I can’t be sitting here talking about Paul and what agents are saying, we’ve got a few years left of his contract and he’s been fantastic.”

Marcus Rashford also spoke at the news conference and addressed criticism of team-mate Lingard over a video the England midfielder posted on Instagram last month.

Lingard streamed a live video from a hotel while on holiday with Rashford in Miami.

Rashford, who signed a new a £200,000-a-week contract last week, said: “People need to understand he was enjoying his holiday, and it was a mistake.”

United have signed Wales winger Daniel James from Swansea and England Under-21 right-back Aaron Wan-Bissaka from Crystal Palace in a £50m deal.

While Ander Herrera, Antonio Valencia and James Wilson have left the club as free agents, there have been no outgoings for fees.

“As far as I am aware, we don’t have any bids for our players,” said Solskjaer.

“We’re Manchester United, we don’t have to sell and don’t have to overpay. You have to have the right players at the right price and if you look at the squad we’ve got now there are so many good players.”

United have made David de Gea an improved contract offer in a bid to keep the Spain goalkeeper at Old Trafford and Solskjaer said he was “positive” the club would “get it sorted”.

Solskjaer also expects Alexis Sanchez, who was injured in Chile’s Copa America defeat by Argentina, to be fit to train when he returns to the club in three weeks’ time.

Analysis – ‘In reality there is no agenda’

Solskjaer handled a very tricky opening press conference quite well at the Waca.

Given he is very much a disciple of Sir Alex Ferguson it should have come as no surprise the Manchester United manager swerved any criticism of Paul Pogba, even though it was the France midfielder who created the media storm around himself by saying publicly it was time for a new challenge.

Instead, he turned the focus on the media by saying there was an agenda against Pogba.

Again, this was a classic Ferguson diversion tactic. Solskjaer wants to build confidence with his squad and not criticising players in public – unlike Jose Mourinho, who did so regularly – is a way of doing that.

In reality there is no agenda. There may well have been no issue between Pogba and Jesse Lingard on their walk outside the team hotel on Monday, but a badly edited piece of social media made it appear there was.

If the clip hadn’t gone out on United’s official media, there would have been no story. The club must take responsibility for that.

Nevertheless, Solskjaer emerged from today’s experience having not made a delicate situation worse.

United’s new manager cannot control events around Pogba completely, but he can be satisfied with his public performance today.