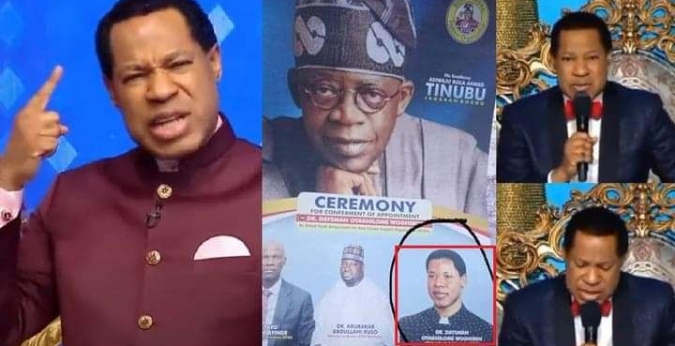 The founder of Christ Embassy, Pastor Chris Oyakhilome, has suspended his nephew, Daysman Oyakhilome Whoghiren, from all church activities over gross misconduct including his affiliation with the presidential candidate of the All Progressive Congress, Bola Ahmed Tinubu.

Pastor Chris announced this decision during a communion service on Sunday, August 7, and stated that his nephew has been removed from his official role as the President of Loveworld Next and Loveworld Innovations.

In a video making rounds online, he said,

He added that Pastor Daysman will be put under ‘spiritual rehabilitation’ with immediate effect.

This comes after Daysman was appointed as the global youth ambassador for the Bola Ahmed Tinubu support organization.

He is also being investigated by men of the Economic & Financial Crimes Commission, EFCC, for alleged fraudulent financial activities.

Meanwhile, some Christian youth communities have also called him out for accepting the political role despite being a role model to young Christians across the continent.