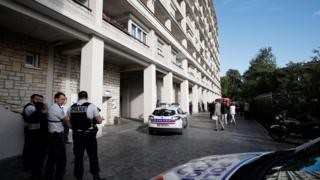 A car has struck a group of soldiers in Paris, injuring six, two seriously, police say.

An urgent police operation is now under way to find the vehicle – reportedly a BMW – and driver involved in the incident in the north-western suburb of Levallois-Perret.

The Paris prosecutor says the anti-terror unit is investigating what happened.

France has been under a state of emergency since November 2015.

On 13 November, 130 people were killed in a night of carnage in Paris, and more than 100 more have been killed in jihadist attacks since.

They include a string of assaults on the heavily armed security forces who now dot the streets of the capital – the last only four days ago.

While the hunt for the perpetrator continues, the Paris prosecutors’ office said its anti-terrorism unit was looking into “attempted killings… in relation to a terrorist undertaking”.

He said he had no doubt that the “disgusting” act was deliberate.

He said a vehicle had been waiting in the road for the soldiers to emerge as they came on duty.

“It was a BMW which accelerated very quickly the moment they came out.”

A resident in a nearby block of flats, Jean-Claude Veillant, told reporters he saw part of the attack.

“I heard a loud noise, the sound of scraping metal. Shortly after, I saw one of the badly wounded lying in front of the Vigipirate [army patrol] vehicle and another one behind it receiving treatment,” he said.

The injured soldiers are being treated at the Percy military hospital in Clamart, but their precise condition has not been made public.

Are you in the area? Did you witness the attack in Paris? Send your experiences and images to haveyoursay@bbc.co.uk.