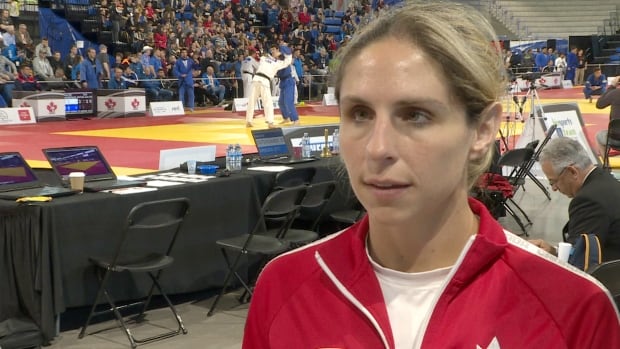 Para judo athlete and strong medal contender Priscilla Gagné has been selected to lead Canadian athletes into the opening ceremony of the Tokyo Paralympic Games on Tuesday.

Ranked No. 2 in the world in women’s 52 kilograms, Gagné says she’s “overjoyed” to be the country’s flag-bearer.

“It is incredibly honouring and humbling. It’s exciting, it’s many feelings in one,” Gagné told CBC Sports. “It’s nostalgic, it’s such a gift, not something taken lightly.

“It’s very, very meaningful and something I always dreamed of was to go to the Olympics and Paralympics. But to be honoured with being flag-bearer is something I never imagined and it’s just beyond anything I could ask for.”

She’ll be supported in flag-bearing by training partner Laurie Wiltshire.

The 35-year-old judoka — originally from Sarnia, Ont., now based in Montreal — is competing in her second Paralympic Games.

“For me, it represents unity within diversity, it represents strength and resilience, and it represents a hope for something greater than what we have,” Gagné said. “I really hope that for kids living with disabilities, this inspires them to never stop dreaming, to never listen to somebody who tells them no and to stand together with people who believe in them.”

She’s hoping to upgrade her near-podium finish from Rio 2016 and capture a medal. Canada has a history of four bronze Paralympic medals in the sport.

“I had really great competitions after Rio. Just narrowly missing the bronze really motivated me to continue the journey and to really work on strategy and taught me to just never give up because even at the last second, things could change.”

Gagné is no stranger to the podium. Most recently, she captured gold at the 2020 Pan American Para Championships for a second time, after first clinching the top spot in 2018, and earned bronze at the German Open.

She also won silver at the 2019 Lima and 2015 Toronto Parapan American Games. Gagné is the first Canadian woman to win a medal in the sport at a world championships, claiming bronze in 2018.

The Canadian made her Paralympic debut in Rio 2016, placing fifth after a tight bronze-medal match-up in the 52-kilogram judo event against Sevinch Salaeva of Uzbekistan.

Salaeva will return to competition in Tokyo, as will world No.1 Inna Sych of Ukraine, who has a 57-kilogram Paralympic gold under her belt.

France’s Sandrine Martinet — the reigning 52-kilogram gold medallist — will compete in the 48-kilogram event instead.

Athletes with a visual impairment compete in the martial art, which has been included at the Paralympics since Seoul 1988. Women’s Para judo events have been included as of Athens 2004.

The competition in Tokyo will be starkly different from Gagné’s experience in Brazil, where packed stadiums held thunderous crowds. Fans have been banned from the Games due to the COVID-19 pandemic and rising case counts in Tokyo.

The Games marks the Canadian’s first competition in nearly two years. She also comes into competition after recovering from hip surgery in 2020 and contending with training challenges due to the pandemic, which limited her opportunities to spar with opponents.

“Fighting on an injury for three years, and then being able to go through surgery, taking advantage of the bad situation — I had time to recover now, so I went ahead and scheduled my surgery right away,” Gagné said. “I was blessed to get in really quick and made a full recovery pretty quickly, too.”

Gagné’s perseverance and tenacity have drawn the praise of many within the Canadian Paralympic team.

“The biggest congratulations to Priscilla on being named Canada’s flag-bearer for the opening ceremony!” said Stephanie Dixon, Canada’s chef de mission for the Tokyo Paralympics.

“Priscilla’s passion and excellence on and off the mat is immeasurable, and this honour is well deserved. She will be an incredible ambassador for Canada at the Games, and I know our entire team will be proud to have her lead the way at the opening ceremony.”

Gagné will take to the mats at Nippon Budokan on Aug. 27.