Pandemic-era elopements, micro-weddings could be here to stay as couples find less is more 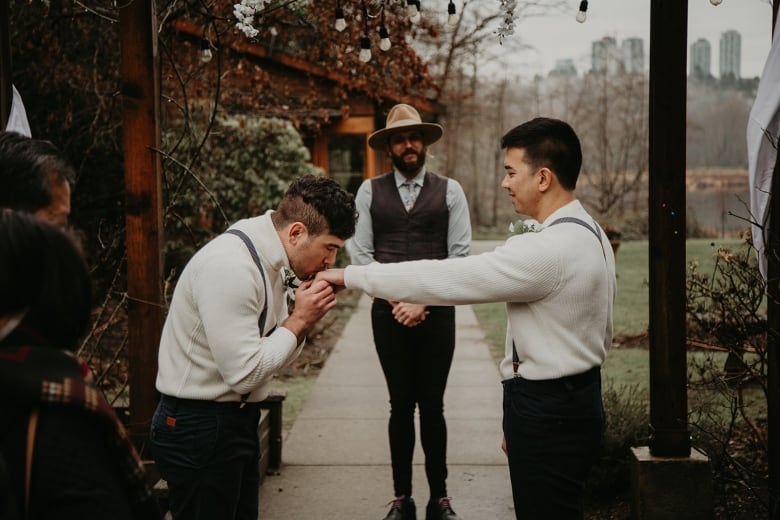 When Katey Mac thinks back to her large-scale wedding two years ago, she says one of her biggest regrets was not eloping.

Unaware of a growing industry catering to smaller, more creative alternatives to the pomp and ceremony of large traditional events, Mac and her husband-to-be went ahead and invited 150 guests.

The experience was a turning point that prompted the Abbotsford, B.C., photographer to start her own business arranging small, adventure elopements.

“If somebody would have told me that I could drive dirt bikes to the top of a mountain and have the ceremony on this cliff overlooking the most beautiful areas of B.C. I would have been all over that,” she said.

Elopements used to mean last-minute and often secretive ceremonies where friends and family weren’t invited. And while that still holds true, the term has shifted to include unique, small-scale gatherings where the couple has gladly handed over control — and the bulk of the stress to someone else to organize.

“You don’t have to worry about how it happens, it just happens,” said Mac, who has arranged “I do’s” everywhere from provincial parks to the top of a glacier in Whistler.

The pandemic, of course, effectively ruled out large gatherings, and many couples were faced with downsizing, delaying or cancelling their celebrations.

“I’m not talking one couple, I’m talking multiple couples that jumped on this opportunity.”

Miller says couples are scaling back and truly enjoying their day when they aren’t stretched too thin trying to ensure their guests are having a good time.

“Weddings can sometimes feel like a production. When you are spending hundreds of thousands of dollars there’s a different vibe that comes with that, than when it’s just two people and their best  friends,” he said.

A growing number of hotels and inns are offering all-inclusive elopement packages where the happy couple can pack up their troubles and let the venue handle the myriad stressors lurking in the details of wedding planning.

Tofino’s Long Beach Lodge offers elopement packages designed just for two — where everything from photographers, officiants, food, flowers and even witnesses are provided.

The resort can barely keep up with the current demand, with packages almost 100 per cent booked through October.

Sam McCullough, the resort’s marketing manager, says couples want to spend the money on themselves rather than on hundreds of guests.

“You can have a wedding weekend rather than just one night of fun,” she said.

Even former Vancouver mayor Gregor Robertson and his bride Eileen Park opted for a small, secret ceremony which was featured in Vogue Magazine.

“Our wedding felt charmed and just right — reflective of us and these very unique times,” Park told the magazine.

Larger ceremonies will no doubt return in the coming months, but those that organize and execute small-scale, more personalized weddings say the trend is here to stay.