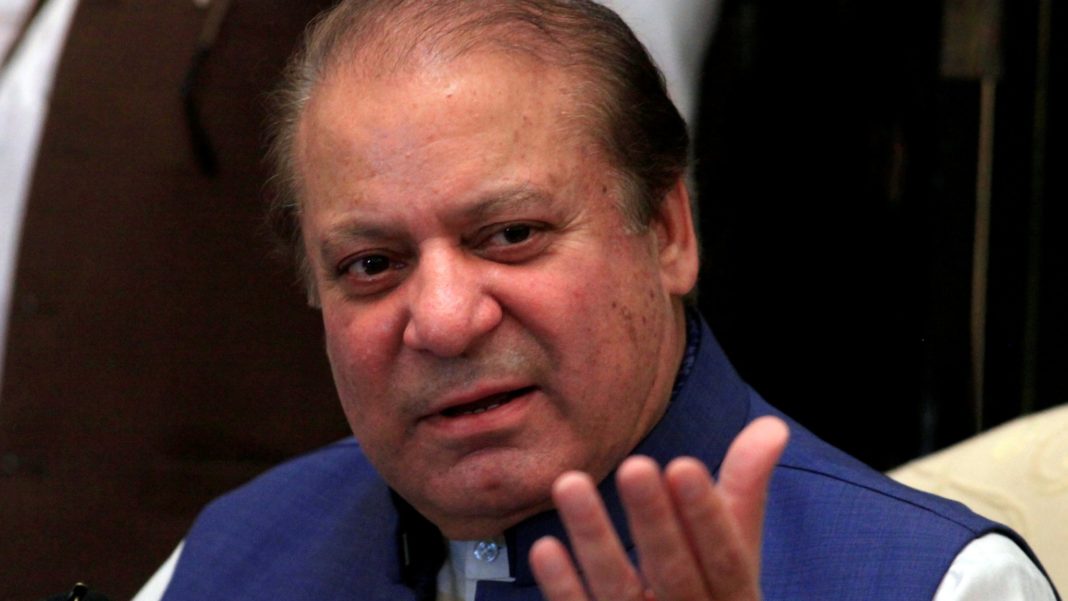 The National Accountability Bureau (NAB) court handed down the verdict after a series of delays.

His daughter and son-in-law were also convicted.

Sharif, who is currently in London and was sentenced in absentia, says the charges are politically motivated and has vowed to return to Pakistan.

“I will go back. I will continue my struggle even in the jail,” he told reporters.

Sharif gave no date for his return. His wife, Kulsoom Nawaz, is receiving treatment in London for cancer.

Sharif’s lawyer Abdul Rashid Sheikh, speaking in Pakistan, confirmed that they would appeal against the conviction.

Judge Mohammad Bashir ordered Sharif to serve 10 years for owning assets beyond income and one year for not co-operating with the NAB. The sentences are to be served concurrently.

The case, known as the Avenfield Reference, relates to a number of properties in the UK capital.

The Panama Papers leak in 2015 revealed several of Sharif’s children had links to offshore companies, which were allegedly used to channel funds and buy foreign assets – including luxury flats in Avenfield House, on London’s Park Lane.

His family, however, insist they legitimately acquired the four properties.

As part of the ruling, the court ordered they be confiscated for the federal government.

Members of the Pakistani media set up outside the Avenfield House properties, where the family reportedly watched the verdict:

The UK has no formal extradition treaty with Pakistan, but Section 194 of the Extradition Act 2003 allows special extradition arrangements in exceptional circumstances.

Fearing unrest, the Pakistani authorities reportedly closed roads around the Federal Judicial Complex in Islamabad and imposed a ban on public assemblies or rallies in the area.

The court repeatedly delayed the decision, initially pushing the ruling back after Friday prayers and then several times again, sparking speculation about the wait.

However, the judge reportedly said part of the delay was because of the need to photocopy the judgement – which is more than 100 pages long – for both the defence and the prosecution.

On Twitter, the hashtag #AvenfieldReference became one of the highest worldwide trends as Pakistanis awaited the verdict.

Pakistan holds a general election on 25 July. Sharif is disqualified from standing for his centre-right party, the PML-N.

His brother Shahbaz Sharif now heads the PML-N, and is running in the election.

All eyes on Sharif’s next move

The ruling comes just a couple of weeks ahead of national elections and is seen by many as the culmination of a process that first saw Sharif disqualified by the Supreme Court last year on questionable grounds.

The PML-N party has blamed the military for this process, saying it was conspiring to annihilate it for its criticism of the military’s links with militant groups and its policy to improve ties with India.

With elections approaching, the party is likely to use Sharif’s conviction as proof of this “conspiracy” with an aim to preserve its substantial but increasingly jittery bloc of voters.

Much will depend on Sharif’s next move. If he decides to return to the country he will certainly be jailed, but it may also animate his party’s election campaign and earn a sympathy vote.

Shahbaz Sharif defended his brother at a press conference following the verdict, calling it “politically motivated” and saying the election in July would serve as a people’s court that would condemn the decision.

At the time, he was less than a year away from becoming the first head of government in Pakistani history to complete a full term in office.