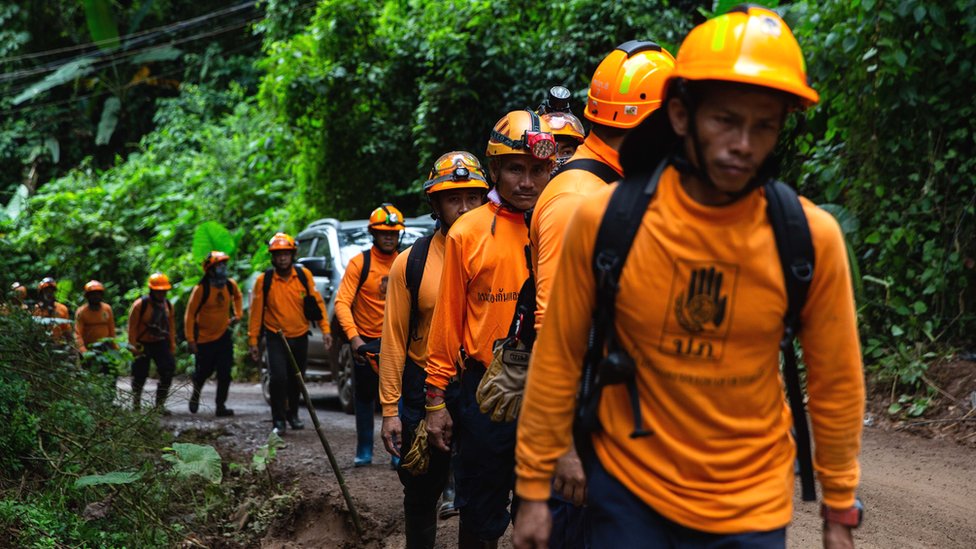 When asked if a rescue attempt would be made overnight if it started to rain, he said: “No, the boys can’t dive at this time.”

An air line has been installed to the cave where the group has been trapped for nearly two weeks in a chamber in the Tham Luang cave complex.

On Thursday, their parents sent letters in for the boys to read – but the governor said he was not sure if these had reached them yet.

The group had ventured in while the cave was dry but rain then flooded it.

Speaking to reporters on Friday, the governor of the Chiang Rai region, where the cave is situated, said the boys had enough strength to walk but could not swim to safety.

Twelve boys and their football coach trapped in waterlogged caves in Thailand will not be rescued overnight as they can not dive, an official says.

Earlier, a former Thai navy diver died on his way out of the caves after delivering air tanks to those trapped.

Rescuers have dug more than 100 holes, hoping to reach the cave by a direct route. There were 18 promising ones, the deepest at 400m, but Mr Narongsak said he was not sure if it would reach the boys, who are believed to be about 600m below the surface.

Narongsak Osotthanakorn said the health of most of the boys had “improved to normal”, and that divers were continuing to teach diving and breathing techniques.

So what is the situation?

The group was found in the cave by British rescue divers 10 days after they went missing. They were perched on a rock shelf in a small chamber about 4km (2.5 miles) from the cave mouth.

Teams of Thai and international divers have since supplied them with food, oxygen and medical attention, but there are mounting concerns about the oxygen level in the chamber, which officials said had fallen to 15%. The usual level is 21%.

Mr Narongsak said discussions regarding the lowest risk rescue attempts were ongoing, but acknowledged that time was against them.

He added that the rains had stopped in the past few days, giving the rescue operation some space to make several areas in the cave dry enough for rescue workers to access.

He also said that when teams had stopped pumping water for 12 minutes during the day on Friday, the water level in the cave rose by 10cm (4in).

On the surface, a huge military and civilian rescue operation is racing against the clock to bring the boys to safety. Heavy monsoon rains are expected on Sunday, threatening further flooding.

Officials had initially considered leaving the boys in the chamber to wait out the rainy season – which could have seen them trapped there for up to four months.

What happened to the diver?

Saman Gunan – a highly trained diver – lost consciousness on his way out of the cave complex on Thursday.

His death underscored the danger of moving from the chamber to mouth of the cave, and raised serious doubts about the safety of bringing the boys out through the cramped, flooded passageways.

The diver died in one of the passageways, said Passakorn Boonyaluck, deputy governor of the Chiang Rai region.

“His job was to deliver oxygen. He did not have enough on his way back,” Mr Passakorn said.

He said that Saman’s dive partner had tried to revive him but was unable to.

Saman, who was reportedly 38, had left the navy but returned to aid in the rescue operation. Said to be an avid runner and cyclist, he was part of the massive rescue operation launched after the group became stranded in the Tham Luang cave.