Pacquiao: ‘We are still here and not done in boxing’ 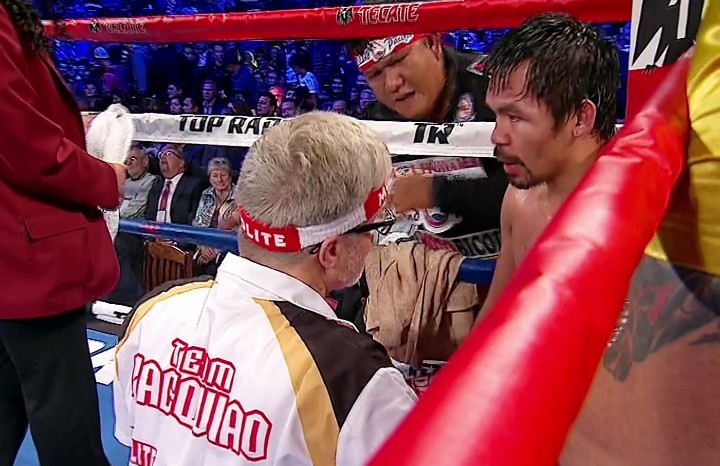 Manny Pacquiao has made hundreds of millions of dollars, in large part because of the huge money his numerous pay-per-view fights have generated.

Make no mistake: Pacquiao still likes making tons of money, much of which he has used through the years to generously support numerous charitable causes in his home country of the Philippines. And with the Queensland government in Australia bankrolling his welterweight world title defense against Jeff Horn — the main event of the “Battle of Brisbane” on Saturday (9 p.m. ET, ESPN and ESPN Deportes) at Suncorp Stadium in Horn’s hometown — Pacquiao is in line for another multimillion-dollar payday.

But unlike the 22 fights Pacquiao has had since a sixth-round knockout of Hector Velazquez on HBO in September 2005, the fight with Horn will not be a pay-per-view in the United States — and Pacquiao said he is OK with that.

Of course, it’s no secret that, other than the record-shattering megafight with Floyd Mayweather Jr. in 2015, Pacquiao’s pay-per-view numbers have been on the decline. Top Rank promoter Bob Arum went on his own for Pacquiao’s resounding decision win against Jessie Vargas in November, a fight in which Pacquiao reclaimed the title he lost to Mayweather, and said the fight barely did 250,000 buys, if that.

Even though Pacquiao is not the pay-per-view attraction he once was, when his fights regularly topped 1 million buys, he views the opportunity to fight on ESPN as a way to let the boxing public know that, even at age 38 and on the backside of his career, he is still here, still really good and still ready to please the crowd.

“Yes, this is a great opportunity to show the fans of boxing that we are still here and not done in boxing,” Pacquiao said this week about fighting on basic cable. “So this is a good chance and we believe that a lot of people will be watching, and we spoke to Bob and we decided to give the people a chance to watch the fight on a free station in America.

“Bob and I decided to show this fight on free television so people can watch without paying the pay-per-view [fee] for the fight, because I have fought in America many times and people had to pay to watch the fight on television. For this fight, we are giving the people the chance to watch it for free. This is a very exciting fight because it is the first time I am fighting in this country.”

Granted, Horn (16-0-1, 11 KOs), a 29-year-old former schoolteacher, is completely unknown in the United States, but the fight will be a huge event in Brisbane, where a crowd of around 55,000 to 60,000 is expected to cheer on its favorite son. The fight is on pay-per-view in Australia. Pacquiao said he had no problem going to fight Horn in his hometown.

Manny Pacquiao is the favorite, but Jeff Horn, far left will be fighting at home in front of 60,000 fans. Dave Hunt/EPA

“I am a person that loves to fight against my opponent with focus and determination, and I will not notice that the people will be cheering for him, so that is good for me,” Pacquiao said. “So I don’t think that the people rooting for Jeff Horn, with my experience in boxing, [is bad for me]. … When I fought Marco Antonio Barrera in San Antonio, Texas, in 2003, I had only five fans for me. All that does is give me more inspiration and focus.”

Freddie Roach, Pacquiao’s Hall of Fame trainer, added, “Manny is a performer. He loves people, loves a big audience. Brisbane has all that for this fight. He’ll be fighting in front of the biggest crowd of his career.”

Horn might be a big underdog, but he is a former Olympian, is undefeated, has a crowd-pleasing style and has certainly come off as confident in the buildup to the fight.

“I have just been putting everything into it, training very hard, and I think all of that is going to pay off for me,” said Horn, who is Pacquiao’s mandatory challenger. “Manny Pacquiao is going to be surprised about what I take to him in the ring.”

“To me, not being known as a fighter — that might be handy in this fight, as in Manny has not been able to study what I can do and maybe underestimate me in this fight,” Horn added. “And in the same way, Pacquiao has fought so many tough guys that we all know and have watched, so he has definitely got the experience on me. But will he use that experience? We will see.”

Said Glenn Rushton, Horn’s trainer: “Jeff is a fierce competitor. He is very determined, especially with his big heart. He hates losing at anything, whether it is poker or table tennis or whatever it is. He is one of those people that just has to win, and I think that has been a real motivating factor. We know we are fighting one of the greatest fighters of all time, and we are very mindful and respect Manny Pacquiao’s abilities.”

Welterweight titleholder Manny Pacquiao is happy to be fighting in Australia for the first time. Dan Peled/EPA

Many would prefer to see Pacquiao (59-6-2, 38 KOs) take on a more highly regarded opponent, such as unified titlist Keith Thurman (though he is out for the rest of the year with an injury) or titleholder Errol Spence Jr. or even former titleholder Danny Garcia. Those are hard bouts to make because of the fighters’ alliance with Arum rival Al Haymon, not to mention the huge purses both sides would demand for fights that are not guaranteed commercial hits.

Pacquiao, boxing’s only eight-division world champion, brushed aside the question about why he would fight such an unknown opponent with a thin résumé.

“It is good to fight in a country that you haven’t fought in before and to give a chance to Jeff,” Pacquiao said. “He is undefeated, and it is good to give him a chance.

“Jeff Horn is OK. I’ve watched video of his fights. He brings a lot of action into the ring. I know what he is feeling. I remember everything about my first world title fight.”

There is a strong chance — should Pacquiao win, and perhaps win another fight in the fall in the Philippines, and should Terence Crawford defeat Julius Indongo on Aug. 19 to unify all four junior welterweight titles — that, come next spring, Crawford will move up to welterweight and finally get the crack at Pacquiao he has wanted. It’s a fight Arum said he hopes to make.

So as that fight marinates, Arum made the deal for Pacquiao to fight Horn in Australia, forgoing U.S. pay-per-view, and even an offer from HBO to televise it on the network, to go with ESPN.

“Manny is a level above the ordinary fighter. He is now in the Senate in the Philippines,” Arum said. “He thinks in terms of the people, and he did say to me, ‘I want this fight seen in America, which has been so good to me, by as many people as possible, for free.’ We were able to make a deal with ESPN, and we will have, by far, the most people to ever watch a Manny Pacquiao fight. …

“So in effect I think it should be viewed as a gift to the American public, by Manny Pacquiao, who has spent so much time and so much effort and has done great things in the United States. I think it’s wonderful that this fight is being shown on free television and, yes, I hope that many more fights will be shown on free-to-air television.”