Our garbage is threatening polar bears — but there are solutions, new report says 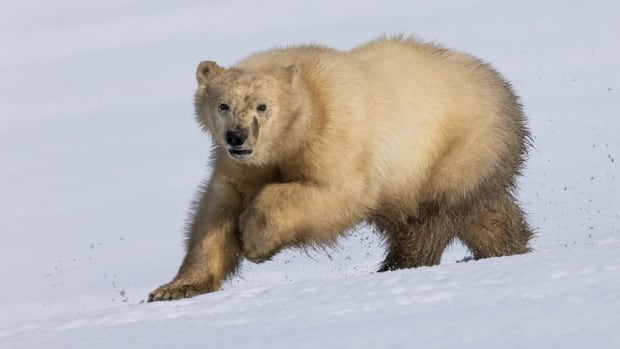 A new research paper suggests food waste from humans is posing an increasing threat to already struggling polar bear populations — but there are solutions to the problem.

The report, published Wednesday in Oryx, the International Journal of Conservation, looks at six case studies that illustrate how negative, food-related interactions between humans and polar bears can become either chronic or unpredictable.

Among them is the northern Manitoba community of Churchill, which closed its dump, secured waste in a bear-proof facility and focused on public education on the issue.

One is the increased conflict between polar bears and humans, he said, resulting in the bears being killed. The second danger is that bears are eating unhealthy foods, said York, a senior director of conservation at Polar Bears International.

“For populations that are already under stress, this just adds one more stressor to the load. Especially on that disease, toxics and plastics side.”

Churchill is an example that presents possible solutions — but “the problem with all that is that it’s all very expensive,” York said.

The report suggests the problem is also being exacerbated by climate change, as the loss of sea ice forces polar bears onto land more often.

That loss of ice has stressed polar bears for years, with some researchers raising concerns about possible extinction.

“At some point they’re going to get hungry and they’re going to look for food. And if they can smell something that smells like food to them, they don’t know that it might well have other things that are negative for their health,” York said.

Growing human populations and increased human visitation also increase the likelihood of conflict between people and bears, the report says.

But giving northern communities the resources, education and tools they need to deal with polar bear problems can help address the issue, York said.

Stephen Petersen, director of conservation and research at Winnipeg’s Assiniboine Park Zoo, said the report is a valuable step to defining the problem and putting forward potential solutions.

“I think that often problems or issues kind of go … maybe noticed locally, but maybe not noticed [on] the larger scale until we get a paper or report like this coming out that pulls it all together and really focuses people on what the solutions might be,” he said.

Petersen, who has worked in Churchill, said the solutions seen there can be transferred to other areas dealing with the same problem.

The report outlines case studies of communities in Nunavut, Russia and Alaska, as well as coastal First Nations in Ontario. Some of those regions saw negative effects of having bears around that were conditioned to eat garbage, the report says.

“One of the things that we’re seeing overall is kind of history repeating itself to a certain extent,” Petersen said.

“I think one of the big lessons is that … if you want to look to the successes of Churchill in Canada or in other places, there needs to be some funding and some support for those northern communities.”

“Collecting that information is going to give the pieces that let each community kind of tailor a management plan for their community,” he said.

In Churchill, Petersen said after the dump was removed and the food source was gone, most of the remaining problem bears were younger adults and family groups.

Having that information helped pave the way for a proactive plan to reduce the risk for people after the dump was closed, he said.

“Knowing that cycle for each community is going to be important to developing the way forward,” he said.

The report also recommends communities test methods for keeping food from polar bears, assess how effective different deterrent and relocation efforts are and develop ways to predict when polar bears could seek food waste from humans.