Oops! Jeffrey Dean Morgan Just Let It Slip That Hilarie Burton Is Pregnant With a Girl 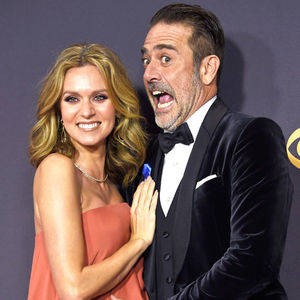 Someone just let the cat out of the bag and that someone is definitely Jeffrey Dean Morgan.

The Walking Dead actor, who is notoriously private, had quite the slip-up of secret information when he accidentally informed an entire crowd of people at the Supernatural convention in New Jersey earlier today that he and his lady love Hilarie Burton were expecting a baby girl.

After his gaff today, the star, who shares a 7-year-old son named Gus with his partner, threw in the towel and just fessed up ASAP. Right after the slip of the tongue, the deep-voiced star took to his Instagram to out himself—before the rest of the world could.

The not-so-smooth former Grey’s Anatomy star (RIP Denny) had a good attitude when he shared a fan photo showing the exact moment when he realized he’d messed up.

The 51-year-old wrote, “Whoever took this picture?? Caught a moment… thank you. We shall cherish…. I texted @hilarieburton right after I spilled the little girl beans…and, as usual…she was a rockstar. After all these years she’s come to expect me to be a dope… thank god she gets it, and loves me regardless.”

Last week at the 2017 Emmys, Morgan basically outed/hard-core hinted at the fact that the quiet couple was having baby No. 2. The clearly excited actor couldn’t help but put his hands on his longtime love’s barely there baby bump while on the red carpet, which essentially let the world know there was a bun in the former One Tree Hill star’s oven.

The lovebirds may not be a red carpet staple, but the under-the-radar twosome have been together since 2009, shortly after The CW star split from assistant director Ian Prange. They secretly welcomed their son in March 2010.

Congratulations to the expanding family!