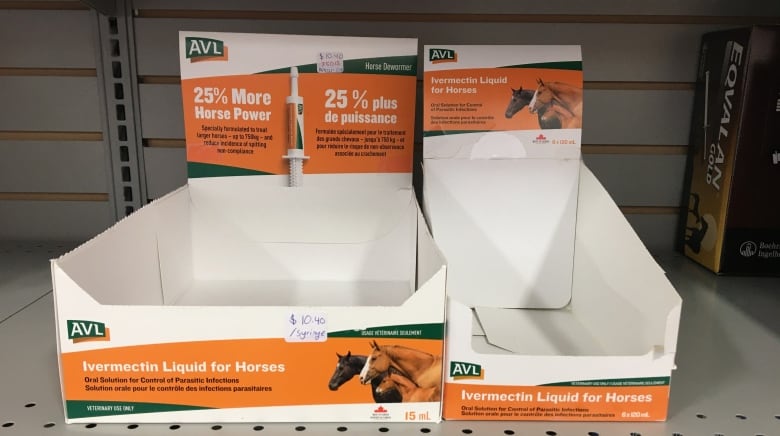 A veterinary supply store in Thorndale, Ont. is warning the public against the use of ivermectin to prevent or treat COVID-19 as tubes of the horse wormer are being bought in higher amounts than usual.

The Nobel Prize-winning medicine is intended to treat parasites, such as intestinal worms or lice, in both animals and humans. Quantities of ivermectin have been limited in Canada since January, but veterinary vendors in Saskatchewan, Alberta and P.E.I have since reported a rise in inquiries from people looking to buy it.

“I’ve been in business for 45 years,” said Doug Wilson, owner and operator of Wilson’s Tack and Vet Supplies. “And I’ve never seen anything like this.”

Over the past two weeks, Wilson noticed an increase of new visitors seeking out the drug in his store, which he sells for the purposes of horse worming.

After realizing many of the customers were not “horse people,” he now requires proof of being a registered horse owner to purchase ivermectin.

He said that ivermectin functions as a light poison that helps to shed worms from a horse’s system.

“It’ll make a thousand-pound horse feel sick,” he said, “so I don’t know what it’s going to do to a hundred and eighty-pound person. I’m basically scared for them, and the reason being that they just don’t know what they’re doing.”

At the end of August, the Government of Canada issued an advisory against taking veterinary ivermectin to treat COVID-19.

The veterinary version has a higher concentration than that made for humans. Human consumption can lead to health problems such as vomiting, diarrhea, low blood pressure, allergic reactions, seizures, coma and even death.

“We work with the biggest, strongest, fastest athlete in the world, the race horse. And even that thousand pound animal, you give them the wormer and it can affect them; it’s pretty powerful stuff,” said Mark Williams, president of the Lakeshore Horse Racing Association in Leamington, Ont.

“There’s really no scientific proof that it would have any effect on a virus.”

Only three approved treatments for COVID-19

At Windsor Regional Hospital, chief of staff Dr. Wassim Saad said he was aware that fabricated results from an out-of-print study involving ivermectin have been circulating through social media.

Health Canada and the Ontario Science Table have currently approved only three therapies for COVID-19: Remdesivir, tocilizumab and dexamethasone. There is no known cure for COVID-19, and there is no treatment for it that can be purchased in a store.

He said that the readily-available vaccine is the public’s best chance at getting out of the pandemic.

“If you think you can ride out this pandemic by not getting vaccinated and hoping that everybody else around you gets vaccinated, think again,” he said.

“You absolutely need it. It’s safe, and if we get enough people vaccinated, we can stop the transmission and prevent the hospitals from being overwhelmed with cases.”