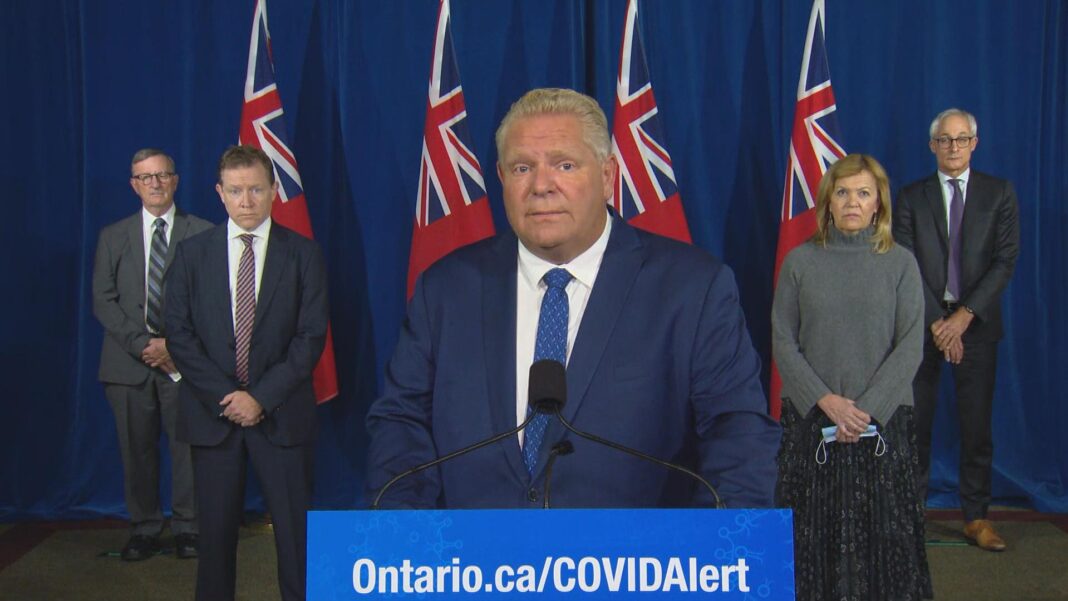 Ontario announced tighter COVID-19 restrictions Friday amid mounting criticism that the government was ill-prepared for a second wave of the pandemic, which has seen crippling lines at assessment centres, a ballooning testing backlog, and a surge in new cases.

Some of the new public health measures were introduced provincewide, and some were more targeted to current hot spots, such as Toronto, Ottawa and Peel, as the province reported a record-high number of new COVID-19 cases Friday.

But public health officials in Toronto — the hardest-hit city in Ontario — said the measures did not go far enough in dealing with a provincial caseload that could reach 1,000 new daily infections by mid-October, according to the latest modelling.

The provincial government is also making significant changes to the process of getting a COVID-19 test, which will be done by appointment only as of Oct. 6. Assessment centres will stop offering walk-in tests as of Oct. 4 in an effort to allow Ontario’s network of labs to work through a backlog of tests that ballooned to more than 90,500 Friday.

As part of today’s changes, Ontario is putting the concept of social circles on pause and advising people to limit close contact only to those living in their own household and maintain two metres of distance from everyone else. People who live alone may consider having close contact with another household.

“Just keep your circles tight,” Premier Doug Ford said at an afternoon news conference, during which multiple reporters expressed confusion about the details of the province’s updated advice.

For example, Ford and his top health officials struggled to answer when asked if someone should visit their parent who lives in a different house on Thanksgiving later this month.

Meanwhile, masks will now be required in all work places where physical distancing of two metres or more is not possible, as well as on all public transit and in shopping centres provincewide.

Any additional business reopenings in Ontario will be put on hold for at least 28 more days, Ford said.

CBC News previously reported on a proposal before Ford’s cabinet that would have designated Toronto, Ottawa and Peel as “red zones.”

Ford confirmed he had been looking at that proposal but that he decided against doing so after speaking with Quebec Premier François Legault, who said the system, which is in place in Quebec, was not effective.

“He told me it was very, very confusing to the public,” Ford said. “You’re constantly changing the colours … Ottawa, Toronto and Peel, they’re the hot spots.”

Instead, in these three regions, the province has opted to:

Until now, gyms and fitness studios could operate with up to 50 people per room. Restaurants and bars did not have a set limit on the number of patrons they could host but had to be set-up so different tables were either two metres apart or separated by Plexiglas or some other barrier.

Though focused primarily on Ottawa, Toronto and Peel Region, Ontario Premier Doug Ford unveiled new public health measures for the province to stop the spread of the coronavirus. 3:57

In a letter to the government, De Villa said it must introduce stricter measures to slow the spread of the novel coronavirus in the city.

“These are tough recommendations, but I believe they are necessary in order to protect seniors in our long-term care homes and students in our schools,” said Toronto Mayor John Tory in a statement.

Toronto saw the most, though Health Minister Christine Elliott noted that some cases confirmed in the spring were included in today’s number due to a data review by Toronto Public Health.

Other public health units that saw double-digit increases include:

About 58 per cent of the newly confirmed infections are in people under 40 years old, Elliott noted, including 30 in students.

The previous record of 700 new cases came just five days ago on September 28.

The province’s official COVID-19 death toll took a considerable jump, increasing by 76 to 2,927. However 74 of those deaths were “reported for cases that occurred in the spring or summer and are now being recorded as part of a data review and data cleaning initiative,” the Ministry of Health said.

Ontario’s network of labs processed 40,093 test samples for the novel coronavirus yesterday, while the backlog of tests waiting to be completed grew to 90,513 — by far the most since the outbreak in late January.

The province says it hopes to build capacity for up to 50,000 tests daily by mid-October and 68,000 per day by mid-November.

The number of patients in Ontario hospitals with confirmed cases of COVID-19 continued its slow but steady climb, increasing by seven up to 167. Thirty-eight of those people are being treated in intensive care units, and 21 are on ventilators.

The number of confirmed outbreaks in long-term care homes is now at 44.

The Registered Nurses Association of Ontario (RNAO) called on the provincial government Friday to immediately impose stricter public health measures to reduce the spread of COVID-19.

“Urgent action is needed to prevent a full lockdown later on. This is something we have implored government officials to do, but their actions are timid and ineffective,” said RNAO CEO Dr. Doris Grinspun in a statement posted online.

She said that “the numbers will get much higher unless immediate action is taken to stem the rising tide.”

The statement urges the closure of bars, indoor dining, places of worship and gyms across the province.

NDP Leader Andrea Horwath said the government is putting Ontario at risk with “half measures and contradictory rules.”
“Doug Ford is lurching from crisis to crisis,” she said in a statement.

“He’s applying superficial Band-Aids to deep gashes. He never had a plan to stop the second wave from getting out of control, and so it has.”

“The premier should listen to health experts in Ontario’s COVID-19 hotspots and take steps now that will save lives in the long run and prevent another full lockdown,” he said in a statement.

Still have questions about COVID-19? These CBC News stories will help.

Will Ontario be able to track down everyone who came in contact with those who have COVID-19?

Is another lockdown coming in Ontario? What do we know about the Ford government’s fall plan?

The province just changed its rules around runny noses, and you see what schools have COVID-19 outbreaks on this provincial site

What’s the most recent guidance on mask use?

Who is getting COVID-19?