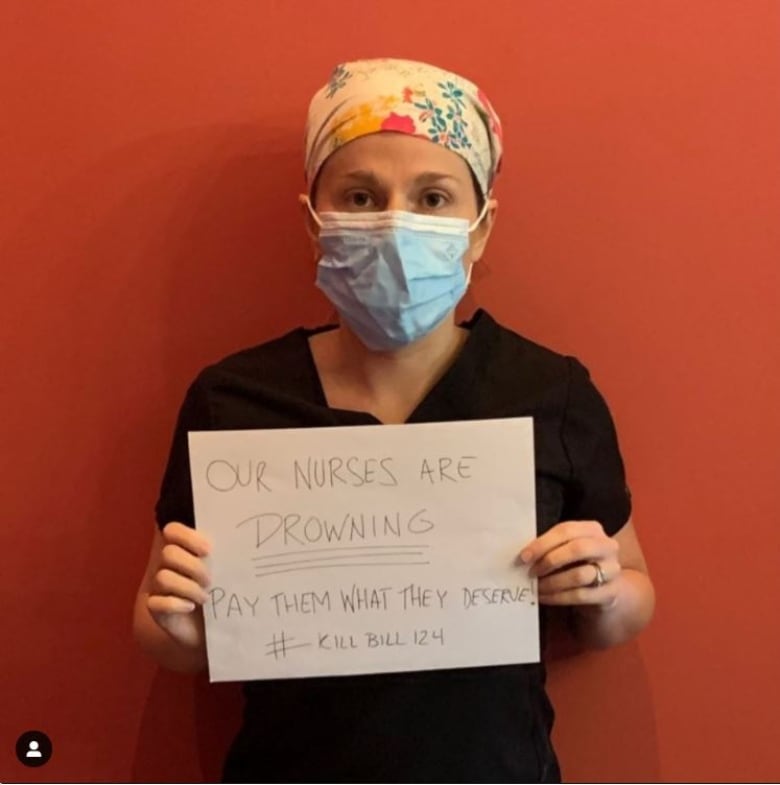 Critical care nurses in southern Ontario have reached a breaking point after they say more than a year and a half of brutal pandemic work and stagnant pay has led to a staffing shortage so severe they believe it’s putting patients in danger.

And as the fourth wave begins, with the number of COVID-19 cases in Ontario hitting 639 on Monday, they say they don’t know how they or their hospitals will cope.

CBC News agreed to give four nurses anonymity so they could talk freely about the conditions at their hospitals. All of them said they’d face severe retribution from management for speaking out without permission.

“I have no doubt I’d be fired,” said a Toronto nurse who’s worked in the emergency department for more than 20 years.

But she said she can’t stay silent any longer.

“The anxiety that I feel before having to go back to work because I don’t know what I’m going to see or how many people I’m going to have to take care of because we’re short staffed … I am sometimes terrified,” she said.

She is behind the Instagram account @nursewithsign416, which shares images of nurses, their families and other health professionals holding signs describing the importance of experienced nurses and how burned out they are, along with the hashtag #RNsilentnomore.

Many of the posts are demanding Premier Doug Ford’s government repeal Bill 124, 2019 legislation that capped annual salary increases for many public sector employees, including nurses, at an average of one per cent annually for three years.

The Ministry of Health said it has recently announced $61 million in funding to train, recruit and hire thousands of registered and practical nurses. The province also provided nurses with a four-month pandemic pay salary top-up in 2020 and is working to provide mental health support for front-line health-care workers.

“Our government is incredibly grateful for the contributions of Ontario’s health care workers and the critical role they have played throughout the COVID-19 pandemic, providing patients with timely, safe and equitable access to high quality care,” said ministry spokesperson David Jensen.

Jensen said it’s “inaccurate” to suggest Bill 124, which applies to nurses, teachers and many other public sector employees, caps wage increases at one per cent a year as they can still get raises for seniority and performance.

The nursing shortage is absolutely brutal … and the impact on patients and their families and health-care providers is very real.– Dr. Raghu Venugopal, Toronto emergency physician

The Toronto nurse said that while she’s at the top of the pay scale, her one per cent raise has translated to 47 cents an hour, even though she’s doing the most dangerous and stressful work of her career.

She said she’s watched other first responders, including local police and most recently the RCMP, get significantly higher raises, and questioned why her colleagues aren’t getting the same.

“You can’t call us heroes on the one hand and then pay us back for it with 47 cents,” she said.

This year alone, she said dozens of nurses have left her emergency department because they’re burned  out, underpaid and ignored by hospitals and the province.

Dr. Raghu Venugopal, a Toronto emergency physician, said he’s seen three nurses care for up to 25 patients at a time. On a recent shift, he witnessed a man have a seizure without any privacy while other patients, including a small child, watched in shock.

“The nursing shortage is absolutely brutal,” he said. “I can’t emphasize enough how serious the situation is in acute health care right now. And the impact on patients and their families and health-care providers is very real.”

Dr. Christopher Keefer, another Toronto emergency physician, said there’s a sense of despair and frustration among his colleagues.

“We’ve lost so many great nurses because they just can’t take it anymore,” Keefer said. “I see nurses crying at work all the time. To see these incredibly strong people be broken, it’s very hard.”

The Ontario Hospital Association spokesperson Hannah Ward said it’s been working closely with hospitals, colleges and universities to understand the pandemic’s impact on health-care staff and to rebuild the workforce.

“Dedicated and highly skilled health care workers continue to go above and beyond the call of duty under these extraordinary circumstances,” Ward said. “And hospitals are grateful to them as they do everything in their power to protect and care for Ontarians.”

Another nurse, who works in a Hamilton hospital, said her intensive care unit has lost a third of its full-time nurses. On several occasions, she said she’s worked when the department is short 10 nurses or more — about half the staff needed. Some have been replaced with recent graduates who, she said, aren’t equipped to work in critical care.

“It feels very heavy when you’re getting ready to go in,” she said. “We sleep awful the night before our first shift because there’s this impending dread of what am I going back into tomorrow.”

The two other nurses who work at different hospitals described similar situations in their units, with dozens of experienced colleagues having left in the past six months. One of the nurses is now on leave because of the stress she said she experienced during the first and second waves of the pandemic.

Hospitals currently face a 10 to 12 per cent vacancy rate for nursing positions, estimated Ontario Nurses’ Association President Vicki McKenna. And while recent nursing graduates are being hired in droves, the province is not doing enough to retain experienced nurses who are essential to critical care units.

“They feel disposable, disrespected and not acknowledged,” she said.

The union has called for the province to change Bill 124 so nurses can be paid at least the cost of inflation, but has only been met with silence, said McKenna.

Working within the confines of Bill 124, Toronto’s University Health Network, where none of the nurses in this story work, is finding other ways to retain nurses as many near retirement age, said Terri Stuart-McEwan, executive director of surgical services and a registered nurse.

“Can we provide them with educational initiatives? Can we give them great schedules? Can we treat them with respect? All of those things,” she said. “For our staff, recognition and empowerment seems way more important sometimes than just money in the bank.”