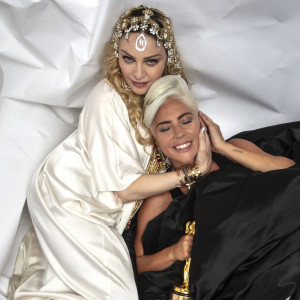 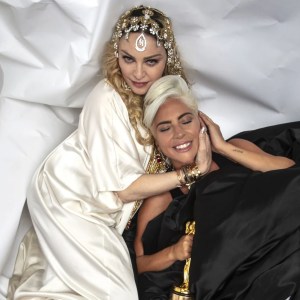 Lady Gaga poses for TIME with Madonna.JR for TIME

Looks like Lady Gaga is back “Into the Groove” with Madonna. The two pop stars, who have feuded off and on over the past decade, embraced at a 2019 Oscars afterparty on Sunday, February 24, after Gaga, 32, won the Best Original Song award.

The new Oscar winner was a guest of honor at The Party, the annual post-Oscars celebration that Madonna, 60, cohosts with manager Guy Oseary. Gaga not only scored an invitation to the bash but even got a hug from the “Rebel Heart” singer, as one TIME portrait reveals.

Madonna’s feud with the A Star Is Born actress reportedly started in 2011, when music fans accused Gaga of copying Madonna’s 1989 track “Express Yourself” in her 2011 single “Born This Way.” The following year, Madge weighed in on the alleged ripoff, telling ABC News that Gaga’s hit “feels reductive.”

The “Shallow” singer responded to the diss in her 2017 Netflix documentary, Gaga: Five Foot Two. “She wouldn’t look me in the eye and tell me that I was reductive,” she said of Madonna. “Telling me you think I’m a piece of s—t through the media? It’s like a guy passing me a note through his friend.”

Still, Gaga expressed respect for her pop predecessor. “I admired her always, and I still admire her no matter what she might think of me,” she said in the film.

The nine-time Grammy winner also expressed conflicting thoughts about Madonna in 2016. “Madonna and I are very different,” she said on Beats 1 Radio that October. “Just saying. We’re very different. I wouldn’t make that comparison at all, and I don’t mean to disrespect Madonna. She’s a nice lady, and she’s had a fantastic huge career. Biggest pop star of all time. But I play a lot of instruments. I write all my own music. I spend hours and hours a day in the studio. I’m a producer. I’m a writer. What I do is different.”

Every Time Lady Gaga and Bradley Cooper Were Costar Goals

Gaga was singing a different tune not even two months later, however, after Madonna gave a powerful speech at the Billboard Women in Music event in December 2016. “@Madonna your speech at the Billboard Music Awards was inspiring,” she tweeted at the time. “You’re so brave & strong. Thanks for being that for us girls we need that.”