Nigerian-American guard Victor Oladipo had 23 points and five assists to help the Indiana Pacers clinch a playoffs berth with a 113-107 overtime victory over the Miami Heat on Sunday.

Thaddeus Young had 22 points, nine rebounds and five steals, and Bojan Bogdanovic added 18 points and eight rebounds for the Pacers, who secured their seventh appearance in the postseason for the last eight seasons.

Tyler Johnson made five 3-pointers and finished with 19 points, James Johnson had 15 points and nine rebounds, and Bam Adebayo added 14 for the Heat, who split the four-game season series.

Darren Collison finished with 12 points, made the go-ahead 3-pointer to put the Pacers ahead 101-100 with 2:49 remaining in overtime, and Indiana scored 11 straight points to pull away. The Pacers took a 109-102 lead with Collison’s 3-pointer with 55 seconds left to play.

Miami coach Eric Spoelstra missed the first game of his career, leaving Indianapolis on Saturday after learning his wife Nikki was entering labor. Assistant coach Dan Craig filled in and Spoelstra is expected to return for Miami’s home game against Cleveland on Tuesday.

Indiana trailed by 14 in the first half and went on a 9-1 run late in the second quarter to take a 50-46 lead on Oladipo’s jumper with 2:22 remaining in the half.

The Heat then scored seven straight, including a dunk and two free-throws by Adebayo. And James Johnson’s free-throw gave with under a second left gave Miami a 52-52 halftime lead.

The Heat came back from an eight-point deficit in the second half. Johnson forced overtime with a free-throw with 8.3 seconds left in regulation.

Heat: Maimi had 10 turnovers in the first half and finished with 17 overall … Tyler Johnson had 12 points in the first quarter alone … Adebayo also notched five rebounds.

Pacers: Indiana shot 66.7 percent in the overtime period and 48.9 percent overall … Forward Domantas Sabonis was out for a sixth straight game with a sprained left ankle.

ROZIER SHINES AS CELTICS DOWN KINGS 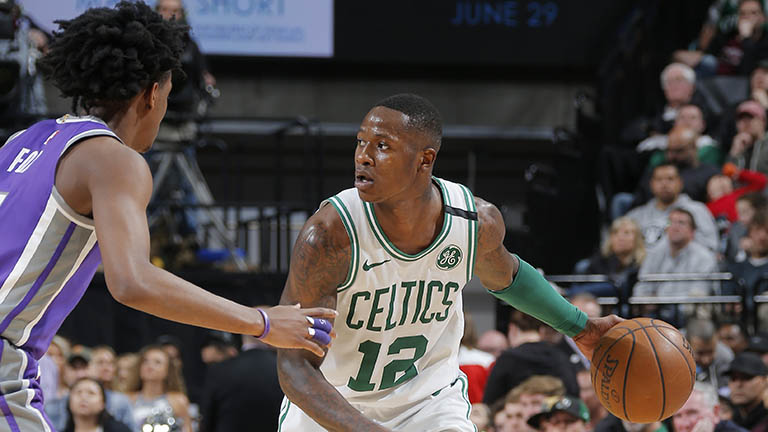 Terry Rozier scored a season-high 33 points and nearly matched the Celtics’ franchise record for 3-pointers, Jaylen Brown made consecutive buckets to break open a close game in the fourth quarter, and Boston held on to beat the Sacramento Kings 104-93 on Sunday.

Making his sixth start in place of injured All-Star point guard Kyrie Irving, Rozier shot 12-of-16, including 8-of-12 on threes, in his most impressive game of the season. Rozier, who had been averaging 16.2 points in Irving’s absence, also had five rebounds and three assists.

The eight threes were one shy of the Celtics’ single-game record of nine shared by Isaiah Thomas and Antoine Walker. One of Rozier’s missed threes came on a rushed attempt with the shot clock winding down early in the fourth.

Brown had 19 points in his return after missing two weeks with a concussion. Al Horford scored 14 while Jayson Tatum added 12 points and seven rebounds to help Boston win in Sacramento for the first time since February 1, 2011.

Boston, who began the day 4.5 games behind Toronto for the top spot in the East, won for the fourth time in five games.

Buddy Hield scored 24 points for Sacramento, and Willie Cauley-Stein and Skal Labissiere had 14 apiece. The Kings had won five straight home games against the Celtics and entered the fourth quarter down 80-78 before being held to 13 points in the final frame.

Three days after protesters formed a human chain blocking entrances to Golden1 Center and prevented all but about 1,500 fans from entering, things were back to normal in and outside the arena. Metal barricades were extended further out than usual to form a bigger perimeter, but that was the only indication that anything had happened.

Celtics: Brown went to the bench with three fouls in the opening seven minutes of the first quarter.

Kings: Zach Randolph did not play for the second consecutive game. Garrett Temple was also held out and missed his second straight since spraining his left ankle in practice Thursday.