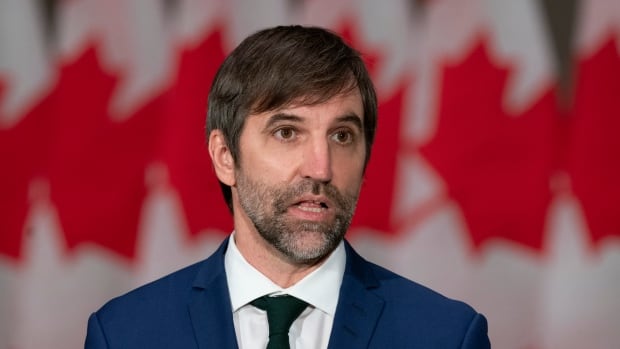 “[We] recognize that some of the measures that will be needed to achieve those deep emission reductions might require more time than what we have between now and 2030,” Steven Guilbeault said in an interview with CBC Radio’s The House.

The federal government’s climate plan to reach net-zero emissions by 2050 has an interim goal to cut emissions across all sectors 40 to 45 per cent below 2005 levels by 2030.

That would require a 42 per cent cut in oil and gas emissions, a pace that has caused concern in that sector.

“There’s a possibility that if the industry needs a bit more time, then we can provide some flexibility while ensuring that Canada still meets its 2030 goals, that we can allow the industry a bit more time if they need this time to deploy the necessary infrastructure that they need to reduce emissions,” Guilbeault said.

The minister did not say how Canada could still meet its target on time if the industry — which accounted for 26 per cent of national emissions in 2019 — was behind schedule.

Pathways Alliance, a group that includes six companies representing 95 per cent of Canada’s oilsands production, says it is working to reduce its CO2 emissions by 22 megatonnes by 2030. Ottawa’s plan wants the sector’s total emissions (about 191 megatonnes in 2019) reduced to 110 megatonnes by the end of the decade.

“By 2032 you might get another two or three megatonnes,” Mark Cameron, vice-president of external relations with the Pathways Alliance, told CBC News.

“We’re just glad that the government acknowledges that this is not going to be something that we’re going to be able to achieve … Getting beyond that will take more time or new technology or additional funding or some combination of all three.”

This week the federal government also released a discussion paper floating two possibilities to fulfil its platform pledge of putting a cap on oil and gas production emissions.

It proposes a cap-and-trade system or a modified carbon pricing system to set that ceiling — carefully drawing a line between a cap on emissions and a cap on production. Some industry and political critics have highlighted that limiting one could indirectly lead to the other.

Guilbeault said the discussion paper also outlines the potential need for flexibility on methods and deadlines.

“I agree that there are different views out there. Not everyone agrees with that. But at the same time, I think Canadians see the need to reduce carbon pollution. They see the impacts of climate change,” the minister said.

Cameron added that the 22-megatonne-by-2030 goal could potentially be increased if new technology becomes available or significantly more funding is infused. Either way, hitting the reductions outlined in the federal government’s 2030 plan isn’t feasible under current circumstances, he said.

“We would obviously need more time to get to that level. Whether or not we can achieve that by 2032, or it may take longer than that, is another question.”