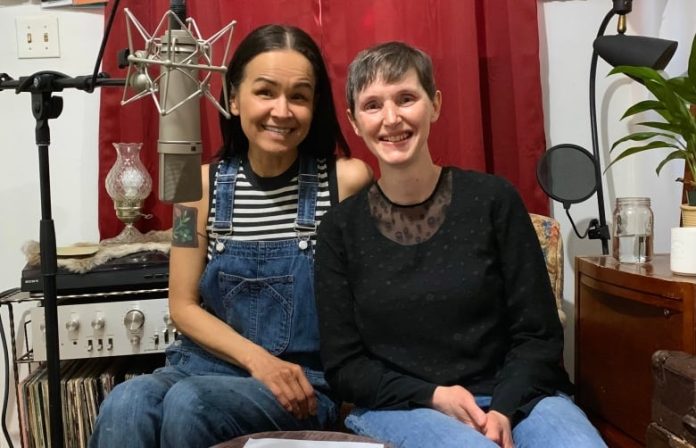 Friends, colleagues and others who knew Jody Porter have shared memories and messages of love, gratitude and admiration for the longtime CBC reporter.

Messages remembering Porter touch on her life, friendship, and commitment to telling hard, necessary truths about residential schools and colonialism in Canada, and their ongoing impacts on Indigenous people in northern Ontario.

Michelle Derosier, an Anishinaabe filmmaker and Porter’s close friend, said she was drawn to her not just because of the stories she told through her journalism, but how she held and shared those stories.

“She became a safe place in the community early on for me as a community member, as an Indigenous woman,” Derosier said.

“As a storyteller myself, I would often go to her in the early days of our relationship with stories, whether they were something that was going to become part of a story, or whether there was just a story I wanted her to hold. She would do that, and she would do that with such grace, and integrity and love.”

Raised in southern Ontario, Porter graduated from Centennial College with a diploma in journalism. She spent a brief period as a journalist in the Northwest Territories before moving to Sioux Lookout, Ont., in 1998.

In Sioux Lookout, she was the editor for the Wawatay Native Communications Society, an independent, self-governing media organization dedicated to telling stories from the 49 First Nations that make up the Nishnawbe Aski Nation in northern Ontario.

Garnet Angeconeb, an Anishinaabe elder and former journalist, was the interim executive director at the time. Angeconeb remembers hiring Porter for the position “within a few hours, maybe even minutes” after her interview.

In a 2020 essay she wrote for the Maisonneuve magazine, Porter said it was during that time she began visiting First Nations in the region and “got the education I was so sorely lacking.”

“I began to cover stories from those communities: about homes with no drinking water, overcrowded houses full of illness, and mould and grief. About reserves with no proper schools. About the residential schools, the last of which had only recently closed,” she wrote in her essay.

It was a time when Wawatay News was facing many challenges just trying to stay afloat, but Porter’s work helped turn things around for the better, Angeconeb said.

“She was a gifted storyteller. She was a professional journalist in every way: tough, determined, wholehearted, honest and sincere. She believed in what she was doing,” Angeconeb said in an email to CBC News.

Porter moved to Thunder Bay in 2000 to continue that work for CBC.

“She had a remarkable ability as a seer,” said Derosier, adding that she told stories forcing Canadians to confront their own history and oppression of Indigenous people at a time when others either weren’t looking or were afraid to do so.

“As a settler and as a white woman in our communities, she wasn’t afraid of that. She stepped into that with courage, long before anyone else was really doing that. I know myself and many others have deep gratitude, and respect and love for her for going to those places.”

Throughout her career, Porter won numerous awards and recognitions for her work about Indigenous issues and social justice in northern Ontario.

In 2011, she won the Radio Television Digital News Association’s (RTDNA) Adrienne Clarkson Award for diversity for her “Common Ground Café” series that brought strangers together to make a meal and discuss race relations in Thunder Bay. It was one of her many RTDNA honours.

In 2013, the Anishinabek Nation awarded Porter with the Debwewin Citation, one of the few non-Indigenous journalists to receive the honour for excellence in reporting on First Nations issues. The same year, she was awarded a prestigious fellowship at Massey College.

Her reporting has also been cited by the Truth and Reconciliation Commission of Canada, and two reports — the Office of the Independent Police Review Director’s Broken Trust report and Murray Sinclair’s report into the Thunder Bay Police Service Board — that found and documented detailed evidence of systemic racism within the Thunder Bay police force and oversight board.

A statement from Nishnawbe Aski Nation (NAN) Grand Chief Derek Fox added, “Her exemplary reporting was highlighted during the 2015 inquest into the death of seven NAN youth, which was followed Canada-wide. She presented complex and painful issues with truth, accuracy and compassion. Her unflinching work presented the tragic circumstances around these deaths and illuminated the challenges faced by First Nations youth while pursuing their education.”

Michael D’Souza worked closely with Porter as a national assignment editor with CBC before his retirement in 2016. They also became close friends.

“Her sources were impeccable,” D’Souza said. “Jody had a way of making people talk to her, like she was open and listened to them. She didn’t tell them what to say — she listened very closely and was empathetic to them.

“When people talk to you as a journalist, they’re entrusting their life story to you and much of what she wrote about was not nice. Frankly, it was downright evil. And yet people would tell her about all the hurt and pain they went through. There were also joyful things she would write about, but she always listened and then she took what they gave her, this precious commodity, and wove a story.”

When it came to her journalism, D’Souza said, “she didn’t preach. She showed how it’s done, and in the end, she just showed how to do it better.”‘

Shared stories of her own life

Porter also used her journalistic toolkit to share parts of her own life, and her own story. In 2004, she produced the award-winning radio documentary Between Friends, about her own experience as a survivor of childhood sexual abuse by her father.

Neil Sandell co-produced the piece with Porter, whom he called “the bravest journalist” he’s ever known in a recent memoriam published on Medium, because of her willingness to be vulnerable and to go to dark places that others wouldn’t.

In her Third Coast Award acceptance speech in 2004, Porter shared what it was like to be on the other side of the microphone, Sandell said.

“She says, ‘It’s the humanity that you bring to the process at the beginning, and the middle and the end that counts.'”

Porter also spoke to the then-named Ryerson Review of Journalism about her own internal conversation — between mind and body — as she came to terms with a cancer diagnosis in 2017 that put a pause on her work.

While focused on healing and being with family and friends, Porter told the journalism review, “I think this, in a weird way, has given me an incredible opportunity a lot of people in our business don’t have, and that is the pause. The pause to reflect on what it is we do. Whether it has meaning. Whether it has value. Whether it is a healthy thing to do.”

In recent interviews, essays and academic articles, Porter was critical of her own reporting as she probed questions about the purpose of journalism, how it’s changed and how it can be better.

Canada owes a great debt to former <a href=”https://twitter.com/CBC?ref_src=twsrc%5Etfw”>@cbc</a> journalist Jody Porter, who has now left this world. She fought to cover the inquest into the deaths of seven First Nations high school students. She was there, every single day for 8 months. Her voice made change. Rest easy, my friend. <a href=”https://t.co/9ct2DLL7Mq”>https://t.co/9ct2DLL7Mq</a>

Porter returned to work for CBC in July 2020 before learning just a few months later that her cancer had returned.

During that time, in an interview with Canadaland, Porter spoke about the limitations of journalism. Talking about her multi-decade coverage of a lack of clean drinking water in First Nations, she called for journalism to move beyond just bringing awareness to issues.

“I just don’t see that awareness can be what we’re after here. It isn’t working,” she said.

“The act of telling stories and writing stories is a kind of magic, and I believe that because they are so powerful and they do have the potential for healing, we need to get better at it.”

In her last few months, Jody Porter worked on one final radio documentary. Listen to it here:

Superior Morning28:52Tribute to Jody Porter PART 2: ‘What You Believe In, Will Carry You Through’

The second part of our tribute to longtime CBC Thunder Bay reporter Jody Porter, who passed away this week at the age of 50. Hear her final documentary ‘What You Believe In, Will Carry You Through’.