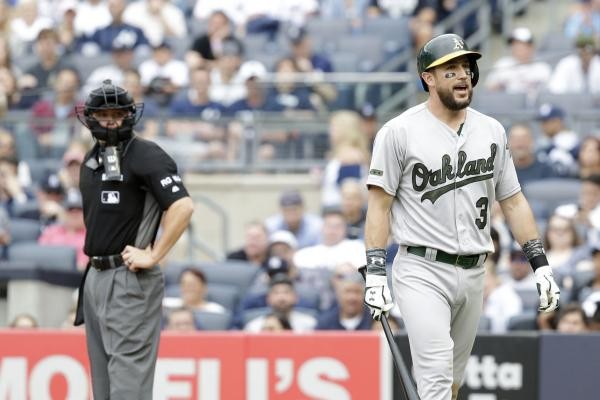 The Oakland A’s traded 3B Trevor Plouffe to the Tampa Bay Rays, the team announced Saturday morning. Plouffe had been designated for assignment on Friday to make room for rookie Matt Chapman. Oakland also sent cash in the deal ($2M+, via Susan Slusser, S.F. Chronicle), and in return they will receive either a player to be named later or cash.

This transaction ties up the loose end of Plouffe’s DFA. If the A’s hadn’t found a taker then they likely would have been stuck paying the rest of his salary while he moved on. Now the Rays will be responsible for at least $1 million of his original $5 million deal, and maybe more depending on what they end up sending back to the A’s.

Analysis: As for the PTBNL, I wouldn’t expect that to amount to anything. The point of this transaction was pushing Plouffe’s contract toward someone else now that he had been cut from the team.

There are now two ways this ends — either we get a filler prospect (like a Single-A reliever or something) while paying most of the rest of Plouffe’s money (about two-thirds of it, per Slusser), or we opt to forego the prospect and just get some of our money back instead.

And thus ends the Plouffe Saga. If the timing had been better I’d probably have really liked him. He’s been a quality 3B before, and I’ve heard only great things about him on a personal level. But this was never a fit on the 2017 roster, and to make it worse his offense turned out to be a black hole, son. Fortunately, between the quick DFA and the successful dumping of his contract, the A’s minimized or even downright eliminated any potential negative effects.

Best of luck to Plouffe in Tampa Bay!

Note: The Rays come to town July 17-19, so let’s get prepared for another edition of the Curse of the Former A’s!