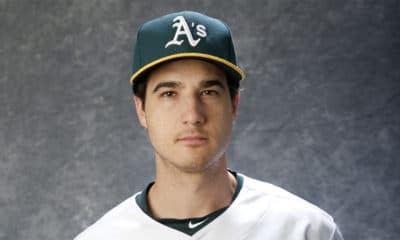 The Oakland A’s called up 1B/OF Mark Canha, the team announced Wednesday. To make room on the roster, reliever Michael Brady was optioned back to Triple-A Nashville.

Canha made the Opening Day roster and has played a total of 29 games with the A’s this year in his two previous stints with the big club. Despite a brief hot streak in May, though, the 28-year-old has been unable to make the permanent jump to MLB, even during a healthy season. The power is there when he makes contact, but the strikeouts have been a problem and he offers little on defense.

Meanwhile, Brady only made it into one game during his second stint in Oakland, but he made the most of it. After the Giants blasted Sean Manaea off the mound on Tuesday in just three innings, Brady came in and pitched the final six frames to mop things up. In other words, he functionally made a start in terms of workload, throwing 76 pitches.

Analysis: The A’s are about to play two games in an NL park with no DH, so bringing up an extra bat is the smart move to allow for increased pinch-hitting opportunities. They’re facing lefty starters in both games (Matt Moore, Ty Blach), so the spare hitter is the righty Canha instead of the lefty Matt Olson.

I expect Canha will only last a couple days in Oakland this time around. Kendall Graveman is listed as the starter for Thursday, which means another move will be made tomorrow to activate him from the disabled list. By Friday, my guess is the roster will include Graveman in the rotation, an 8-man bullpen, and no Canha on a 3-man bench.

As for Brady, he’s part of what is now a 5-headed mopup reliever taxi monster (with Neal, Montas, Castro, and Josh Smith). They are swapped around interchangeably as needed to fill the space, and Brady is the odd man out for now while he rests from his long outing. Castro and Smith are still in Oakland, and Montas was last sent down on Sunday (10-day minimum before being recalled), so if another reliever is needed for the game of musical roster chairs this week then it’ll probably be Zach Neal. Update: Never mind, Neal also threw five innings on Tuesday. Perhaps Chris Bassitt then?