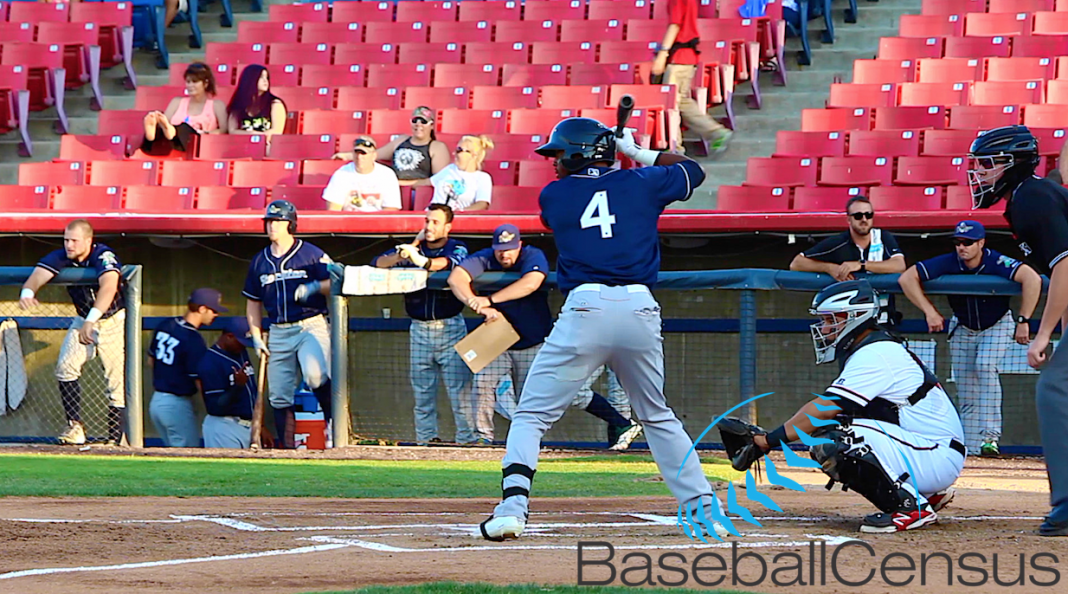 Outfielder James Harris spent the first six weeks of the season on the disabled list, but he returned to action last week for High-A Stockton. There’s good news and bad news in that statement — good that he’s back, but unfortunate that he’s still stuck at the same level as last year with the Ports.

Harris was drafted by the Rays back in 2011, in the first round out of Oakland Tech high school, and by 2015 he’d found his way to the organization of his hometown A’s. He quietly hit well in Single-A Beloit, but it was his performance in Stockton last year (120 wRC+) that put him firmly on the edge of our prospect radar. He even earned a late promotion to Double-A last summer, and nearly cracked our Community Prospect List during the winter.

Still only age 23, Harris was a name to watch entering 2017 but saw his progress hit the pause button. I don’t know exactly why he missed the beginning of the year — back in April, Athletics Farm reported that he “passed out a couple times during spring training and is undergoing some tests,” but I don’t know if that was related to his absence. Meanwhile, Double-A Midland’s four outfielders are all playing well, leaving no room for Harris to move up just yet even if he is ready to make that jump.

(Those numbers represent a decent enough start to his season, and he added a memorable moment on Thursday. The Ports went to extra innings against Lancaster, and both teams scored three runs in the 10th. Then, in the 11th, Stockton loaded the bases and Harris drew a walk-off walk to win it.)

Of course, having too many worthwhile prospects is a good problem to have, especially in the outfield where the A’s are weak at the highest levels, and if Harris kicks things back into gear then I have no doubt he’ll find his way up to Midland promptly. He’s only played nine games, so you could think of this like a rehab stint after missing so much time. But the fact remains that one of the RockHounds’ outfielders will have to move up in order for Harris to get his own promotion when he’s ready.

Thus the good news/bad news. It’s great to see Harris back on the field, but for now he’s just re-taking a test he’s already passed. It’ll be even better to see him finally get his swings in the upper minors.

Stockton got another player back from the DL recently: catcher Sean Murphy, last year’s 3rd-round pick and No. 25 on our CPL. He wasted no time getting hot, as he’s recorded a hit in each of his 10 games since returning, with a homer and a 1.017 OPS.

He has also thrown out 4-of-14 base stealers, using his 70-grade throwing arm.

Rest of the lineup

A look through the rest of Stockton’s intriguing group of hitters.

Ramirez and Brown lead with 230 plate appearances. Murphy and (especially) Harris have less playing time than the rest due to DL stints.

This lineup is still packed with fun names, even if some of them are fringe. As for the next men up, my picks would be Harris and Mikey White. Both are repeating High-A after full 2016 seasons in Stockton, with Harris coming off his successful campaign and White hitting much better this time around.

It’s time for the A’s to clear some of their veteran chaff out of Triple-A (Parmelee, LaMarre, etc.), which in turn could allow them to promote one of Midland’s current outfielders (Marincov, Vertigan?), which would clear space for Harris to move up. (Or, if Harris needs more rehab time, then Seth Brown is also repeating High-A and could be worth a look.) As for White, the RockHounds just put both of their starting middle infielders on the DL, so there’s certainly space.

Other than those two players (three with Brown), the rest of the top hitters are only two months into their High-A careers and I’m happy to let them plug away a bit longer before bumping anyone up. In fact, removing Harris and White/Brown from the picture would help clear more playing time for some of the other interesting hitters stuck in part-time roles (Vidales, Siddall, etc.). Let’s get this line moving.

The Ports have seen some of their best arms promoted to Double-A lately, including starters Brett Graves and Evan Manarino. There haven’t been any exciting replacements, though, with some of those innings being filled by MLB guys on rehab stints. (Jesse Hahn started Thursday, and Sean Doolittle is listed on the roster now as well.)

Meisner and Puk are second and third among Cal League starters in swinging strike rate.

No one in the bullpen is really lighting it up, though lefty Jared Lyons has probably been the best of the group (3.91 ERA, 3.09 FIP). RHP Nolan Blackwood and LHP Will Gilbert have been among the league’s best at inducing grounders, but both have also handed out too many walks. Overall this staff is probably ready for some new blood — might I suggest starters Brendan Butler and/or Dalton Sawyer, both pitching great for Single-A Beloit?

Reliever Carlos Navas started for Midland, but Graves came in after a few innings so I’m calling him the starter. And Zack Erwin (from the Brett Lawrie trade) is back on the mound for Beloit after an extended injury absence!