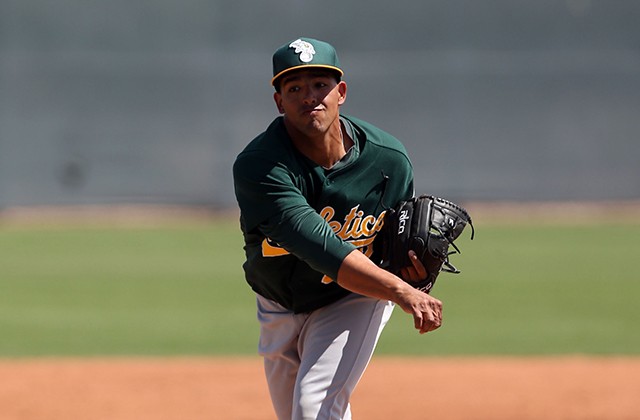 Welp never mind, didn’t see this before I finished writing this post:

Bad injury news down-on-the-farm for the #Athletics: promising reliever Jake Sanchez is out for the year with a right ulnar stress fracture

Here’s the rest of the article, lightly edited:

The Oakland A’s thinned out their bullpen on Sunday by trading away Sean Doolittle and Ryan Madson. With the rebuild approaching full tilt, opportunities could emerge for new names to step up over the next couple months of non-contending baseball. What other Triple-A relief prospects might be in line for MLB auditions?

One name sticks out above the rest right now, and that is right-hander Jake Sanchez. The 27-year-old former starter is in his second season as a fireballing reliever, after posting a 2.27 FIP in Double-A last year as Midland’s closer. He hasn’t missed a beat since moving up to Triple-A in late May:

That’s not to say that he needs to be in Oakland tomorrow; he’s only made 14 appearances for Nashville this year, so more time there wouldn’t hurt. But sometime between now and the end of September a spot will open up with the big club, whether because of an injury or another trade or simply rosters expanding in the season’s final month. Whether that opportunity comes in late August or next week, Sanchez would be my top pick to take the next turn in the A’s pen, even though there are other “safer” options on Nashville’s roster who have MLB experience under their belts.

Out of the whole group, I’d personally be most interested in seeing Sanchez next. He’s the top performer, and might be the top chance at revealing a hidden gem for next year. After that, perhaps the lefty Doubront, who is racking up strikeouts in his own return from Tommy John and somehow still hasn’t turned 30 years old yet. We’ll see what the A’s decide next time a job opens up!

For Nashville, Walter hasn’t pitched since getting blown up in consecutive outings on June 30 and July 5.