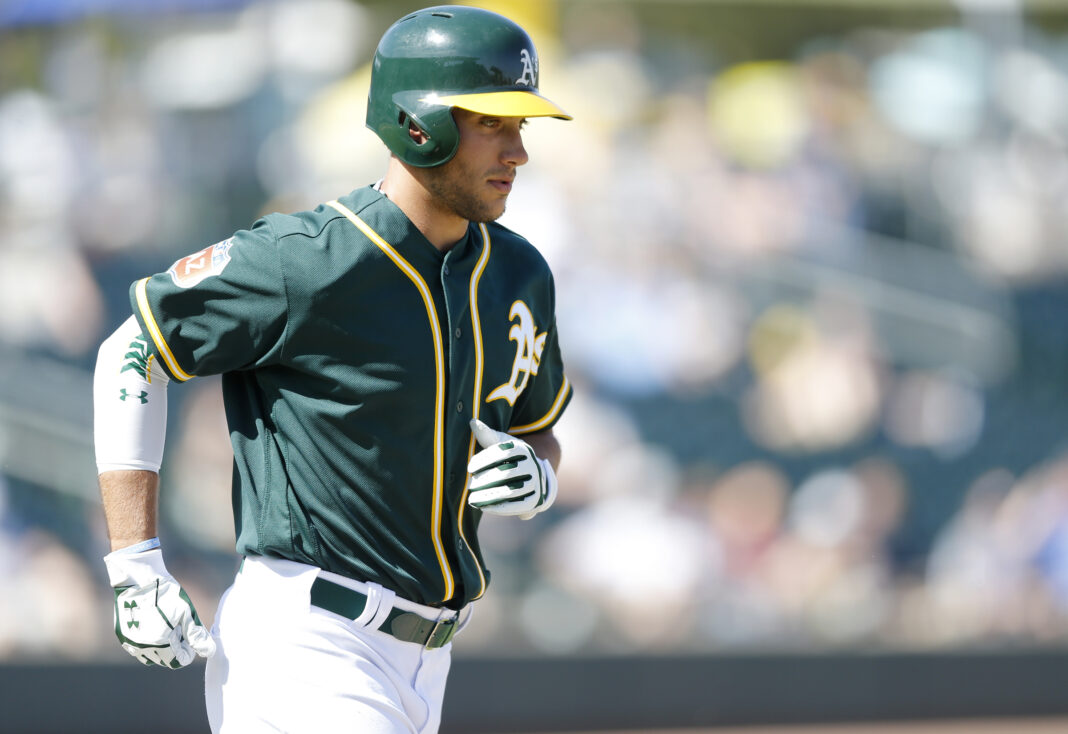 The Oakland A’s have a slew of MLB-readyish hitting prospects at Triple-A Nashville, but one of them will be out of the picture for the time being. Catcher Bruce Maxwell has gone on the disabled list with a strained oblique, reports Athletics Farm (via Sounds play-by-play broadcaster Jeff Hem). He isn’t expected back until at least mid-June.

This is a particularly unfortunate injury for Oakland’s youth movement. Other than Chad Pinder, no A’s hitting prospect has gotten more MLB time this year than Maxwell. There are two reasons for that — one is that his Triple-A performance has earned him those promotions, and the other is that his premium defensive position (catcher) has opened up some extra opportunities.

In the meantime, the next catcher on the MLB depth chart is 29-year-old Ryan Lavarnway. He was signed as a minor league free agent and starred for Team Israel in the World Baseball Classic in March, and now he’s hitting decently in Triple-A. He’s not part of the youth movement like Maxwell (though he is a former Top 100 prospect), but at least his presence means the A’s still have a perfectly viable backup catcher available in an emergency (i.e., Vogt or Phegley get hurt in the next month).

Best of luck in your recovery, Bruce!

Hot takes: It’s always a bummer when a player gets hurt, but this case is nothing to freak out about for now. He’s not out for the year or anything, and it didn’t look like he was getting an everyday chance before at least July anyway (barring injury to Vogt/Phegs). The next time the A’s want to call up a spare hitter for a few days, instead of putting Maxwell behind the plate and shifting Vogt to DH, they can leave Vogt where he is and bring up any other prospect they want and just DH that guy.

If the current recovery timetable holds, then Maxwell should be back well before missing any long-term opportunities.

Last week, my Prospect Watch headline was that Matt Olson was heating up. In four games since then, he’s 9-for-19 with 2 homers, 3 doubles, and only 4 Ks. Yup, still hot.

This is the point of the season in which you might expect me to be starting a Free Bruggy movement. Jaycob Brugman, my favorite sleeper prospect, is healthy and hitting well in Triple-A (again), and the A’s are getting desperate at a position he can play (CF). And yet, that will have to wait, because Free Olson has become more urgent.

On April 23, Olson played in an MLB game with the A’s. He returned to Nashville’s lineup on April 28, and here’s what he’s done in 22 games since:

That’s nine homers in 101 plate appearances over 22 games, which works out to somewhere in the range of 50-60 dingers over a full season. And he’s not striking out too much to achieve all that power, which has long been a key weakness in his game.

This is not a drill, folks. Olson is 23 years old, and he got a full season of Triple-A and an MLB debut under his belt in 2016. Now he’s clicking, and it’s getting too big to ignore. Remember when Maxwell went absolute ham last summer, and hulked out so hard that the A’s had no choice but to bring him up? Olson is almost that hot right now.

The question is, where do you put him? Oakland is already going out of its way to fit Chad Pinder and Mark Canha into the everyday lineup, as they should be, and I don’t want to interrupt that trend. There are four positions Olson could fill: 1B, RF, LF, DH. Between Alonso, Joyce, Canha, Khrush, Healy, and perhaps Pinder squeezed into the outfield, the landscape is already crowded. You can fit Olson onto the roster anytime you want by sending out the pointless eighth reliever, but can you fit him into the lineup once he’s here?

To me, the answer is obvious: It’s time to start moving on from the stopgap veterans, or at least one of them. Whether that means benching someone or working out an early-summer trade, I really don’t care. This year, and this team in general, can’t be about those guys, and it can’t be about spending two more months trying to milk a C-grade prospect out of a Trevor Plouffe deadline deal in late July. Not if the A’s want to win in the foreseeable future. The top priority has to be on the current group of rookies, on doing whatever it takes to bring up a guy like Olson right now when he’s as hot as he currently is.

Don’t waste another season being polite to a few veterans, A’s. Part of prospect development is getting the guy adjusted to MLB once he’s ready, and this is the time to do it. Free Matt Olson, and do it ASAP, in the next couple weeks. His development dictates it, and that’s the only thing that should matter when you’re rebuilding.

Rest of the lineup

A few notes on the other top hitters.

I’ve listed Renato as a LF because he’s getting legitimate time out there, with a team-leading 12 games at the position. He’s also gotten time at 3B and a couple games at 2B (lol), but with so much superior defensive competition in the infield it’s hard to see him ending up there. Lockard has more info on Nunez in LF.

Daniel Gossett managed only one quality start in his first eight outings this year. He’s had problems with walks, and that wildness has contributed to poor efficiency and short outings. He finally put together a good game on Monday, though.

Gossett tossed eight scoreless innings against Sacramento, and he didn’t walk a single batter. It was the first time this season he’d gone without either a walk or a run, much less both. His line: 8 ip, 0 runs, 6 Ks, 0 BB, 4 hits.

For all the preseason excitement about Gossett, he had basically no Triple-A experience entering the year. Some patience were in order, and they’ve been needed after a slow start. Now we’ve seen our first glimpse of the right-hander working through his struggles.

Mengden is now officially back in the Triple-A rotation, rather than on a rehab assignment.