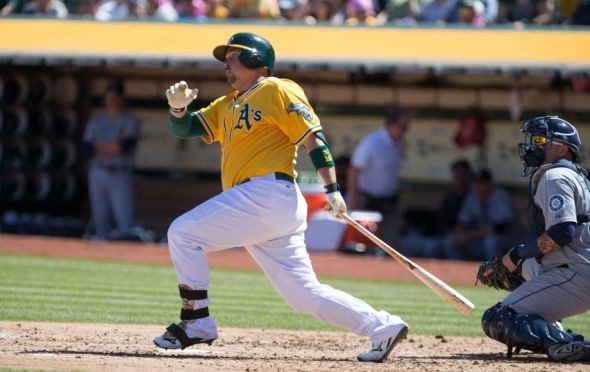 Since the advent of the designated hitter in 1973, the A’s have had no worse than a .637 OPS from the DH position. That .637 mark occurred in 1987 when the position was headlined by a pair of aging stars in the twilight of their careers: 41-year old Reggie Jackson, who was in the final season of his 21-year career, batted just .220 while 39-year old Ron Cey hit .221. Although a young Jose Canseco would add 30 starts at the DH position and hit 31 home runs, he did most of that damage while playing in left field, contributing just 5 home runs while assigned the DH role that season.

Fast forward to 2017 and the disappointing Oakland lineup is putting up its worst season statistically from the position in franchise history. Coming into their series against Cleveland, A’s designated hitters, headlined by Ryon Healy, Chad Pinder, Stephen Vogt, and Jed Lowrie had combined to slash .195/.264/.332 with 6 home runs and 16 RBIs. Their .595 OPS place them 7th-worst in American League history, well within reach of the Minnesota Twins’ all-time OPS low of .545, which was set during the strike-shortened season of 1981.

The A’s production in 2017 has been so bad, in fact, that they could also conceivably break the record for lowest RBI total since that same strike-shortened season in which DHs from both the Kansas City Royals and the Toronto Blue Jays combined to drive in 36 runs in just over 100 games played that season.