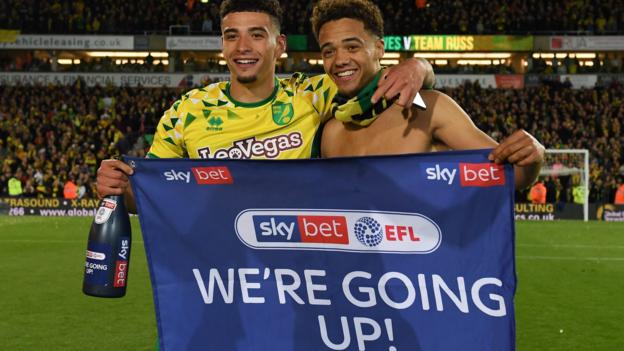 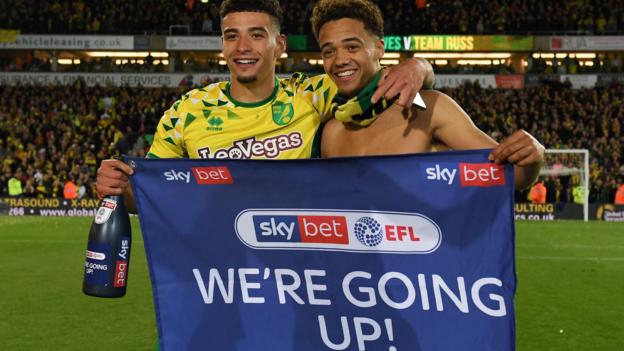 Norwich City confirmed their promotion to the Premier League with victory over Blackburn Rovers at Carrow Road.

The Canaries needed just a point to get over the line and settled any nerves when Marco Stiepermann drilled low into the bottom corner from outside the box.

After Blackburn’s Darragh Lenihan escaped with a yellow for a last-man foul on Teemu Pukki, Norwich doubled their lead through Mario Vrancic’s sublime 25-yard strike into the top corner.

Lewis Travis soon pulled one back but the hosts comfortably saw out the win, Onel Hernandez’s thumping effort against the bar the closest they came to a third.

Daniel Farke’s side are likely to be joined in the top flight by Sheffield United – whose promotion will be sealed if Leeds United fail to beat Aston Villa on Sunday – with the pair to contest the Championship title on the final day.

A draw at Villa on 5 May will be enough for the Norfolk side to be crowned champions, with the Blades three points behind them.

Stiepermann’s 10th goal of the season was much-deserved as Norwich raced out of the traps in a carnival atmosphere, while Bosnia midfielder Vrancic – making his first start since February – finished ruthlessly from range as Blackburn failed to close him down.

Rovers kept the the Canaries on their toes with a first professional goal for Travis, a side-footed strike that beat Tim Krul, but they could not create another clear-cut chance as they hoped to extend their four-game winning run.

Emi Buendia’s bicycle kick forced a save from Jayson Leutwiler and Hernandez struck the woodwork as Norwich expressed themselves in the second half, with victory taking them past the 90-point mark in a league season for only the third time.

Norwich were last in the top-flight in the 2015-16 campaign – finishing 19th – and have now been promoted to the modern-era Premier League on four occasions.

Striker Pukki started just 14 league games during his only previous stint in British football – a two-year spell at Celtic – so some were underwhelmed when Norwich signed him on a free transfer last summer.

But the Finland international has exceeded all expectations, leading the Championship’s goalscoring charts with 28 goals and winning Player of the Season at the EFL awards.

The Young Player of the Season gong went to 19-year-old right-back Max Aarons, who has burst onto the scene after only making his senior league debut against Norwich’s arch-rivals Ipswich Town in September.

Northern Ireland international Jamal Lewis has also shone on the other side of the backline, with the energetic pair giving Farke’s side incredible attacking impetus throughout the campaign.

Diminutive playmaker Buendia has shown a level of touch, skill and decision-making which should see the Argentine thrive in the Premier League, while Christoph Zimmerman has held things together at the back in a side which believes attack is the best form of defence.

Despite doing the business early on against Blackburn, a hallmark of Norwich’s run to promotion has been an extraordinary knack of scoring crucial late goals – they have netted 30 times in the league after the 75th minute, eight more than any other side.

The Canaries set the tone with a 94th-minute equaliser at Birmingham on the opening day, with last-gasp goals at home to Millwall, Bolton Wanderers, Nottingham Forest and Sheffield Wednesday all earning them points that would prove pivotal.

The game with Forest on Boxing Day was particularly outstanding, as Norwich recovered from 3-0 down after 76 minutes to draw 3-3, with goals in the 94th and 98th minutes.

It has taken more than simply a never-say-die attitude – fitness, composure and a ruthless streak have made late goals feel an inevitability at times, cheered on by capacity crowds at Carrow Road.

They may have been promoted to the modern-era Premier League on three previous occasions, but the sheer volume of memorable moments this season means supporters are sure to look back on it as one of the club’s best ever.