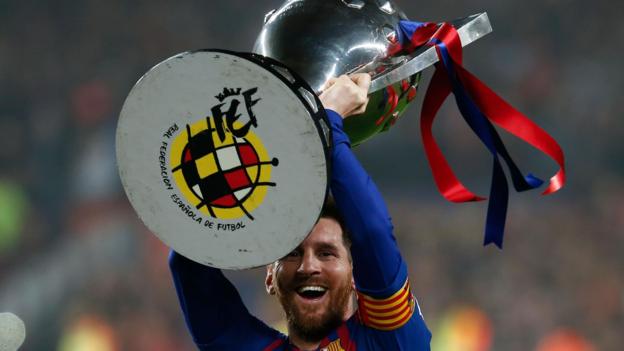 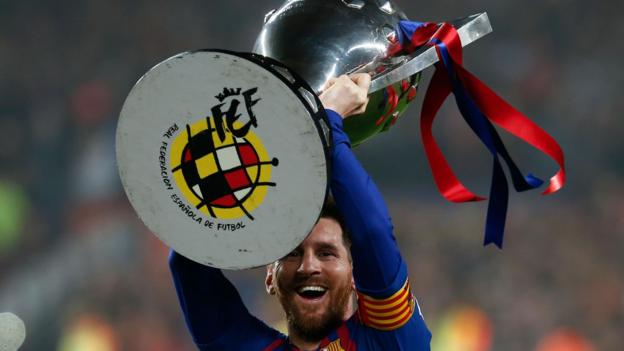 Barcelona wrapped up their 26th La Liga title with a sluggish victory over Levante thanks to a goal from second-half substitute Lionel Messi.

Ahead of Wednesday’s Champions League semi-final first leg with Liverpool, Messi began the game on the bench.

The Argentina forward came on at the interval following a goalless first half and scored just after the hour.

He latched on to Arturo Vidal’s header and beat two defenders before stroking the ball past Aitor Fernandez.

Barcelona did not have everything their own way and Levante almost spoiled the party when they twice went close to equalising in the second half.

Jose Luis Morales broke clear on the left edge on the edge of the box only to fire into the stands.

Then at the death Enis Bardhi’s shot hit the woodwork and it bounced into the hands of Barca goalkeeper Marc-Andre ter Stegen on the line.

Such has been Barcelona’s recent La Liga dominance – this is their fourth Spanish title in five years and Messi’s 10th overall – that determining whether this season will be heralded as a glorious one, or simply a good one, will depend on their performance in other competitions.

The defending champions will doubtless have taken satisfaction from delivering the title in front of their home fans for the first time since 2010; their last four titles have been won away or without playing.

They did so with three games to spare and in doing so closed the gap on Real Madrid’s record of 33 La Liga titles to seven.

However, it is the prospect of a treble, featuring the Champions League and Copa del Rey, which will now command their serious attention.

Their performance against Levante was far from a vintage one and the celebrations of Barcelona’s players when they lifted the trophy after full-time were relatively conservative.

The Catalans have not reached a Champions League final since 2015, when they last won the treble, and the focus will now switch to the first leg against Liverpool at the Nou Camp.

They also face Valencia in the Copa del Rey final on Saturday, 25 May.

Liverpool’s scouting dossier on their opponents in the last four of Europe’s elite competition will, of course, have been compiled well in advance of Levante’s visit.

So the absence of Messi from Barcelona’s starting line-up will not have impacted upon their plans for Wednesday’s first leg at the Nou Camp.

If he was watching from his home in Formby on Merseyside, Liverpool manager Jurgen Klopp will surely have been encouraged by what he saw 24 hours after his side thrashed Huddersfield 5-0 at Anfield.

In particular, how Levante, despite being embroiled in a relegation battle, were able to frustrate Barcelona with a stoic first-half defensive display will have caught his eye.

Levante goalkeeper Fernandez made a number of important saves before the break, although they were routine rather than spectacular.

At 1-0 down Levante also squandered chances to equalise.

It was not until Messi – La Liga’s top scorer with 34 goals this season – came on as a second-half substitute that the home side sparked into life.

Stop Messi, and stop Barcelona might be too simplistic a formula. It will nevertheless be the one which will vex Klopp the most between now and Wednesday.