North Korean leader Kim Jong Un met with the Chinese President on a surprise trip to Beijing this week, his first visit abroad since he took power in 2011.

Kim traveled to the Chinese capital because he felt compelled to personally inform President Xi Jinping of the rapid diplomatic developments on the Korean Peninsula in recent weeks, according to China’s state-run Xinhua news agency.
The visit is a stunning shift for Kim, who appears to be fashioning himself as a leader in search of a peaceful solution to the crisis on the Korean Peninsula. It’s in sharp contrast to 2017, when Kim oversaw a string of missile and nuclear tests that drew the ire of the international community.
Kim’s trip, which was shrouded in secrecy, was the first of three potential meetings with some of the world’s most powerful leaders.
Kim is set to attend a summit with South Korean President Moon Jae-in next month, and, in a bombshell move, US President Donald Trump has also accepted an invitation to meet Kim. It would be the first face-to-face encounter between a sitting US president and a North Korean head of state.

Analysts said the visit was a courtesy call aimed at shoring up Pyongyang’s ties with China, a traditional ally and major trading partner. Leaders from the two countries haven’t met since 2011, with ties souring after Kim purged some of Beijing’s allies in North Korea and the isolated nation relentlessly pursued its development of nuclear weapons.
Kim called for a “new era” in bilateral relations in a letter to Xi published on North Korean state media and invited the Chinese President to visit Pyongyang.
“In this spring full of happiness and hopes, I believe my first meeting with General Secretary Xi Jinping will yield abundant fruits of DPRK-China friendship, and facilitate peace and stability on the Korean Peninsula,” said Kim, referring to Xi by his title as leader of the Chinese Communist Party.
Kim made his trip “at the invitation” of Xi, state media from both countries reported. While billed as an unofficial visit, Kim got red-carpet treatment in Beijing, including a banquet at the Great Hall of the People. 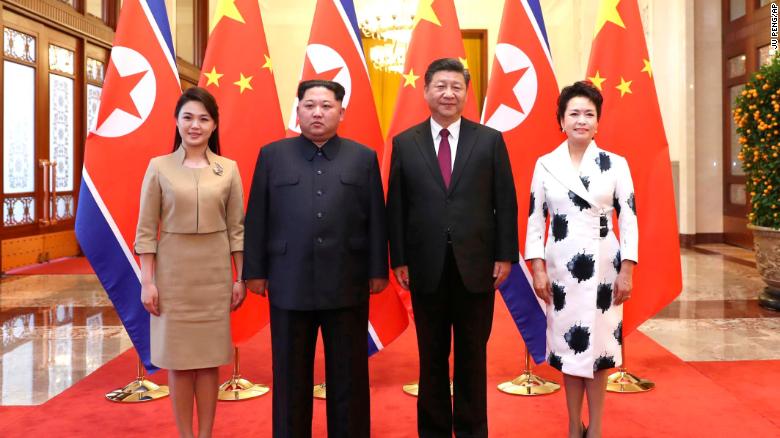 North Korea’s diplomatic charm offensive is likely part of an attempt to show Kim as a world player equal in stature to leaders like Xi, said Jean Lee, an analyst at the Hyundai Motor-Korea Foundation Center for Korean History and Public Policy at The Wilson Center.
“We’re seeing a carefully crafted North Korean strategy on diplomacy unfold on the world stage, starting with Beijing,” Lee said.
“He’s positioned himself as the peacemaker, he’s made all the first moves.”
Kim told his hosts that he chose China as his first overseas destination as leader to show “his will to carry forward the tradition of DPRK-China friendship, and how he valued the friendship between the two countries.”
Chinese state media quoted Kim as saying that he is committed to the denuclearization of the Korean Peninsula, a key Chinese goal, but Lee warned Kim would seek major concessions in exchange for giving up nuclear weapons.
“The issue of denuclearization of the Korean Peninsula can be resolved, if South Korea and the United States respond to our efforts with goodwill, create an atmosphere of peace and stability while taking progressive and synchronous measures for the realization of peace,” Kim said, according to Xinhua. 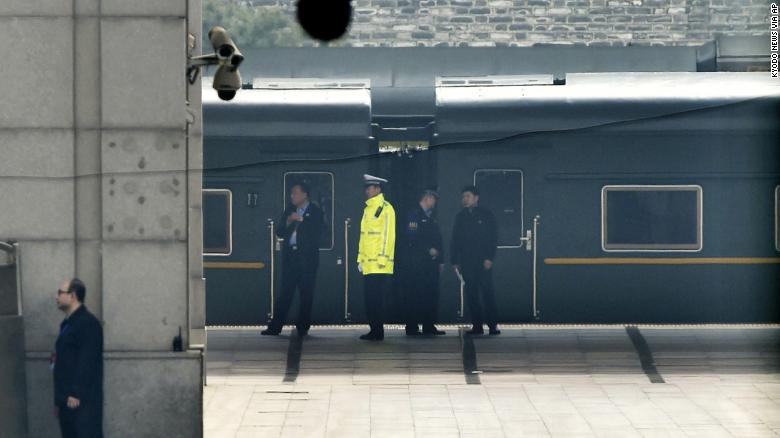 North Korean leader Kim Jong Un arrived in China by train on March 25 and crossed the border back to Pyongyang on March 28.

This trip means that Kim is no longer a total novice when it comes to international leaders — crucial experience before he meets Moon and Trump.

If not a seasoned pro, at least he has already met and bonded with arguably the world’s most important person — Xi Jinping.

He can also feel that, to a certain extent, China has his back. The price of that is the headline of this visit: Putting the nukes on the table.

For China, the visit allows the country to reassert itself as a kingpin in the process, after the optics of a potential Kim/Trump summit catching Beijing by surprise.

By the way he received Kim in Beijing, Xi is showing that in spite of its observance of sanctions, and applying pressure, China is not part of an anti-North Korean coalition.

Xi also painted a rosy future for North Korea’s economy that, without saying it explicitly, is one that can only exist when North Korea has done enough to get sanctions lifted. A carrot that Kim desperately needs.

As well as Xi, Kim held talks with his deputies, including Li Keqiang, the Chinese premier, and Wang Qishan, the Chinese vice president who is considered one of Xi’s closest confidantes.
The trip took place from March 25 to 28, with Kim and his wife traveling by train. Rumors first surfaced about a potential visit by a high-level North Korean representative Monday night in Beijing, when pictures of what appeared to be Kim family’s distinctive green train surfaced online.
The White House said in a statement that the Chinese government briefed them on the meeting Tuesday and claimed some credit for the development.
“We see this development as further evidence that our campaign of maximum pressure is creating the appropriate atmosphere for dialogue with North Korea,” White House press secretary Sarah Sanders said.
The US has spearheaded efforts at the United Nations to sanction North Korea and pressured China to implement measures targeting Pyongyang’s ability to import fuel and bring in revenue.

Xi and his wife, Peng Liyuan, also held a welcome banquet for their visitors. Kim told his hosts that he chose China as his first overseas destination as leader to show “his will to carry forward the tradition of DPRK-China friendship, and how he valued the friendship between the two countries.”
Xi said Beijing is willing to work with North Korea to “promote long-term healthy and stable development of China-DPRK relations, benefit the two countries and two peoples, and make new contribution to regional peace, stability and development,” Xi said.
North Korea’s state-run Korean Central News Agency (KCNA) also confirmed the visit, saying Kim was “accorded cordial hospitality with utmost sincerity to him in token of warm comradely friendship and friendly feelings during his China visit.”
In a letter published in KCNA, Kim said that his meeting with Xi would help move the “traditionally friendly relations between North Korea and China forward to be more suitable to the demands in the new era.”
KCNA also reported that Xi accepted an invitation to visit North Korea “at a convenient time” although Chinese state media didn’t mention this.
Share
Facebook
Twitter
WhatsApp
Pinterest
Linkedin
ReddIt
Email
Print
Tumblr
Telegram
Mix
VK
Digg
LINE
Viber
Naver
Previous articleLinda Brown, centre of Brown v Board civil rights case, dies
Next articleNelson Mandela’s golden hand casts sell for $10m in bitcoin