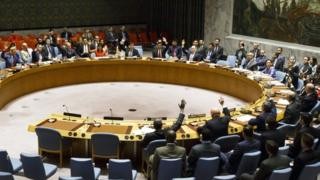 The United Nations Security Council has agreed on fresh sanctions against North Korea over its missile programme.

A resolution banning North Korean exports and limiting investments in the country was passed unanimously.

Pyongyang tested two intercontinental ballistic missiles in July, claiming it now had the ability to launch a strike against the entire United States. The tests were widely condemned.

However, experts doubt the capability of the missiles to hit their targets.

The tests were condemned by South Korea, Japan and the US, and prompted the drafting of the new UN sanctions.

The export of coal, ore and other raw materials to China is one of North Korea’s few sources of cash.

Estimates say that North Korea exports about $3bn worth of goods each year – and the sanctions could eliminate $1bn of that trade.

Earlier this year, China suspended imports of coal to increase pressure on Pyongyang.

However, repeated sanctions have so far failed to deter North Korea from continuing with its missile development.

China, North Korea’s only international ally and a veto-wielding member of the UN Security Council, voted in favour of the resolution this time. It has often protected Pyongyang from harmful resolutions in the past.

The US ambassador to the UN, Nikki Haley, praised China’s stance.

“Today the Security Council has come together to put the North Korean dictator on notice,” she said in the council chamber after the vote.

“North Korea’s irresponsible and careless acts have just proved to be costly for the regime.”

China’s ambassador, Liu Jieyi, said the resolution showed that the world was “united in its position regarding the nuclear position on the Korean peninsula”.

He welcomed US statements that it was not seeking regime change or prioritising the reunification of Korea.

The isolated state’s repeated missile and nuclear weapon tests have been condemned by neighbours in the region.

But South Korea says it may hold direct talks with the North during a regional meeting this weekend.

Foreign Minister Kang Kyung-wha said she was willing to talk to her counterpart from Pyongyang, if the chance “naturally occurs”.

Foreign ministers from the Association of Southeast Asian Nations (Asean) are meeting in Manila in the Philippines.

“If there is an opportunity that naturally occurs, we should talk,” Ms Kang told the agency.

“I would like to deliver our desire for the North to stop its provocations and positively respond to our recent special offers [for talks] aimed at establishing a peace regime.”

US Secretary of State Rex Tillerson will also be attending the weekend’s talks, where North Korea’s nuclear programme is expected to be a main topic.

As the meeting began, Asean members issued a joint statement saying they had “grave concerns” over North Korea’s actions, which “seriously threaten peace”.