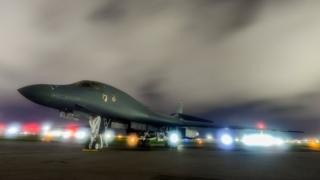 North Korea says it is considering missile strikes near the US Pacific territory of Guam, just hours after President Donald Trump threatened Pyongyang with “fire and fury”.

The North’s official news agency said it was mulling a plan to fire medium-to-long-range rockets around Guam, where US strategic bombers are based.

The statement marks a sharp rise in rhetoric between the two countries.

The UN recently approved further economic sanctions against the country.

President Trump’s comments followed a media report that claimed the North had made a nuclear warhead small enough to fit inside its missiles.

The Washington Post report, which cited US intelligence officials, suggests North Korea is developing nuclear weapons capable of hitting the US at a much faster rate than expected.

The North’s official Korean Central News Agency (KCNA) said its military was “carefully examining the operational plan for making an enveloping fire at the areas around Guam with medium-to-long-range strategic ballistic rocket Hwasong-12”.

It said the plan would be reported to the Supreme Command after “full examination and completion” and put into practice at the order of leader Kim Jong-un, South Korea’s Yonhap news agency reported.

The heated rhetoric between the US and North Korea intensified after Pyongyang tested two intercontinental ballistic missiles (ICBM) in July, claiming it now had the ability to hit the US.

Mr Trump told reporters on Tuesday: “North Korea best not make any more threats to the US. They will be met with fire and fury like the world has never seen.”

“The great leaders that I have seen, they don’t threaten unless they are ready to act and I’m not sure that President Trump is ready to act,” said Senator McCain.

Perhaps Mr Trump believes that no hyperbolic threats should go unmatched or that apocalyptic warnings are the only ones the North Korean leadership will understand. Perhaps he – intentionally or not – is pursuing a Nixonian “madman” style foreign policy, where adversaries will tread lightly to avoid triggering the wrath of an unpredictable US commander-in-chief.

When the leader of the world’s greatest superpower, the only nation ever to have used nuclear weapons on an enemy, talks of unprecedented “fire and fury”, however, those words have consequences.

During his presidential campaign Mr Trump criticised his predecessor Barack Obama for not enforcing a red line against Syria’s use of chemical weapons. Now President Trump has drawn a fiery bright line of his own with North Korea – one that could commit the US to a perilous course of action if his words go unheeded.

North Korea reacted with fury after fresh sanctions were announced on Saturday by the UN following repeated missile tests.

The sanctions aim to reduce North Korea’s export revenues by a third.

KCNA said North Korea would retaliate and make “the US pay a price” for drafting the new measures.

It called the sanctions a “violent violation of our sovereignty”, the news agency said.

China, which is Pyongyang’s closest ally, has said it is “100%” committed to enforcing the latest round of sanctions.

Russia and China have previously differed with others on how to handle Pyongyang, but in recent months have joined calls for North Korea to stop its missile tests – while also urging the US and South Korea to halt military drills, and withdraw an anti-missile system from the South.