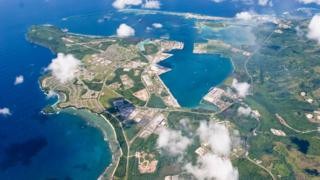 US Secretary of State Rex Tillerson says there is no imminent threat from North Korea, despite Pyongyang saying it was considering strikes on the US Pacific territory of Guam.

But the president has since boasted on Twitter about the US nuclear arsenal.

In early morning tweets posted from New Jersey, where he is holidaying, Mr Trump said that the US nuclear arsenal was “more powerful than ever before”, but added he was hopeful “we will never have to use this power”.

The tweets came after escalating rhetoric between the two sides, with the island of Guam – home to US military bases, strategic bombers and about 163,000 people – the focus of attention.

My first order as President was to renovate and modernize our nuclear arsenal. It is now far stronger and more powerful than ever before….

…Hopefully we will never have to use this power, but there will never be a time that we are not the most powerful nation in the world!

Stopping in Guam for a refuelling stop after a trip to South East Asia, Mr Tillerson said he was hopeful a global “pressure campaign”, involving both Russia and China, could lead to new dialogue with Pyongyang “about a different future”.

He defended President Trump’s earlier language, saying that North Korean leader Kim Jong-un did not understand diplomatic language, and a strong message was needed that he would understand.

The top US diplomat added the situation had not dramatically changed over the last few days, and that Americans “should sleep well at night”.

Analysis: Tillerson gets his broom out

As Donald Trump made his “fire and fury” threat against North Korea, the lone camera in the room zoomed in for a tight shot. It would have been telling to see the effect those words had on his advisers.

Did they nod knowingly or look surprised? Was this part of the plan or an off-the-cuff presidential remark they’d have to clean up?

A day later and thousands of miles away, Rex Tillerson had out his mop and broom. The secretary of state said Mr Trump was merely reasserting that the US would defend itself if attacked, using language North Korea would understand.

That’s not exactly what the president said, however. He warned of retribution if Kim Jong-un continued to make threats – punishing words with action.

It could simply be unfortunate phrasing from a man who is sometimes loose with words. Mr Tillerson would not be the first presidential aide intent on framing Mr Trump’s blunt statements in a softer light.

With the president touting US nuclear might and test-firing an ICBM, however, the secretary of state – already considered to have little sway in this administration – may find his efforts at clarification buried in a torrent of bluster.

North Korea has continued to pursue its nuclear and ballistic missile programmes despite successive rounds of UN sanctions.

On Tuesday, media reports in the US claimed the North had achieved its goal of making a nuclear warhead small enough to fit inside its missiles.

While not confirmed, this was seen as one of the last obstacles to North Korea being a fully nuclear-armed state.