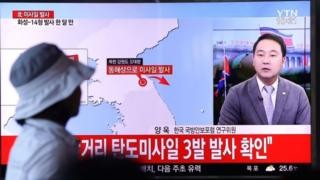 North Korea has fired a missile that flew over northern Japan before crashing into the sea.

No effort was made by the Japanese to shoot down the missile, which was launched early in the morning local time, triggering safety warnings.

The missile broke into three pieces before it landed, local media reported.

There has a been a wave of North Korean missile tests but it is the first time in eight years that one has flown over Japan.

On Friday and Saturday North Korea fired three short-range missiles into the sea off its eastern coast.

As this latest missile flew towards Japan warning alarms went off across northern Japan but public broadcaster NHK said there was no sign of any damage.

Chief Cabinet Secretary Yoshihide Suga described the latest test as an “unprecedented” threat. He said that Japan would take “appropriate steps” in response.

Japan is likely to see the test as a serious escalation of tensions given the missile’s flight path, the BBC’s Yogita Limaye in Seoul says.

The Pentagon said that Tuesday’s test did not represent a threat to the US and the military was now working to gather more intelligence about it.

Earlier this month North Korea threatened to fire missiles towards the US Pacific territory of Guam, while US President Donald Trump warned Pyongyang would face “fire and fury” if it threatened the US.

The US and South Korea are currently engaged in joint military exercises and the North’s missile tests are often in response to them.

Thousands of troops from both countries are participating in the drills, which are mainly computer-simulated exercises.