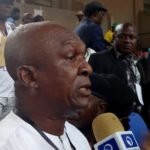 President of the Nigeria Judo Federation (NJF) Prince Timothy Nsirim has called on all aggrieved stakeholders especially his opponents during the recently concluded election to support his course so as to take the game to enviable height.

The former local government administrator had a smooth victory after the South West zone failed to elect representative from the zone, as Oshodi Musa, who has been on the board for twelve years and a candidate for the office of president and his rival in the zone, Bolaji Yusuf, a candidate for the office of Vice President had three votes each for five consecutive times.

Nsirim, who is returning as president, stressed that his sincerity of purpose and commitment to the growth of Judo in the country was the reason why he was returned on opposed by the delegates.

“We need not quarrel anymore; somebody must win an election but after the exercise, it is important we work together for the good of the game. I have called my people. Some have responded while others have not, the delegates voted for me because of my contribution to the development of Judo and they believe I am the man for the job,’’ said Nsirim.

The Rivers State born sports administrator said his objective now is to take Judo to the grassroots and attract the cooperate world to partner the federation in the development of Judo.

He stressed that Nigeria can be the destination for Judo on the continent, if persons of like minds work together and not administrators who are after what they will get from the system.

‘’My challenge here is to take Judo to the grassroots that is why I want people with like minds to work with me. Multinational companies should, as a matter of fact, invest in Judo and other sports in the country because back in their country they are part of the success story of their sportsmen but in Nigeria they display a lukewarm attitude to sports development.”

Nsirim, however, frowned at comments made by a high-ranking official of the sports ministry, Mrs Tayo Oworeme, who said any federation Presidents who does not perform in his first three months in office would be shown the exit door and a re-run conducted to fill the vacuum created.

“It is not going to be possible to make progress if we ease out under performing Presidents after three months office that is not the way to manage a system. For us in Judo, we are going to sit down and work out modalities that will help us achieve our goals, “he submitted