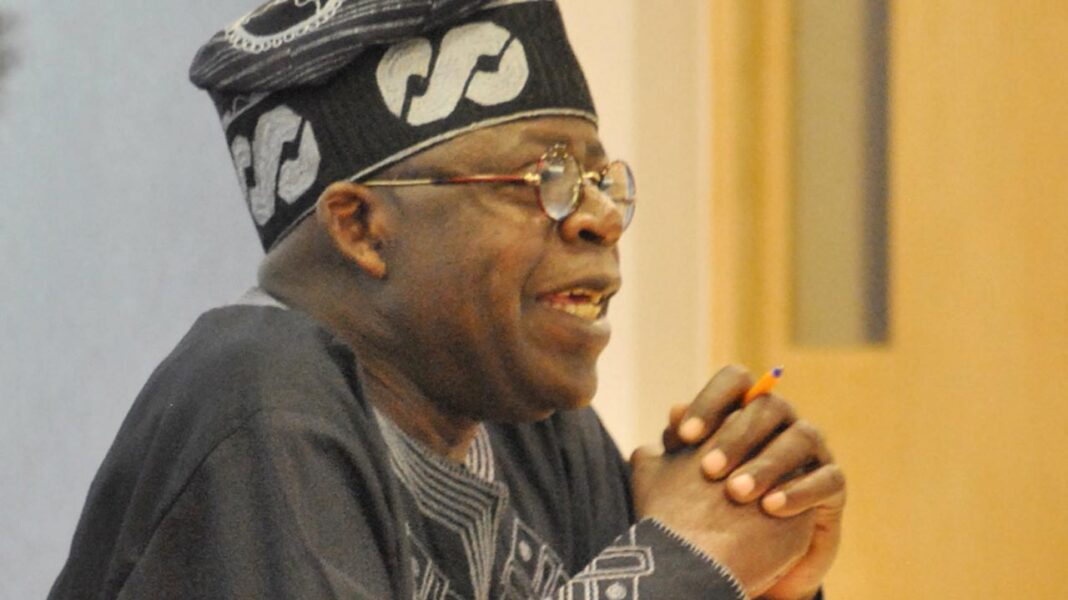 Nigeria news : Bola Tinubu attacks PDP, Saraki, reveals why APC, Buhari came on board in 2015
The National Leader of the ruling All Progressives Congress, APC, has described the previous government of the Peoples Democratic Party, PDP, from 1999 to 2015 as irresponsible and spendthrift.

The APC leader said that it was the pursuit of good governance, that brought the APC and President Muhammadu Buhari to power in 2015.

Tinubu also said that the Bukola Saraki led 8th National Assembly was controlled by reactionary elements that fought for business as usual and against reform.

The former Lagos State Governor made the remarks at public presentation of a book entitled “The Challenges of Good Governance in Nigeria,” written the founding Chairman of APC, Chief Adebisi Akande on Tuesday at Sheraton Hotel & Suites, Abuja.

“That led the people to elect and re-elect President Muhammadu Buhari. This pursuit has also shaped the public life and career of the person we honour here, Chief Bisi Akande.

“Over the years, obstacles to good governance were constructed so that a few people might unduly benefit at the expense of many.

“This process went on for years. It distorted our society. Our institutions became so corrupted that they often worked against their stated purposes. Vice became virtue. Governance turned into misgovernance and then misrule. Wrong became right.

“The social compact at the core of our collective existence was being disregarded if not discarded, not by the people but by those who led them.

“But justice and hope do not disappear. They remained in the hearts of man even during the worst of times. We have been on sometimes slow, but nevertheless inescapable evolution toward progressive good governance.

“First, we transformed from military to civilian governance. Now we transfer from the irresponsible, spendthrift governance of the PDP period of 1999-2015 to the advent of progressive governance in 2015.

“The road to good governance is tough; there have been obstacles placed in our way. However, this is the task we have assumed and we shall not deviate from this path for this is how we perfect our nation and live up to our best purpose.

“I have had a chance to take a cursory look at the book. The author has identified challenges to governance which are institutional, psychological, political and economic.

“Many of the issues raised in the book are matters of the deepest concern to our party, APC, and of President Buhari’s administration.

“For example, with regard to the institutional relationship between the presidency and legislature, you might recall that not too long ago the ability of this government to deliver on key aspects of its mandate was hampered because the National Assembly was controlled by reactionary elements that fought for business as usual and against reform.

“This situation has been corrected by the sovereign will of the people during the last election. What emerged is a new National Assembly leadership committed to progressive reform.

“As a result, we have seen the quick passage of the historic Deep Offshore (and Inland Basin Production Sharing Contract) Act, which substantially amended the financial terms of deep offshore oil production.

“Because of this, the government will gain billions of dollars in new revenue to be used for the development of our economy, its infrastructure all for the ultimate benefit of the Nigerian people.

“This achievement is not an isolated occurrence. It is a harbinger of other reforms to come now that the president has a reliable partner in the current National Assembly.

“History will look back and record this as a key moment in our progress as a nation. However, this moment would not have been possible but for the formation of the APC.

“And here I can tell you one thing; the establishment of the APC might not have taken place. For this single act, if for nothing else, the nation owes a debt of gratitude to Chief Bisi Akande.”