Newlyweds Pippa Middleton and James Matthews made their first appearance since their headline-making wedding last month at friend’s wedding in Stockholm, Sweden on Saturday. Pippa donned some dazzling duds for the wedding of her friend, entrepreneur Jöns Bartholdson, who married Anna Ridderstad in a lavish wedding.

For the event, Pippa broke with tradition (the one where you don’t wear white or black to a wedding) outfitted herself in black, white and floral Kenzie Gown from Erdem, which was originally priced at $3468. The dress is certainly a big departure from her very formal wedding gown, as the silk dress is quite bohemian and ’70s inspired.

Both Pippa and James look like they couldn’t take the smiles off their faces as they attended the “white-tie” society wedding. 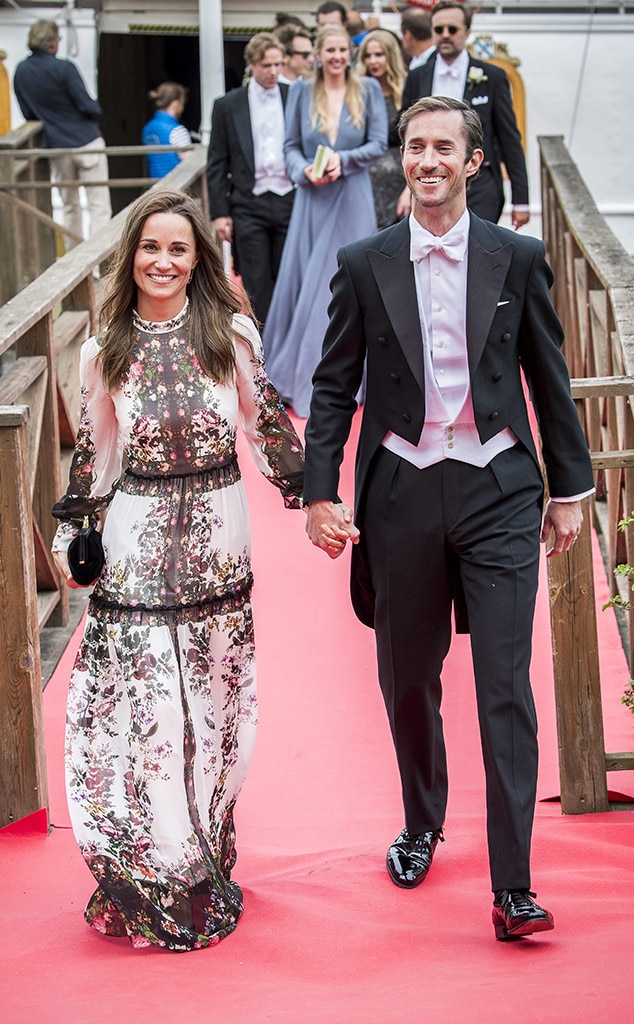 The elite couple was married at Stockholm’s Oscar Church, before the group took a steamboat to a Villa Pauli to continue celebrations.

According to the Swedish press, there were about 190 guests invited to the reception at Villa Pauli, a grand villa dating back to 1907.

That sounds all nice and good, but we don’t hear anything about a glass palace!

As for Pippa and James, the two have been traveling up a storm since their May 20 wedding in Berkshire, England, which is believed to cost more than $1 million.

After their own lavish wedding, the couple went on a two-pronged honeymoon, first vacationing on Tetiaroa, a tiny atoll, once owned by legendary screen star Marlon Brando, which is two-and-a-half square mile necklace of coral islets surrounding a lagoon.

While there, the couple wasted no time soaking up the sun while paddle boarding and taking strolls along the beach.

The lovebirds stayed at the island’s only resort, The Brando, an ode to Marlon Brando, the actor who made the atoll his personal sanctuary in 1967. The villa at the resort is believed to cost $3,900 a night.

Following their beachside getaway, the duo headed to Australia for the second leg of their honeymoon. While Down Under, the pair enjoyed a scenic ride around the Sydney Harbour in a taxi boat, soaked in the sights of the Sydney Harbour Bridge and Opera House, and got a tour of the city via seaplane.