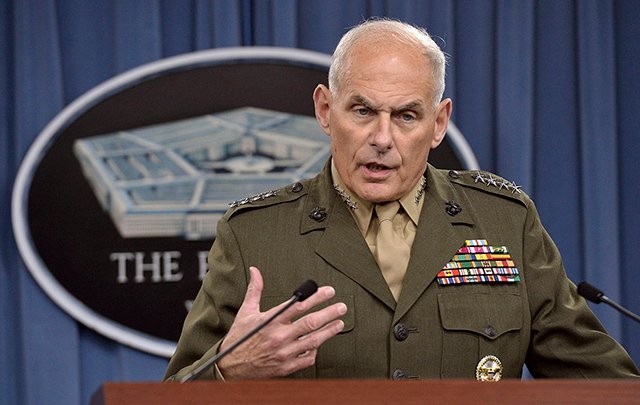 President Trump fired communications director Anthony Scaramucci on Monday at the urging of new White House Chief of Staff John F. Kelly, a clear sign that the retired Marine general is being empowered to manage what has been an unwieldy West Wing operation.

Kelly demanded Scaramucci’s departure after he attacked former White House chief of staff Reince Priebus in a profanity-laced interview last week that quickly became a public symbol of the vicious infighting that has helped define the first months of the administration.

Trump’s willingness to dismiss Scaramucci — whom he hired just 10 days ago — was viewed by many in the West Wing as an indication that he is eager to impose order and is giving Kelly the tools to do so.

“General Kelly has the full authority to operate within the White House, and all staff will report to him,” said White House press secretary Sarah Huckabee Sanders.

Left unclear is whether Kelly will be able to curb the president’s inclination to subvert pecking orders, his tendency to encourage rivalries among his staff and his insistence on managing his own message through social media in ways that have often undermined his aides’ strategic planning.

“This is a president that loves feedback and information, and he doesn’t like getting it through a chain of command,” said Trump friend Christopher Ruddy, the chief executive of Newsmax Media. “I don’t think that’s going to change.”

But Kelly’s arrival signals that Trump is putting his confidence in someone he perceives to have the stature and experience to be a forceful leader in a White House characterized by competing power centers.

After swearing in Kelly to his role during an Oval Office ceremony, Trump treated him to the formalities typically reserved for visiting heads of state. As the two sat shoulder to shoulder in armchairs for the benefit of cameras, Trump leaned in and effusively praised Kelly, who previously served as Trump’s homeland security secretary. He later lavished more praise on him during a Cabinet meeting.

“I predict that General Kelly will go down, in terms of the position of chief of staff, one of the greatest ever,” the president said. “We all know him, we respect him, admire what he’s done.”

Priebus was viewed inside the White House as being ineffective and having little control over other top aides, and the president had mused for months about replacing him. In one of the strongest indications that Kelly will have greater authority than his predecessor, Trump’s daughter Ivanka Trump and son-in-law and senior adviser Jared Kushner — both of whom advocated for Kelly to be hired — have expressed their willingness to support any structural changes Kelly might make, according to a White House official. Sanders confirmed that they, too, will report to Kelly, as will all other officials.

A Kelly-led senior staff meeting Monday morning was well received, said people close to the White House who described aides as feeling optimistic that he might create stability in the West Wing.

“He’s an adult and a disciplinarian,” said Barry Bennett, who was a Trump campaign adviser. “He walks in with respect. I don’t think people will go to war with him.”

But Kelly is planning to bring at least one senior adviser from the Department of Homeland Security with him to the White House. There are signs that these new hires may be met with a chilly reception, two people familiar with the matter said, raising questions about who will hold influence in a White House overloaded with aides competing for influence.

The White House has for months been dominated by warring factions, including a New York-based wing led by Ivanka Trump and Kushner, establishment Republicans, and Trump-allied conservatives inside and outside the administration, among them chief strategist Stephen K. Bannon.

Ivanka Trump and Kushner were instrumental in bringing Scaramucci into the White House in large part to oust Priebus, who led the establishment wing. After Scaramucci’s explosive interview with the New Yorker, in which he angrily accused Priebus in vulgar terms of leaking to the media, they soured on him and were supportive of Kelly’s efforts to oust him.

Over the weekend, Kelly told associates that he was dismayed by Scaramucci’s interview and found it abhorrent and embarrassing for the president. Removing him from the communications post is part of an effort to change the culture of the White House and to signal to staff members that their comments reflect on the president.

“This was the president showing General Kelly that he’s in charge and he has the ball and this has fingerprints of a clear sign that people need to fall in line,” said Blain Rethmeier, who helped Kelly with his confirmation process earlier this year after he was nominated to lead the Homeland Security Department. “One thing you’ll see is a new level of discipline and respect restored.”

Shortly after Kelly was sworn in, Trump presided over a Cabinet meeting in which Cohn said the White House is focused primarily on how to push the tax overhaul through Congress. Meanwhile, Short called on conservatives to pressure Senate Democrats in competitive states such as Indiana and North Dakota to support their plan. Mnuchin said the White House would be willing to jettison numerous unspecified tax breaks to make up for some of the revenue the government would lose by lowering tax rates.

While the administration has not been able to move forward on priorities such as tax reform, overhauling the health-care system and spending on infrastructure projects, Trump’s tenure has been dominated by investigations of Russia’s interference in the 2016 presidential election and whether any members of his campaign colluded with Moscow.

The president and top aides have blamed the White House communications operation for not doing a better job of pushing back against the Russia story and promoting his agenda — a situation Trump has often made more difficult with his statements on Twitter.

No other post in the White House has experienced as much upheaval as the communications director job. It was first given to Jason Miller, a Trump campaign aide who stepped down during the transition. It was then given to Republican operative Michael Dubke, who resigned in May. In the intervening weeks, Sean Spicer had taken on those responsibilities in addition to his role as press secretary until Scaramucci was named to the position.

Scaramucci’s tenure led to upheaval in the West Wing from the start, with Spicer resigning rather than working with the New York financier. Within days of entering the White House, Scaramucci threatened to stop White House leaks by firing “everyone” in the press office until the unauthorized disclosures ended.

Quickly, however, his feud with Priebus became his main focus. Scaramucci had at one point described their relationship as being like “brothers.” Later, he clarified that they were like Cain and Abel, two biblical brothers whose tumultuous relationship ended in tragedy. Cain murdered Abel, and was punished by God and condemned to a life of wandering.

When the New Yorker published Scaramucci’s profane tirade against Priebus and vulgar criticism of Bannon, he found himself on the defensive.

But it was Priebus who was let go Friday, making it look as though Scaramucci had won their power struggle. It was a short-lived victory.

“The president certainly felt that Anthony’s comments were inappropriate for a person in that position,” she said.

Trump was eager on Monday to move beyond the criticism that his six months in office have been marked by tumult and dysfunction.

Early in the day, he tweeted that there is no “chaos” in his White House.

Late in the evening as the dust settled on the latest staff turnover, he tweeted: “A great day at the White House!”

Robert Costa and Philip Rucker contributed to this report.