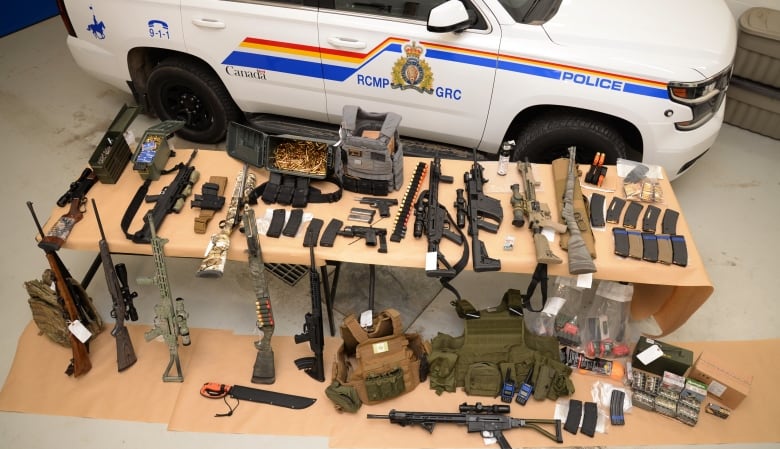 Previous criminal convictions, a willingness to die for the cause and connections to a violent insurrectionist movement.

CBC News has learned new details about some of the men and women arrested in connection with the Coutts, Alta., border blockades on Monday.

Thirteen people were charged following incidents involving physical threats to RCMP officers’ safety and raids on trailers near the protest area, which resulted in the seizure of a cache of weapons and body armour.

The on-and-off blockade of the normally busy border crossing by people opposed to COVID-19 health restrictions, lasted more than two weeks before protesters pulled out on Tuesday following the arrests.

Of the four southern Alberta men accused of conspiring to murder RCMP officers, two have ties to a man who founded a neo-fascist, white supremacist group that aims to accomplish its goals through violence.

Chris Carbert, 44, of Lethbridge, Anthony Olienick, 39, of Claresholm, Jerry Morin, 40, of Olds and Christopher Lysak, 48, of Lethbridge each face charges of conspiracy to murder, a weapons offence and mischief over $5,000.

Carbert and Lysak both have ties to Jeremy MacKenzie, the Nova Scotia founder of Diagolon, a group described by University of New Brunswick professor David Hofmann as an American-style militia movement.

I take from this report that this group at the Coutts blockade had a very specific list of people they planned on killing. It’s worth noting, as <a href=”https://twitter.com/antihateca?ref_src=twsrc%5Etfw”>@antihateca</a> has done really well, how closely linked they are to a prominent member of the Ottawa occupation. <a href=”https://t.co/ec3zjoMUWg”>https://t.co/ec3zjoMUWg</a>

According to the search warrant application filed in support of that raid, RCMP reported MacKenzie twice referred to Diagolon in the video.

The goal of the group, says Hofmann who studies far right movements, is to establish a “diagonal” white nationalist state.

Those who believe in the Diagolon movement feel a civil war is needed to create a new state that would run diagonally from Alaska, through western Canada’s provinces, all the way south to Florida.

“And they want to accomplish this through violence,” says Hofmann. “Their motto quite simply states gun or rope.”

Two Diagolon patches were found on body armour seized by police during the execution of the Coutts search warrants.

MacKenzie is currently in Ottawa and has posted at least one video in support of the arrested Coutts protesters in the last couple of days.

Willing to die for the cause

Several videos of MacKenzie’s diatribes have been posted to Carbert’s Facebook page.

In videos posted to his Facebook page, Carbert repeatedly said he was prepared to die in protest of government mandates.

“I won’t live long, I’ve come to terms with this,” he wrote in one post last October.

“I’ll likely be dead soon and likely will be front page news.”

“They can try to come for me and my family, but I guarantee it won’t go as smooth as they hope. I will die fighting for what I believe is right and I mean this!”

Although there is a widely spread conspiracy online among supporters of the Coutts protest that those arrested were outsiders, had just arrived in the area and were not part of the blockade group, a photo of a giant Canadian flag posted by Carbert’s personal Facebook page on Feb. 5, shows the signatures of nine of those facing charges.

Carbert has prior convictions for assault, drug trafficking and two drunk driving convictions.

“This is war,” said Morin, 40, in a video he titled “Call To Action” posted to his Facebook page.

The video was posted on Sunday, one day before Morin and his spouse Jaclyne Martin, 39, were arrested.

In the video, Morin and Martin — who faces charges of mischief and possession of a weapon — call on people to come to Coutts to participate in the blockade.

“Come on down tonight, there’s no excuses, this is war,” he says. “Your country needs more than ever now.”

A trip to Ottawa

Ursula Allred, 22, Justin Martin, 22, Eastin Oler, 22 and Janz Zaremba, 18, all grew up within a 15-minute drive of each other in towns south of Lethbridge.

The four are co-workers, all employees at an outdoor lighting company in Calgary.

Allred, Martin and Oler live together as roommates in the southeast community of Copperfield.

On Feb. 3, Allred posted photos of herself with friends at the Ottawa protests holding anti-Trudeau signs.

All four have been released on bail and none have prior criminal charges.

‘My god, please help us’

Joanne Person, 62, lives in Coutts within a few hundred meters of the border.

In fact, Person lives so close to the protest location, several of the protesters were storing personal items at her home, according to information detailed at her bail hearing Tuesday.

It was around 1 a.m. on Monday when she posted about RCMP officers coming to make their arrest.

“The full tactical is at my home they are [telling] us to leave the home and that they are entering,” she wrote.

Luke Berk, 62, has previous convictions for assault and drunk driving.

Evan Colenutt, 23, has previous fish and wildlife-related convictions including for hunting off season.

Colenutt’s eight co-accused, facing the same charges of mischief and possession of a weapon, were granted bail with the consent of the prosecutor, Steven Johnston.

Johnston did not say why he wasn’t prepared to support Colenutt’s release.

Johnson Chichow Law, 39, was convicted of assault with a weapon in 2002.

Over the years four other assault and weapons charges were withdrawn.

On Tuesday, RCMP said their investigation remains ongoing as they look into the extent to which those arrested are connected with broader insurrectionist groups across the province and country.