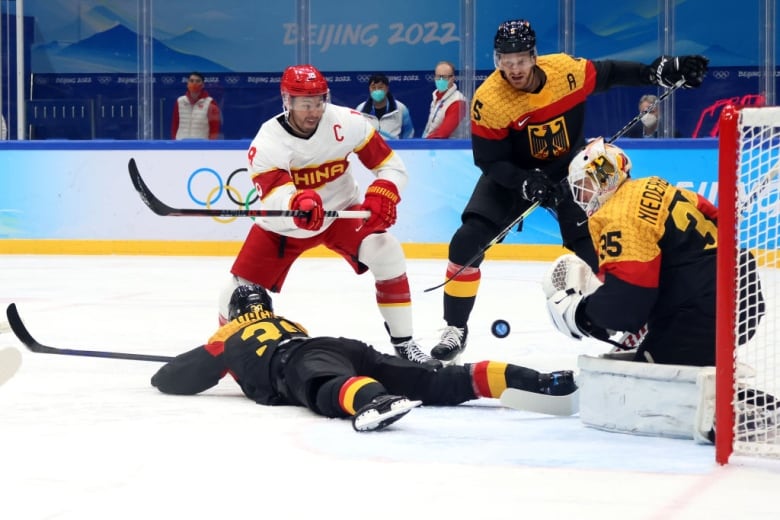 Brandon Yip has had hockey on the brain for more than 30 years.

His mother, Gale Yip, said he walked around the house with a hockey stick in his hand from the time he was three years old.

He would go on to play for the Coquitlam Express in the BCHL, then Boston University’s team and, in 2009, he made his NHL debut with the Colorado Avalanche.

In 2015, he left North America to play hockey in Germany, and made his way to China in 2017 to play for HC Kunlun Red Star of the Kontinental Hockey League.

Yip, 36, was then chosen to captain China’s Olympic men’s hockey team as they competed on home ice.

“It’s an extreme honour to captain these guys,” he told reporters after China was defeated by the U.S. team last week.

Back home in Maple Ridge, B.C., his parents have been staying up late to watch their son play.

His dad, Wayne Yip, described watching his son play in the Olympics as “surreal.”

“We never expected that he would get that far,” he said.

But Wayne says the butterflies he feels when watching his son take the ice in Beijing are just like those he felt watching him play house-league in B.C. — he just wants to see him do well.

The Yips said they would have been in China for the Winter Games had organizers not banned spectators from out of country due to COVID-19.

But having to watch on TV rather than in person hasn’t diminished their enthusiasm and support for their son.

“It really is an awe-struck moment as a parent,” Gale said. “We’re just so proud of him.”

Yip, who has three grandparents of Chinese descent, is one of 11 players on China’s 25-man roster who come from Canada, many of whom have no ties to the country they’re representing. Only six of China’s Olympic players are homegrown.

“Everyone in Canada comes from some place, they come from somewhere and we just happen to be of Chinese descent,” Gale said.

“For him to go back to [the place of] our cultural background and introduce the sport and develop it, it’s just an amazing sense of pride. I only wish my parents had a chance to see this happen because I’m sure it would have been very important for them to see this.”

Although the team lost all of their games and was eventually knocked out of the playoffs by Canada on Tuesday, Wayne thinks that, with time, China could become a hockey power on the world stage — “It might take 10, 20 years,” he said.

Yip says he hopes China’s games at the Olympics have generated interest in the sport in the country.

“We’re hoping a lot of young guys or girls, or anyone, any walk of life, watches us here in China and falls in love with the game like we did,” Yip said.

“If that happens, the sky is the limit.”