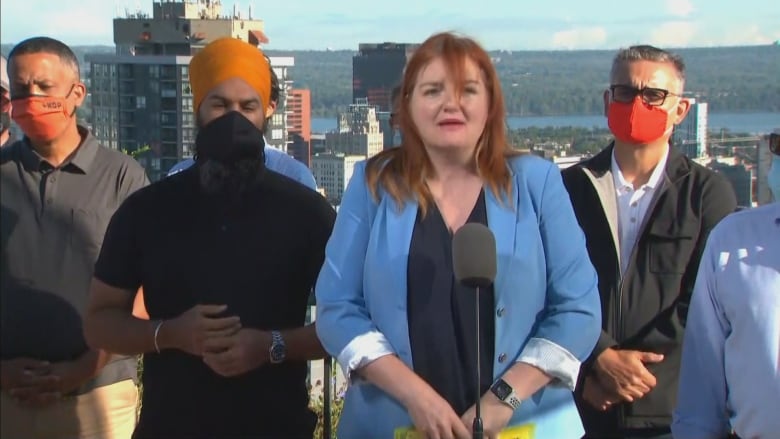 Leader of Canada’s NDP Jagmeet Singh on Monday used the occasion of Labour Day to talk about his party’s plans to make things better for workers.

On the issue of paid sick leave, he said the COVID-19 pandemic has exposed a lot of the gaps in the current system.

“One of the biggest gaps was, when times are tough and people got sick, they could not stay at home because they simply couldn’t afford to,” Singh said.

“For a family that’s just making it, just making ends meet, they can’t afford to miss a day of work.

“If a worker has to choose between going into work sick or staying at home and not having any pay, it is an impossible choice to make. It is simply impossible,” Singh added.

This was Singh’s second stop in Hamilton in less than two weeks. His stop Monday was made at a park named after a former city mayor and labour rights advocate. The site is also where the Hamilton Mountain riding begins — the party has held it since 2006 but current MP Scott Duvall isn’t running again — and overlooks the New Democrat stronghold of Hamilton Centre.

Singh slammed what he said is the Liberals’ lack of commitment to paid sick days for Canadians.

According to Singh, 22 times in parliament he has stood up and said Canada needs paid sick leave, and each time Liberal Leader Justin Trudeau said no.

Singh said while Trudeau has said no all those times, he is now promising paid sick say on the campaign trail, “all for show.”

The NDP leader is promising to introduce 10 days of paid sick leave for workers, if elected.

“We believe in putting in place 10 federally-regulated paid sick days, on top of that, working with provinces and territories to establish a paid sick leave program in every single province and territory for all workers,” Singh said.

“No one again should ever have to worry about going into work sick or not having enough pay at the end of the month. We will fix this.”

Executive vice-president of the Canadian Labour Congress Siobhán Vipond, who also spoke at the Hamilton event, said the pandemic has placed a spotlight on the inequality in Canadian society.

“And the only way we’re going to make that happen is if we have paid sick days in every jurisdiction in Canada.”

On the issue of child care, Singh said it has been known from before the pandemic that people were making the “incredibly difficult choice” of taking a job and pay for expensive childcare, or give up on their career and stay at home and take care of the kids.

He said that is a choice that women have had to make before COVID-19 and it’s only gotten worse since the pandemic.

“We know that women were disproportionately impacted by the pandemic and so our response coming out of this pandemic has to acknowledge those who’ve been hardest hit, and that’s why we’re so committed to making sure everyone in this country has access to universal, affordable, accessible child care and we will continue to fight for that.

“That is a workers’ right, that is something that will help women and that will build a better society,” Singh added.