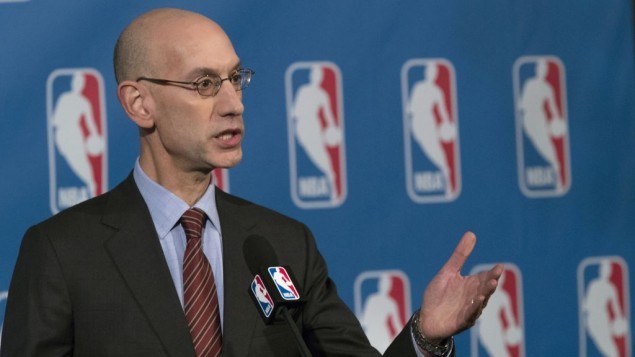 JERUSALEM — The NBA is heading to the Holy Land this week, bringing together some of the top emerging talent from across Europe as part of the league’s push to attract more foreign players and expand its global reach.

An NBA delegation, led by Commissioner Adam Silver, is in Israel as part of “Basketball Without Borders,” a program that hosts training camps for top teenage players throughout the world. The visit comes at a time when Silver is seeking ways to make improvements to a league that, while enjoying a surge in popularity, has seen its product impacted by the dominance of a handful of teams and a recent trend of healthy superstars skipping games to rest.

In an interview, Silver said the program aims to give players who have a legitimate chance of reaching the professional ranks a cultural and athletic experience that would be hard to match.

“It’s a realization that in order to develop as an elite player at a relatively young age, you need to begin competing against other elite players. And also you need the benefit of top notch coaching,” he said.

Some 60 of the top Under-17 players across Europe will participate- including 40 boys and 20 girls. They will get a chance to train under current and former NBA players and coaches, including Israel’s Omri Casspi, a new member of the champion Golden State Warriors, and Hall of Famer David Robinson, as well as leading figures from European basketball.

Off the court, the program also promotes cultural awareness.

“Whatever region we’re in, we educate the young folks about what’s happening socially, politically, economically in the area they are in,” Silver said. “It’s life skills in addition to basketball. It’s about the values of the game, like leadership and discipline and hard work and respect for each other.”

Toward that goal, the program will sponsor a series of clinics and workshops for local youngsters that will include Israeli Jews as well as members of the Muslim, Christian and Druze minorities. Palestinian children from the West Bank will also be participating, Silver said. On Sunday, for instance, the program will dedicate a new “learn and play” center at Jerusalem’s YMCA.

“We look for regions where we can have a bigger impact than just the game of basketball,” Silver said. Earlier this month, the program held a similar camp in South Africa.

“What we’d like to see is using basketball to build bridges between cultures,” he said. “I think it really is true that people, whether on a basketball court, or it’s on a soccer pitch, when they compete together they see how much they really do have in common. In this case, it’s a shared passion for basketball.”

Basketball Without Borders, a partnership with FIBA, the world’s governing basketball authority, has held camps in 26 countries since it was launched in 2001. This is the first time Israel, which is part of FIBA’s Europe region, has hosted the program. Forty-six former campers, including Casspi, have been drafted by NBA teams.

“I was a BWB camper in 2005 in Italy. To be a part of BWB now in my home country more than a decade later and to have the opportunity to work closely with these talented youth at the camp and conduct events in the community, is truly an amazing experience,” Casspi said. “I think the kids will have a fantastic time here while pursuing their dreams at BWB the next couple of days.”

The program is part of a push that has turned the NBA into a global sports powerhouse, second only to soccer.

Sam Dekker and Norman Powell check in from the first ever Basketball Without Borders in Israel! pic.twitter.com/CyedLfAmjO

The league says its games are now broadcast in 215 countries and territories, and Silver said basketball has made “enormous inroads” in China and is now gaining momentum around Africa and in India.

The league now holds pre-season games in China, regular season games in London and Mexico and broadcasts afternoon games on weekends to make them easier to watch in overseas time zones. The NBA also is in the process of launching soccer-style “academies” around the world to develop promising teenage talent year round.

Developing foreign talent makes good business sense. But it also has been good for the game. Some 25 percent of the NBA’s players are now foreign born, and international superstars such as Dirk Nowitzki, Steve Nash and Yao Ming have helped transform the sport in recent years.

Silver said that deepening the talent pool is the best response to complaints that the sport is dominated by a handful of powerhouse teams led by superstar players, leaving most teams without a chance of winning.

“It’s a nature of this sport. If you have certain players, you’re highly likely to be better than other teams,” he said. The best response, he said, is to develop more great players rather than place “artificial ceilings on how good a team can be.”

Silver said the off-season will also focus on some other league issues, including the problem of “healthy rest.”

He said the league will be starting a week earlier to allow for more off days during the season, will be reducing the number of back-to-back games and has eliminated the grueling practice of teams playing four games in five days.

Next month, owners also are expected to approve a new set of guidelines aimed at reducing healthy rest, he said.

“We’re trying to find the right balance,” he said. “We recognize that a certain amount of rest is necessary. … But we want to make sure that we sort of draw some clear guidelines for our teams when it is appropriate to rest players.”