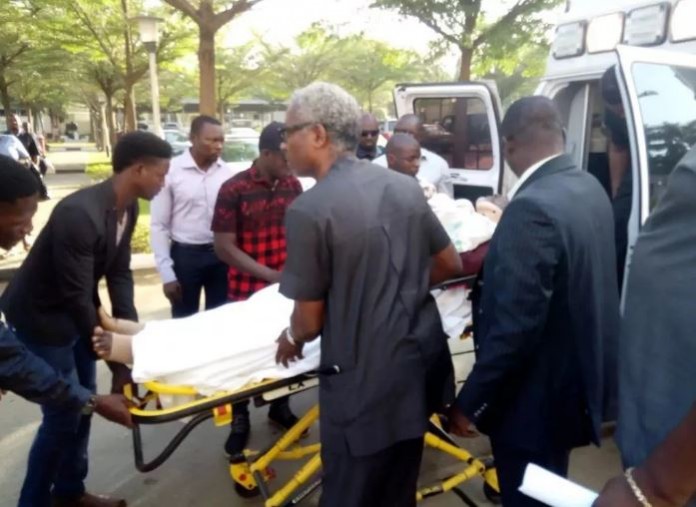 N400m fraud: Court rejects Metuh’s request to visit UK for treatment
ABUJA – Trial Justice Okon Abang of the Federal High Court in Abuja, on Thursday, declined request by embattled former National Publicity Secretary of the Peoples Democratic Party, PDP, Chief Olisa Metuh, to be allowed to travel to the United Kingdom for medical treatment. Metuh arrives court in Ambulance Metuh arrives court in Ambulance Justice Abang said he was not minded to direct the Deputy Chief Registrar of the court to release the International Passport that Metuh who is facing money laundering charges, surrendered as part of his bail conditions, to enable him to travel abroad. The trial Judge held that Metuh failed to persuade the court that he was indeed suffering from a life-threatening ailment as he claimed. Besides, Justice Abang accused Metuh of deliberately frustrating his trial with the same application the court had refused three times. He said the trial court had become functus-officio to grant such request to the defendant who he said had yet to appeal previous rulings that were delivered against him on the same subject matter. “I am wondering if the defendant is really sick as he claims. Why did he not appeal the two earlier decisions of the court that refused to release his international passport. “I doubt that he is really ill as he wants the court to believe, if he is, he should have appealed the decisions of the court at the Court of Appeal”, Justice Abang held. He stressed that Metuh ought to have known that where a trial court decided a matter, it could not be brought before it again under any guise. The judge wondered why Metuh appealed decisions of the court that had nothing to do with his health but refused to appeal rulings that pertained to his health. He maintained that contrary to claim by Metuh’s lawyer, Dr Onyeachi Ikpeazu, SAN, no new facts were raised in the application to warrant the court to deviate from its two past rulings to exercise its discretion in favour of the defendant. “The issues raised in this application have already been determined in the two previous rulings on the matter; there is nothing new in this application”, the Judge added. He upheld an objection the Economic and Financial Crimes Commission, EFCC, raised against Metuh’s bid to leave the country on health ground, adding that his third application amounted to a reckless abuse of the judicial process and deserved to be dismissed. The court directed Metuh who was brought to court in a wheelchair to continue his defence to the seven-count corruption charge EFCC preferred against him and his firm, Destra Investment Limited. Metuh had on March 14, begged the court to allow him to seek medical attention in the UK, decrying that he has lost sensation in his lower limbs. Metuh said he was suffering from spinal cord related ailment. His lawyer told the court that Metuh’s health had deteriorated badly, a situation he said would require urgent medical attention from his doctors in London. He tendered as an exhibit, a letter from one Dr. Adrian T. H. Kasey, a Neurosurgeon at Wellington Hospital in London, which he said emphasized the need for Metuh to be treated urgently. The former PDP spokesman predicated his application on section 33(5) and 6(b) of the 1999 Constitution. However, Justice Abang requested both the prosecution and defence lawyers to address him on whether the court could grant the request considering that he previously dismissed two similar applications on May 25, 2016 and on February, 2017. Metuh is currently defending the seven-count charge the Economic and Financial Crimes Commission, EFCC, preferred against him and his firm, Destra Investment Limited. EFCC alleged that he had before the 2015 Presidential election, received N400million from the Office of the National Security Adviser, ONSA, without executing any contract. The agency alleged that the fund was electronically wired from an account that ONSA operated with the Central Bank of Nigeria, CBN, to Metuh, via account no. 0040437573, which his firm operated with Diamond Bank Plc. It told the court that the fund which was released to Metuh and his firm by detained former NSA, Col. Sambo Dasuki, retd,‎ ‎was part of about $2.1billion earmarked for the purchase of arms to fight insurgency in the North East. Besides, the prosecution which had earlier closed its case after it called eight witnesses that testfied before the court, equally alleged that Metuh was involved in an illicit transaction that involved the exchange of $2million.